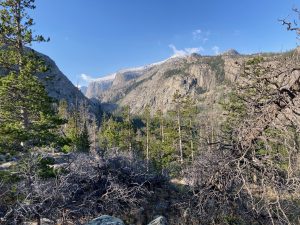 Though the Wind River Range has its share of spires and sharp-peaked mountains, more striking are its steep-sided glacial cirques and valleys, often carved out of a broad plateau. The summits on this pre-glacial plain are often mere talus mounds, with the most difficult part of reaching them being finding a way out of the surrounding valleys. Torrey Peak and Middle Mountain are a sort of rectangular island between the East and West Forks of Torrey Creek, which flow together at its northeast corner, then nearly join at their headwaters to its southwest. Both peaks are around 12,000 feet, and lack dramatic lines to attract ambitious mountaineers, but I thought Torrey would be both a good adventure and an interesting vantage to view the higher peaks to its west and south, and the great Wind River plateau to the northwest. It is also reasonably close to the Trail Lakes trailhead, making it appealing on a windy day with fresh snow up high. 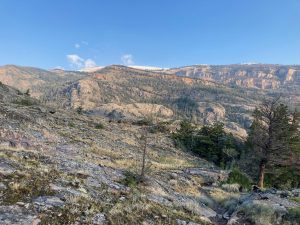 Renee and I had set up a car shuttle between Dubois and Lander, so I was reduced to sleeping in my tent. Though the Alps Palace is more spacious than the back of my car, it is less familiar and also less wind resistant, so when a violent storm blasted through at 3:00 AM, I lay there dry but unable to sleep. The storm passed by around 4:00, the full moon reemerged, and Renee started on her crazy project. Suspecting that the storm would have left snow up high, I managed to get a bit more sleep, then started around 7:00. There are four trails leading west and south from this trailhead, and I took the “new” Glacier Trail, which follows the East Fork Torrey Creek before switchbacking up to the plateau where it joins the Old Glacier Trail. I saw Renee’s footprints in the freshly-washed trail, and snow from around 10,000 feet, whipped to spindrift by the forecast southwest winds. 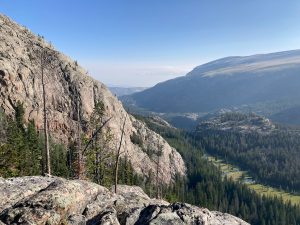 The Glacier Trail crosses the West Fork Torrey Creek at a narrow slot, then follows the East Fork through woods and open meadows, with views of the upper valley’s sheer walls. I left this popular trail where it switchbacks up to the plateau, following a fainter trail up-valley to Bomber Falls. The trail, faint but helpfully cairned, ends at an old ruined cabin near where the creek is flat and braided. Looking at the topo map, I saw two possible routes up to the Middle Mountain plateau: a lower-angle slope farther upstream, and a steep ramp next to a cascade across from the cabin. The bushwhacking looked unpleasant in the valley, so I chose the latter, finding a series of logs to cross the stream’s braids, then thrashing my way to the cascade’s base. 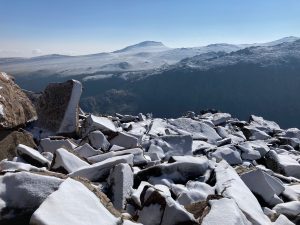 My ramp worked, but its wet, outward-sloping slabs were sketchy in places, requiring patience and some detours. I eventually emerged on the plateau, and began the long hike southwest toward Torrey. The range rises from the plains to its east in a uniform uplift, and the spindrift I saw spoke of savage winds, but my route was protected by sparse trees down low, and by higher terrain to the south and west. Unfortunately, there were 2-3 inches of fresh snow covering the talus and tundra, turning what would have been a straightforward walk and boulder-hop into careful crawling over boulders mixed with foot-soaking slogging up grass covered in melting snow. At least I probably had it better than Renee, who was dealing with similar conditions plus wind. 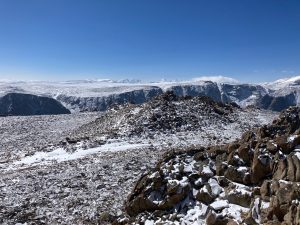 Progress was infuriatingly slow, but there were no major obstacles on the plateau. I wandered a bit in search of easier progress or shelter from the wind, and was occasionally stymied by boulders too large to surmount when slick, but with patience I reached the summit before mid-day. I found two registers in the cairn, an old jar and a newer waterproof plastic box. I quickly grabbed one, then hid from the wind that assaulted me and threatened to knock me back. The jar’s lid was stuck, so I tried to loosen it by tapping it against a rock, clumsily hitting it too hard, shattering the glass and cutting my wrist. Fortunately there was another waterproof container, because the register was a surprising treasure: a McLeod and Lilley from 1996, more evidence of the wide wanderings of these two prolific Sierra peak-baggers. There was less than one entry per year, with several mentioning seeing sheep or sheep signs. I had seen a few in the distance on my slow approach, and had crossed their fresh tracks in the snow. The isolated plateau seems like a good safe place for them to hang out in the short Wyoming summer. I added my name, had a snack, then returned to the summit just long enough to put the book in the other container before carefully spidering my way back out of the wind. 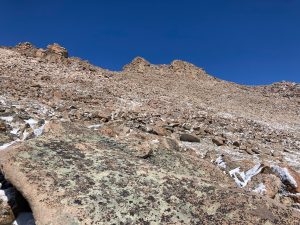 The terrain gradually improved on the way to Middle Mountain, partly because there were more grassy benches, and partly because the snow was melting quickly. The best line was also sheltered from the wind, making this part of the day increasingly pleasant. As I found when I popped out on Middle’s summit, though, the wind aloft was every bit as strong, nearly knocking me over as I made a cursory search for a register, checked my messages (sigh…), and searched for a way off the northeast side. I had plotted a route down the north side to Lake Louise that looked feasible, so I headed in that direction, gradually replacing the inconvenience of snow with that of plants.

Somewhere along the way I began following a faint trail, and I soon spotted a couple of cairns. I had noticed in Torrey’s register that some people had traversed from Middle, so as I suspected, there was a semi-established route in this area. I lost and re-found the trail as it made its way toward my planned route and slowly became better-defined. By the time it diverged to drop into the East Fork Torrey Creek, it was clear enough that I abandoned my plan without hesitation. Given the number of sawn logs, it had clearly been an established route at some point, though I am not sure of its purpose, as there are no lakes to fish on Middle Mountain, and I had not seen a cabin. It eventually faded into the grass in the valley bottom, where I easily forded the creek to rejoin the trail I had taken that morning. From there it was a pleasant jog to the car. I was disappointed but not surprised to find that Renee, encountering the same snow-covered talus that I had, but higher up and earlier with more wind and cold, had decided to return early. We headed into Dubois for groceries and WiFi (free at the park), then headed out to camp and do some easier exploring while the Winds melted off.