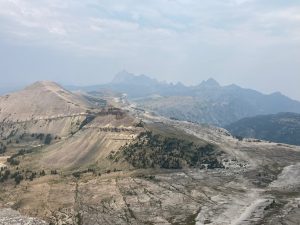 Darby is probably the most popular of the Idaho-side Teton canyons, lying close to Jackson and with a short, easy trail to the Wind Cave. While it is hardly crowded, I would see dozens of people on my outing, instead of the handful I had seen farther north. However, for most of the day I was on trails and terrain where there were no people and few footprints. North Darby Creek cuts east-west through the Tetons’ uplift limestone plateau, which rises more or less southeast. The result is a canyon with a steep, cliff-studded north side, fed by multiple broad, sloping valleys to the south, separated by sharp fins. At the head of these valleys is a line of broad, conical limestone peaks stretching from Mount Meek to Fossil Mountain. One of my maps showed a trail up the north side of North Darby, and I knew the Wind Cave trail in South Darby; the two trails would turn the peaks into a convenient loop. 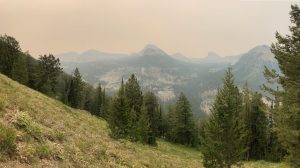 I camped lower in the canyon where I had cell service, then biked to the trailhead, passing a couple of cars coming down, and several more people camping at various spots along the creek. I locked my bike to a small aspen for show, then took off up the main trail, looking for some kind of junction. I thought I had found it just before the bridge, and was initially encouraged by a couple of cut logs. I happily followed the trail up the valley floor for awhile as it became braided and faded, only too late concluding that I had gone awry. Looking at my map, I saw that the supposed trail had climbed well up the north side of the canyon to avoid some cliffs and a constriction ahead. 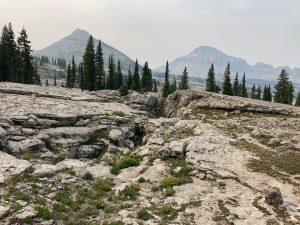 I dutifully bashed up toward the trail, following game paths or simply plowing through brush, and was making steady progress when I ran into a small cliff band. After looking to either side, I found a place where I could climb it, and thrashed to its base. Here I learned that the Tetons have burrs this time of year, when I looked down and saw that I was covered from ankles to chest. Brushing them with my hand or a stick had no effect, and they were spiny enough to poke through my shirt, so I spent ten minutes picking most of them off one at a time with finger and thumb. That out of the way, I climbed a bit of fourth class choss, then continued bashing up and left until I found a well-defined and -constructed trail. Sigh… 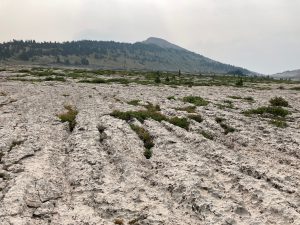 This trail stays high on the hillside, climbing as the valley rises and traversing several seasonal streams, no longer running toward the end of a hot, dry year. I was concerned about finding water, but fortunately found a small spring-fed stream near where the trail reaches the open plateau at the valley’s head. The path fades as it hugs the left-hand side of the plateau, but was still easy to follow where I left it to head straight for Mount Meek. The plateau looks simple from above, but is actually a complex surface with short cliffs at the edges of limestone layers. The rock is too hard to erode, but does not hold soil in most places, so the plateau is mostly barren. It is also dangerously sticky and spiny, making running treacherous. I threaded my way toward Meek, and was surprised to find a line of cairns along its base. The eastern edge of the plateau is a cliff, cutting this trail off from Alaska Basin and the Death Canyon Shelf, so the cairned route was unexpected. Reading other trip reports online, I learned that there is a way down from Meek to the east, so perhaps the trail leads there. 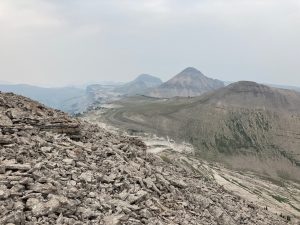 I slogged up the peak’s west side, then picked my way along the north ridge to the summit, finding a bit of a trail in places. Below, I could see a couple of backpackers on the Teton Crest trail. It was a bit like looking at animals in a zoo, with them obliviously walking through the “Real Tetons” within shouting distance, while I sat safely above a limestone wall. Not finding a register, I ate one of my five remaining food units, then headed toward Mount Jedediah Smith, another peak of similar height and shape. I descended toward the saddle, trying to get off the treacherous limestone talus and onto grassy terrain as soon as possible, then headed up the peak’s easy northeast side. I consumed another food unit, then continued in similar fashion toward the larger Mount (Steve?) Bannon. 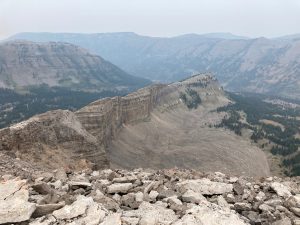 I planned a similar arc up and down the grassier, gentler east side, but found a mountain goat trail along the northern edge, which I followed most of the way to the top. I kept an eye out for goats, and was a bit disappointed not to see one, though I did find a tuft of hair on a thistle. Both, it turns out, are invasive species, and while it is probably impossible to eradicate thistles, the Park Service is doing its best with guns and helicopters to get rid of the goats, which were introduced from farther north for hunters’ enjoyment. Bannon’s summit is a long plateau, with a view of the long, steep ridge extending back toward Darby, and of Fossil Mountain to the south. 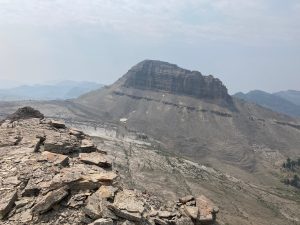 Getting off Bannon was a tedious process, slowly meandering down limestone talus and small vertical steps. Once back to vegetation, I made good time to the next saddle, then scrambled up the ridge to Peak 10,612′, a minor bump along the way. From there I descended to the broad valley before Fossil, then contoured around its left side on a broad, tilted bench. Fossil’s southeast ridge looks steep, but because the uplift rises in that direction, is a straightforward climb, with a few short, fun class 3 sections and positive holds. Reaching the blocky summit plateau, I hopped over to the summit cairn, then stood to take in the view while eating my last sandwich. The weather was changing, and the winds had lessened the smoke enough that I could see the Real Tetons’ outline in the distance to the northeast. 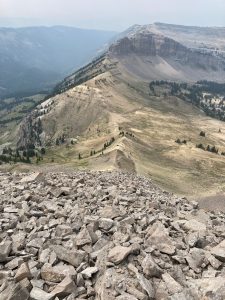 Making my way toward the head of South Darby Canyon, I picked up a bit of a trail, which faded in and out through the day’s loosest and most treacherous talus, then became clearly-defined near the bottom. I followed the ridge to where the old trail crosses to Fox Creek, then headed down-valley, staying generally right. There were bits of old trail and cairns here and there, but the cross-country travel was easy. Once on the Wind Cave trail I began to see people, including a massive, hormone-filled high school running team. I met my fill of people as I jogged down the trail, then had a pleasant, cooling ride down the trail back to camp for another night on the peaceful side of the Tetons.