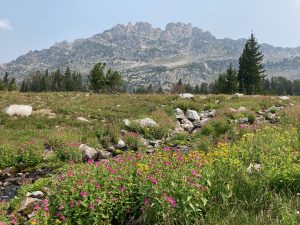 Cleaver Peak is a small but striking summit at the head of Moran Canyon, in the seldom-visited northern part of the Tetons. It is a north-south fin with two summits of nearly equal height. I had tried to reach it on a couple of occasions: first from Cascade Canyon, when I realized that the distance was too great to cover in June snow; and second from Leigh Canyon to the east (there is also one to the west), when I ran out of energy after tagging neighboring Maidenform and watching the total solar eclipse. I now knew how to reach the peak, so I made a detour on my long drive back to the Tetons to finally tag it. I made things difficult for myself by starting up the South Fork Leigh Canyon this time, by choosing a less-than-great approach line, and by climbing both summits, but it was still a reasonable day of about 20 miles with no headlamp. 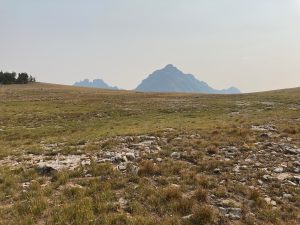 I started off on what I thought would be the quickest route, the South Leigh Creek trail, which immediately crosses the creek before heading up the nearly-flat valley through woods and meadows. The trail was in decent shape, and unlike in the Cascades, the plants encroaching on it were dry and did not soak my legs. This area does not see a lot of use even by Idaho Teton standards, and I met only one other person all day, a guy headed out the South Leigh trail. At a trail junction, the signs told me that I had taken the long way up the canyon — oh, well. I continued on the meandering route through Granite Basin, then left the trail to head for the saddle north of Littles Peak, taking the same route I had used to reach Maidenform. 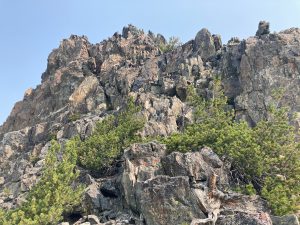 Rather than going over Maidenform’s summit, I decided to traverse around to the saddle between it and Cleaver. I soon regretted this choice, as I was faced with endless side-hilling on rock-hard dirt and angle-of-repose scree, with some crags and cliff bands forcing me to wander up and down. In the midst of this unbearable slowness, I pulled out my phone to read the Peakbagger trip report from the one guy admitting to climbing the peak. I just shook my head at his description of “stellar rock” traversing between the two peaks. I eventually made it past Maidenform, and headed up some loose ribs and gullies to the ridge between the two peaks, where the “stellar rock” continued to remain elusive. Instead, I found a mix of choss-gendarmes and scrub pines; it was not the worst such I had encountered, but still something to be borne rather than savored. 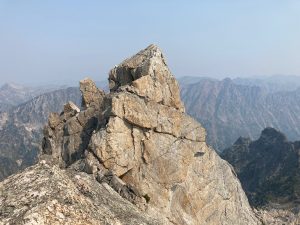 Both Peakbagger and my map show the summit as the southern peak, so I aimed for that, finding a bit of fun class 3 climbing as the black rock steepened along the ridge. Things turned a bit more serious as I reached the white summit cap. As I have found in the Tetons, this type of rock can be rounded and slick, making things more difficult than they appear. I traversed into a gap, then had more trouble than anticipated on the final pitch to the south summit. I ascended a bit right, then traversed left on an outward-sloping ledge to a small bowl. I inspected my options there, then chose a steep mantle right on positive holds rather than a more exposed but gentler sequence left. From there, easier terrain led to the south summit. 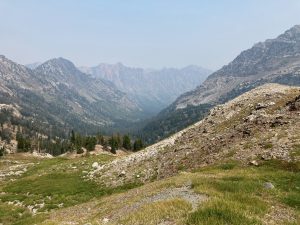 None of what I had done matched the description of 5.4 chimneys I had read online, and the north summit looked suspiciously higher. Pulling out my phone, I miraculously got service and searched out a route description, which confirmed my suspicion that I was on the wrong summit, and well off-route. Making the best of this bad situation, I continued north, descended some class 3 terrain to the east, then went through the cleavage between the two summits. The west side of the north summit is a maze of ledges connected by cracks. From my gap, I found a wandering route ending in a short chimney that felt about 5.4 and deposited me on the slanted summit plateau. I walked over to the cairn, then sat down to consider my options. 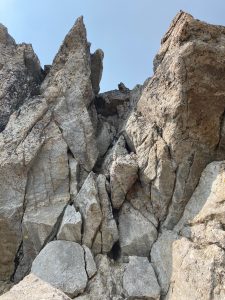 After some contemplation, I decided to try to find the “standard” route on the way down. This proved straightforward, as climbers had festooned it with colorful garbage. I removed what I could as I descended, and found a route far less enjoyable than what I had ascended. The upper “5.4 chimney” on the east side was a dirty, awkward slot, while the lower one on the west side required a sketchy bit of downclimbing at the bottom that felt harder than 5.4. A wandering route up the west face, using a better approach than the one I took, is a preferable way to climb this peak.

I looked for that better approach on my way home. There are several cliff bands below the north summit, which I skirted by heading south. I aimed for the ridge north of Point 10,345′, finding easy terrain once I had reached the valley. I had only experienced Moran Canyon as a savage bushwhack near Jackson Lake, so it was a joy to traverse its friendly, remote, and unspoiled upper reaches. Once back over the ridge, I descended to the trails in Granite Basin, then took the shorter Andy Stone trail back to South Leigh Creek and the car. Cleaver Peak is a fair journey from any trailhead, but a reasonable and pleasant day once you know what to avoid.