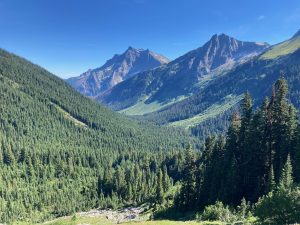 Summitpost describes Buck as “one of the man-mountains of the Washington Cascades.” Though only three miles from the Trinity trailhead to its southeast, and only class 2-3 from the southwest side, a high and rugged ridge extends north and south from Buck, and there is no road or even trail up the lower Napeequa River to the west. The “normal route” is therefore shockingly roundabout, approaching the peak’s west side either over Little Giant Pass to the south, or on a high route from Buck Pass to the north. There is also a direct class 3 route from the east near Alpine Creek, involving a river ford and a savage bushwhack through steep and brushy forest, that is recommended for descent but can of course be done both ways. The Summitpost page also mentions that the northeast ridge is “class 4 or 5,” which sounds like my kind of route. 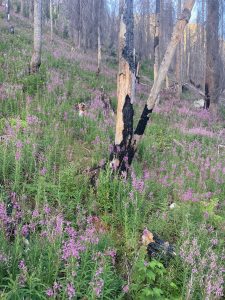 With these options in mind, I made the long drive up the Chiwawa River Road to Trinity, and started off around dawn planning to do at least one of these routes. Passing the place for the Alpine Creek route, I decided that I did not want to do that to myself. I continued after the split toward Buck Pass, finding that the bridge was not “out” as advertised, but was probably no longer suitable for my horse. Nearing the turnoff for King Lake and the northeast face, I entered the burn area for the 2016 Buck Creek fire. The forest was in a near-perfect state for cross-country travel, with the trees and underbrush incinerate, but the nasty things that follow a fire not yet established. The main type of plant was fireweed, a bush that is easy to whack. I contemplated the route while I ate a sandwich, then took off across the wasteland. 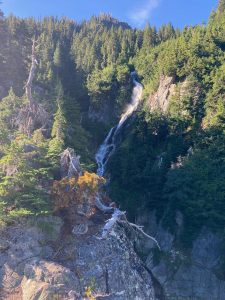 The first obstacle was crossing Buck Creek, but I found a perfect log bridge almost exactly where I needed it. There was even a sort of tunnel through the otherwise-impenetrable alders. Beyond, I followed various deer tracks up the burn, staying on the left side of the drainage and well away from the unburnt alders to the right. I eventually entered steep woods above the burn, and the deer trail faded. Not sure what to aim for, I decided to traverse right to reach open terrain I had seen from below. This turned out to be a savage hell-schwack, variously fighting my way through alders, steep scrub pines, and cliff bands littered with fallen burned trees. After avoiding some of these cliffs, I realized that the rock was fairly solid with a grain that worked well for climbing this way, and simply headed up some class 3 crags, grateful to finally be making upward progress again. 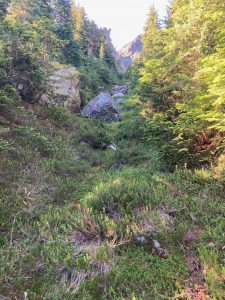 Reentering the woods higher up, I found myself on the left side of a deep cleft with a healthy cascade running through it. This was rocky enough to discourage the plants somewhat, so I stayed near the edge as I made my way upward, hoping I could cross the cascade easily higher up. I saw what I thought was a cairn in an open, slabby section, then a few cut branches and a bit of boot-pack higher up. Success! I lost and re-found the ancient fisherman’s trail a couple of times, taking my time and eventually ending up in an open, grassy ravine leading easily almost to the east side of King Lake. I have no idea what this “trail” did lower down, and that part has been obliterated by the fire, but I was grateful for what I found. 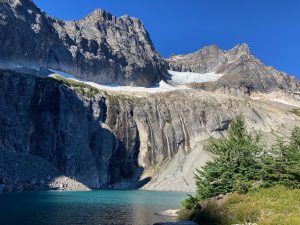 King Lake proved as spectacular as I imagined it would. Buck’s small northeast glacier sits perched in a bowl above the lake, sending cascades of milky melt-water down the cliffs that ring the lake to its southwest. I found a couple of fire rings with fresher-than-expected ashes in them, but I can’t imagine this cirque sees much traffic. Making my way around the lake’s north side, I climbed rubble and easy slabs to the toe of the glacier, putting on crampons to cross one hard snowfield. I avoided the snout and broken-up lower glacier to the right on decent rock that became grittier as I progressed, then returned to the glacier where it was a bit more continuous. The travel was mostly easy, but it was surprisingly possible to fall in a crevasse if one were oblivious, as opposed to having to find one and jump in it. 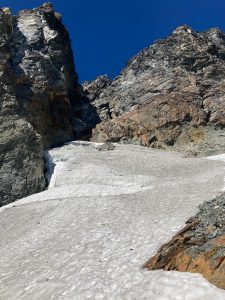 The top of the glacier is separated from the mountain’s east ridge and south face by another wall of cliffs, the only potential exit being at the upper right side. I made my way for the highest tongue of snow, passing someone’s father’s ice axe on the way. This tongue probably used to extend into the gully above, but it was now separated by an expanse of steep dirt and scree. I sketched my way up this, aiming for the obvious gully to the left. The gully was made a bit more obvious by an ancient piece of tat, originally yellow and now bleached completely white. I was once again annoyed at Cascades mountaineers for leaving garbage on routes (who would rap this?!), and at myself for not bringing a knife to remove it. 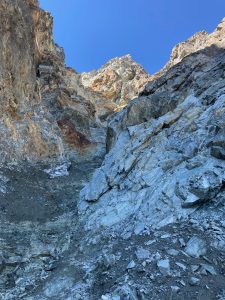 There was a bit of easy fifth class to pass the webbing, but above it looked like the angle eased. If only… Earlier in the season this would probably be a steep snow climb to the summit ridge, but now it was wet gravel, choss, and gritty slabs that often angled in the wrong direction. I worked my way up the right side of the gully, using the wall for handholds or to stem against the dirt. After a failed attempt to exit early to the right, I exited out the top, making a few wide stems against some reddish rock. Above that, I finally managed to traverse right on improving rock, and soon popped out between the north and south (true) summits. 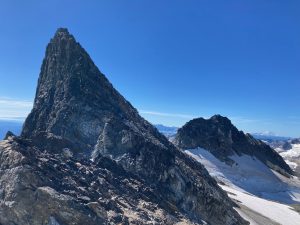 The south summit looks incredibly imposing from this saddle, showing only its narrow east-west profile. I scrambled up the layered slabs to the summit, where I quickly pulled the register out of a cairn guarded by flying ants, then sat a safe distance below to look around in the remarkably clear air. To the west were recently-climbed Clark and Luahna, along with the rest of the Dakobed Range, showing the glaciers that clearly make them a better ski than scramble. North was Berge, across a weirdly broad and flat saddle. I also had great views of the Entiat peaks, Bonanza, and even Baker and Rainier at the far ends of the range. 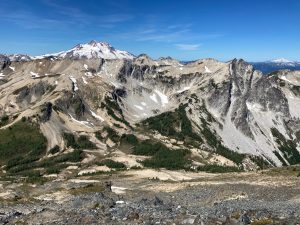 Descending from the summit, I crossed the small, flat glacier nestled between Buck’s summits, then descended toward the saddle with Berge, entering a surreal landscape of pumice and larches. As this region demonstrates, the Cascades’ geology is incredibly complex. Between Buck’s ancient dark rock (schist?) and Berge’s Sierra-esque white granite lies a small region of pumice reminiscent of a recent volcano. This is presumably from the same event that created Glacier Peak, but does not seem to connect in an obvious way. 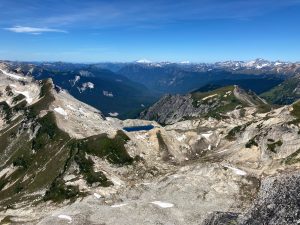 Through this section I began picking up bits of use trail, leading more or less where I wanted, toward Berge’s northeast summit. Most maps incorrectly label Berge’s southwest (easier) summit as higher, but as seems clear to the naked eye, and as Eric Gilbertson demonstrated with a surveyor’s level, it is not the highpoint. I tagged both for good measure, finding the northeast no harder than class 3 and reminiscent of the Sierra except for the green things between the granite boulders and the deposits of black lichen on some aspects. Berge’s north and west sides are cliffy, so it is necessary to circle southwest to a saddle and descend west before circling back around north. Fortunately I had downloaded some other climbers’ tracks, as otherwise I would have dropped all the way to the valley bottom instead of making the improbable high traverse.

I finally reached a trail in this Sierra-like basin, with its clear, shallow lake and white granite, and from there it was a short hike to High Pass. The trail from these lakes to Buck Pass is one of the most scenic and runnable I have found in my years in the Cascades, reminiscent of nearby White Pass but lacking the PCT hordes. I had miles to go before home, but they were all downhill and easy trail, with clear views of the glacier-y sides of the Dakobeds and Glacier Peak. 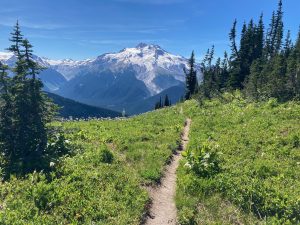 With time and energy to spare, I decided to tag a couple of easy peaks along the way. The first was Mount Cleator, named for Trinity local Cletus McCoy’s tabletop D&D character. Cleator met his untimely end when Cletus’ cousin Brigitte “Berge” Hatfield made him promise to give up his boozy Friday gaming sessions as a condition of their engagement. Despite its unfortunate genetic consequences, the union was a key step in reconciling their feuding branches of the family. Mount Cleator has two summits, a grassy walk-up separated from a fierce crag by a steep notch. The grassy one looks a bit higher and has a register, and I did not have enough curiosity or energy to try to reach the other.

I returned to the trail after Cleator, then took a side-trip to Rally Cap on the way down to Buck Pass. I pulled out my map to find my way through the mess of trails here, but eventually got on the popular Buck Creek trail. I am not a trail runner, but I had been enjoying my jog from High Pass, and the Buck Creek trail was pleasant in its own way, smooth and gently-graded, with good shade and frequent water sources. I started to feel pretty run-down once the trail reached the valley bottom, but managed to mostly hold it together and maintain a jog back to the car. According to my phone, the whole excursion was about 26 miles with 10,000 feet of elevation gain, all in a bit under 12 hours. It was a satisfying use of what may be my last (smoke-free) day in the Cascades this year.

Not suitable for stock

King Lake from above

Did dad lose something?

View down from above choss gully

Fire to the south

Ridge down to Buck Pass