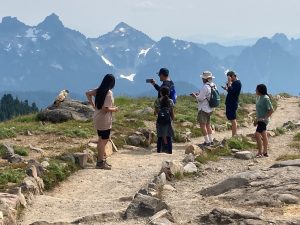 The route lived up to its name… so perhaps it didn’t. 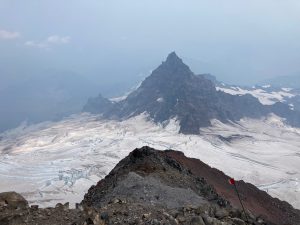 Rainier and Little Tahoma were two of Jason’s last peaks on his crazy Bulger quest, and I had wanted to do Little Tahoma for awhile. We had originally planned to do them both in a day, but the crossing of the badly-crevassed lower Ingraham Glacier, and the subsequent crossing of the dirt-ridge between it and the Whitman, looked dicey and unlikely to work. So instead we returned the next day to do the standard route on the peak, via Fryingpan Creek and the Fryingpan Glacier. This turned out for the best, despite the extra driving and elevation gain, as the standard route up Little Tahoma is more fun than either route I have done on Rainier (DC, Emmons). The glacier travel is non-threatening, the rock is surprisingly good where it gets steep, and the summit view from between the Ingraham and Emmons Glaciers is hard to beat. 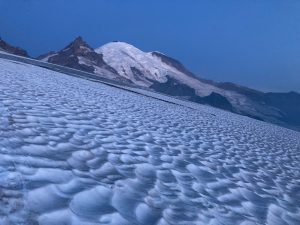 Unlike last time, we got a proper alpine start, leaving the Fryingpan Creek trailhead by headlamp at 3:00 AM. This part of the Wonderland trail is wonderfully smooth, and we both looked forward to running it on the way down. The trail follows the creek, then leaves to switchback south toward Summer Land at 6,000 feet. From there, the route leaves the trail to climb steep talus to Meany Crest before finally reaching the glacier beyond a knob at 7,500 feet. It was still full dark when we left the trail, so there was a bit of the usual faffing around that comes with nighttime cross-country travel, but we did not lose much time, as we were soon on open terrain. 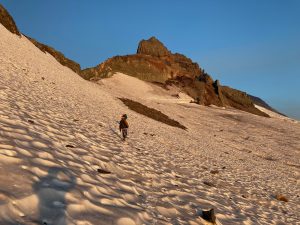 At the knob we met half of the film crew, Lauren and Anna. The other half with the cameras, Luke and Baxter, were already somewhere up on the glacier, setting up to get some sick sunrise footage. Having expected us to come down this way the previous afternoon, they had been forced to sleep huddled together under a rock on Meany Crest when we bailed. If they were angry and frustrated, they did a good job hiding it. I had met them briefly in the dark before Rainier, and dismissed them as cool beautiful people, but they seem to have some fortitude. This project has been part fastest known time (FKT) and part adventure film, with the expected tension between the needs of these sometimes conflicting objectives. It was strange to observe, and probably even stranger to participate. 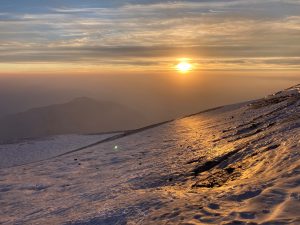 I hung around while Jason got mic’d up, then we continued to the glacier, where I stopped to put on crampons. The crew had put in a crampon track across the Fryingpan Glacier the previous day, so the route-finding was mostly mindless. There was one brief crevasse maze on bare ice, with treacherous light-white stripes plugging some holes, but it was not too complicated. The guys with the camera had timed it just about perfectly to get a sunrise shot of Jason crossing the glacier, though we had to wait while Baxter changed the camera battery. Shooting complete, the four of us continued to the notch between the Whitman and Fryingpan Glaciers. There was a bit of a use trail through the choss, then we were back down on snow and ice, which gradually steepened between Little Tahoma’s east and southeast ridges. The surface consisted of broad suncups, and the snow was fairly solid, making for easy travel as long as one did not slip. Toward the top, as the angle steepened, I decided that the rock to the left looked easier, so we put away our snow gear and continued there. 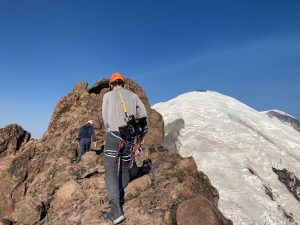 Little Tahoma looks like an absolute choss-pile from most directions, and the east ridge is in fact rubble held together by dirt, but the southeast ridge consists of some harder volcanic rock. As the two ridges joined, we hiked on some talus and dirt, then scrambled a bit of fun class 3 (or 4 if you looked for it) rock. The route description mentioned a tricky notch to the true summit, but it was no harder than class 3, though terribly exposed on the north side, which drops 2000 feet almost vertically to the Emmons Glacier. From the summit, which has a nice old Mazama register box, Luke and I watched the line of ants going up and down Rainier, admiring the broken-up glaciers with their crevasses laid bare. 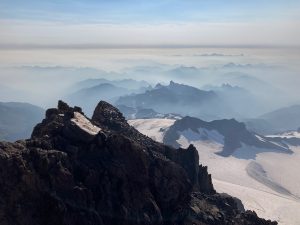 The smoke was much better than the day before, though still noticeable to the east and south, so I admired the views of layers of steep, forested mountains fading into the haze below while they shot summit footage. Afterward Jason and I took off, leaving the film guys to fend for themselves. We shortly regretted this, as one of them kicked off a toaster-sized rock that bounced straight down the route. There was nothing to do except make myself small and hope for the best, but fortunately the rock bounced over me and did not dislodge a shower of smaller missiles. The snow on the Whitman was still a bit hard for fast boot-skiing, but soft enough not to be too treacherous. The Fryingpan was easier travel, though a couple of the snow bridges on the crevasse maze were no longer usable.

I made awkward smalltalk with the other half of the film crew while they retrieved the mic, then we took off for the trail. Though no one else was climbing Little Tahoma, there were plenty of day-hikers and backpackers on the Wonderland Trail, and one guy who looked like he might be running the loop. Jason’s legs were predictably toast after 49 days and 98 peaks, but I was feeling good, so I took off at some semblance of a run toward the trailhead. I think I even managed an 8:30 mile, which pathetically counts as “fast” compared to most of what I have been doing. I chatted with Ashly until Jason got back, then they took off for Mount Adams while I made lunch and figured out what to do after my brief brush with fame.

Baxter on the Whitman

One response to “The Tahomas”