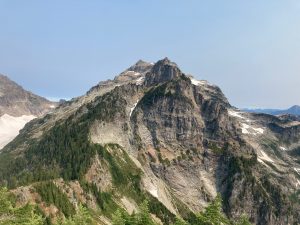 Kyes, Columbia, and Cadet are the three high peaks of the Monte Cristo region, connected to Monte Cristo itself by ridges chossy and serrated enough to be useless. I had found this out to my frustration when trying to tag Kyes from Monte Cristo recently, later learning that Kyes is a straightforward climb by the normal southern approach. Armed with this information, and finding myself along Highway 2 on the last good weather day for awhile, I decided to return for Kyes. I decided I preferred riding my bike to simply coating it with dust on the back of my car, so I also rode the last ten miles of Forest Service road from Skykomish, gaining a thousand feet both ways to cross a low pass between the Beckler and Skykomish Rivers. 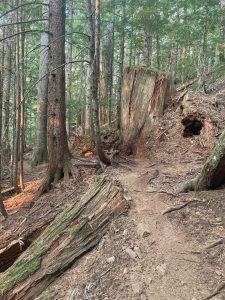 I started at dawn, turning on my blinking taillight to warn any cars speeding up the dirt road through the dim forest tunnel. It was early on a weekday, though, so I had a quiet ride, and while there were several groups camped at pullouts along the rivers, there were only two cars at the trailhead (yet another fee area). I locked my bike to the sign, then took off at a brisk hike up the moderate trail. The trailhead notes had warned that there were few water sources, and that they should all be treated, but I found a nice spring less than a half-mile from the trailhead, where I stopped to drink and top off my two liter reservoir. 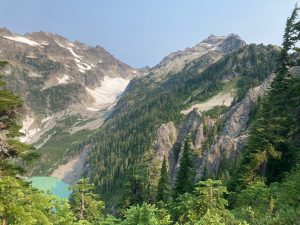 The trail steadily gained elevation in wooded switchbacks, passing old-growth stumps and eventually standing old-growth trees. Smoke from the California fires turned the morning light bright orange, but it was all well aloft, so I was breathing clean air. I passed a solo Asian man headed up to the lake, and two women just past their tent, but the area was pleasantly quiet. The trail enters more open ground on a ridge, then drops slightly to the disgusting puddle called Virgin Lake, where I left it.

A faint climbers’ trail follows the ridge north toward Kyes Peak, staying mostly on the crest. A rock step and some pinnacles in the woods are probably the route’s crux. I tried going left, found ground I did not like, then traversed right, eventually regaining the crest after quite a bit of steep side-hilling and hand-over-hand climbing up evergreens and huckleberries. The ridge eased above this, with mostly decent trail leading through a nice camping area to a junction.

The standard route to Kyes traverses left below East Blanca Lake Peak, but I stuck to a faint trail along the ridge. EBL was mostly a walk-up, with just a bit of scrambling crossing a couple of false summits. While not much of a peak, it does have a nice unobstructed view of Kyes. The track I had downloaded from Peakbagger returned south to the standard route, but I thought I saw a bit of a boot-pack continuing along the ridge, and it all looked navigable, so on I went. There were a few third class shenanigans this way, but nothing harder than the rock step lower down, and I was soon back on the standard route. 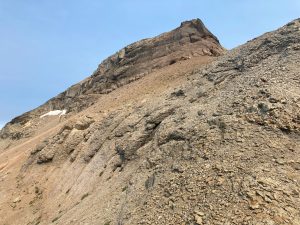 The climb from the saddle to open country southwest of Kyes was steep, alternately climbing open swaths of heather and bashing through evergreen scrub. The trail dissipated here, with multiple faint paths blending into game trails. Once in the open, I made an ascending traverse over boulders to reach some lingering snowfields, traversing under some chossy subpeaks on Kyes’ south ridge. The upper mountain is made of what looks like layered, welded tuff, which forms sticky slabs in one orientation and unclimbable choss in the others, and breaks to produce sketchy marbles. The route to the summit gains the ridge after the subpeaks, then stays either on the crest, where the rubble is flat enough to walk, or to its right, where the rock is clean-ish slabs. 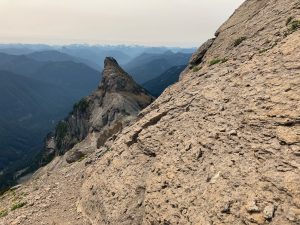 The day was uncomfortably hot, so I was pleased to note some snowmelt streams below the ridge for future use. Not having crampons or an axe, I stayed more on the rock than I would have otherwise, only crossing the lower-angle parts of the upper snowfield east of the ridge. The final scramble looked tricky as I approached, but proved easy on the way up. Looking north toward Monte Cristo, I was glad I had aborted my attempted traverse early. There are multiple breaks in the ridge, and the rock layers are angled wrong to climb Kyes from that side. I noted a few parties in the register climbing Kyes, Monte Cristo, and Columbia from the Columbia Glacier between them, but they did so in early season when snow would cover much of the awful rock. I am still curious how the one person I noted on my previous trip had “traversed” to Monte Cristo. I took in the views in all directions, noting the distinct high smoke layer to the north and west, lower smoke to the southeast nearly obscuring Stuart, and a small new fire (Moe Creek) to the east. 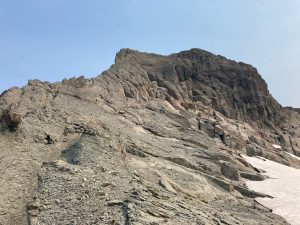 The summit slabs were much more intimidating on the way down, with the occasional friable edge or pocket of marbles feeling much more treacherous. I carefully downclimbed, then took more snow on the way down, carrying a sharp rock for self-arrest. I took the bypass around EBL Peak, finding some moderate thrashing and steep side-hilling with intermittent faint trail. Back on the ridge, I found a different, equally-bad way past the rock step, and was relieved to finally reach the trail and shake the pine needles out of my shirt.

The trail was surprisingly crowded mid-afternoon, with a remarkable number of people driving 20 miles from Highway 2 to hike to a large blue-green lake. I passed parties headed both directions, quickly topping off my water at the spring on the way. There were over a dozen cars at the trailhead when I returned to my bike, even a few with out-of-state plates. Fortunately there was not much traffic on the road out, so I had a quiet ride back over the pass and down to my car.

Columbia and Wilmans from Kyes