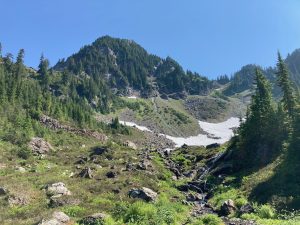 Illabot Peak and North Mountain are two peaks notable only for having more than 2000 feet of prominence, and for being near where I was. I had hoped to do the Twin Sisters southeast of Bellingham, supposedly one of the Cascades’ better scrambles and a fun bike-n-hike, but SR 9 was closed for some reason. Looking around for a last-minute substitute, I settled for these two. 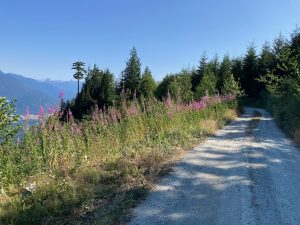 To make Illabot a bit more of a challenge, I decided to bike from the base of the Illabot Creek Road, only a few hundred feet above the sea. From there, the road gently climbs to nearly 4000 feet at its end, with the Illabot Peaks Road petering out in various spurs at a similar elevation. The ride is pleasant, being gradual, mostly well-graded, and shady in the morning. As I turned from the well-maintained Creek to the brushier Peak road, a work van paused behind me, then followed, passing me as I labored uphill. The man inside asked if I was headed for Illabot, shook his head at my extra approach, and offered me a ride, which I politely declined.

After a long climb that would have been painfully narrow and brushy in a car, I followed various spurs generally left to a saddle at 4100 feet, corresponding to the “NW approach” route description on Summitpost. I locked my bike to itself, then began hiking down a clipped path on an older logging road. The clippings showed that someone still cared about this road, but they seemed to peter out in about half a mile. I turned back, thinking I might have passed a climbers’ trail, to find the man from the van headed down the same road. He was looking for the same route I was, so combined forces to head back down the road.

Where the clippings seemed to cease, we interpreted some old downed trees as “the second logpile” and headed toward the peak. Reminiscent of Bob Burd, the man pulled on a pair of gardening gloves and proceeded to thrash through the pines and brush with remarkable speed. I was hard-pressed to keep up with him in my new Dick’s Sporting Goods shoes, which both loosened up around my feet and failed to provide much traction. As the slope steepened, we hauled ourselves from bush to tree, yarding on plants and leaning back to gain traction. After plenty of this and a bit of third class mossy rock, we reached the crest of the peak’s northwest ridge.

The route description mentioned a “sloping meadow,” and we found something vaguely like that after awhile, but we slowly realized that we were not on the correct route. The ridge was a classic Cascades horror, with chossy rock blobs on top, steep sides, and dense shrubs and krummholtz everywhere. I lost track of my companion, downclimbing a couple of rotten steps before giving up on the ridge. I eventually traversed right to a notch where I could downclimb left into the bowl north of the summit, from which a chute led to the saddle west of the summit where the two posted routes supposedly meet. I might have found a faint path, but it was really just more, easier thrashing to the summit.

After the hardest 2 miles and 2000 feet I had suffered in a long time, I was thirsty and unhappy with how my day was going. I looked around at the views a bit, then descended the north side a short ways to a snowpatch, where I lay down to drink a liter of water and eat the rest of my Chex mix. Somewhat cheered, I continued northeast, then cut back with only a short section of grievous brush to descend to the north drainage.

This, clearly, was the correct route. I found a couple of meadows/bogs along the way, connected by stretches of relatively open woods. Only in the last half-mile leading back to the old logging spur did I encounter more hideous brush, with chest-high thorny berry plants growing out of uneven snags and rocks. I thrashed and cursed my way back to where the road was shown on my map, and found it to be the expected “anti-road,” a swath of dense alders. Dodging through these, I eventually found an old fire ring and evidence of clipping, which increased until I reached the spot where we had deviated from this wonderful route. At least the ride back down was fun.

The next morning I rode up North Mountain, just outside Darrington. The old lookout is still intact, and has good views across the Skagit, Sauk, and Stillagaumish Valleys, though it is unfortunately locked. The true summit lies a half-mile to the north, and used to be difficult to reach. Fortunately the town has installed a network of bro-friendly mountain bike trails with artificial jumps and such, and one of those passes within a few feet. I hiked it to tag the summit, then road back down the lookout road, being passed and dusted by the bros’ trucks as they shuttled their full-suspension downhill bikes to the top. I felt that I had exhausted my options for fun in this area.

This entry was posted in Biking, Washington. Bookmark the permalink.