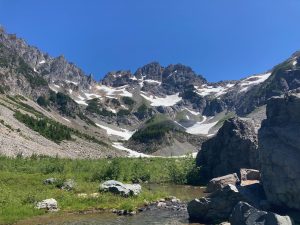 Monte Cristo was a mining boom-town active between 1889 and 1907, linked to Everett on the coast by a railroad during its brief life. Monte Cristo is also a mountain behind the town, a lesser summit between the higher Kyes and Columbia Peaks, with the Pride and Columbia Glaciers to its southeast and southwest. Not having any information on any of these peaks, I ended up stumbling upon the surprisingly hard (5.6) standard route on Monte Cristo, and discovering that the peak is some of the worst Eiger-level choss I have climbed this season, with most of its summit consisting of outward-sloping blobs covered in gravel. Dreams of linking it to Columbia and/or Kyes were beaten out of me by what felt like hours of sketching around looking for a feasible route. 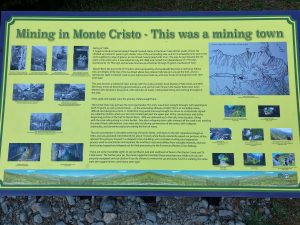 I camped a short distance from Barlow Pass, then returned to the old rail-bed, this time by bike. The first part flew by, but I was forced to hike-a-bike as the route turned into a twisting, rooty trail where the line had been washed out. I was beginning to regret bringing the bike, and almost left it where the route crosses the Sauk on a big log, but the old rail-bed resumes on the other side, and is mostly rideable to the town site, where I found a bike rack with a half-dozen other bikes already locked to it. I spent some time reading the interpretive signs and looking at the locked buildings, then began hiking up the Glacier Basin trail. 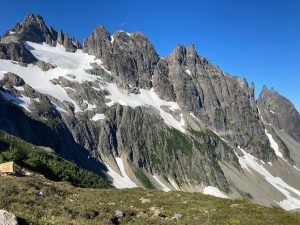 Despite all the bikes, I saw only three other people on the trail, one still asleep under a tarp, and a couple returning from a mountaineering trip. I was tempted to ask them about the route up Monte Cristo, but did not want to reveal myself to be the unprepared idiot I was. Monte Cristo looked like a mess from the valley, with no obvious route on this side. However, I saw clear paths to the saddles on either side, and chose the left because it looked less snowy and therefore slightly easier without crampons — I had foolishly only brought an axe. The route worked as well as one could expect, and I was soon separated from the saddle only by a short dirt-chute.

Here began the theme of the day. The dirt-chute was crumbly garbage and outward-sloping dirty ledges, which I ascended carefully on all fours. I had hoped to find gentle heather, or a glacier, or something else nice on the other side, but instead found more steep choss leading to snowfields below. I started up the left side of the ridge, then thought better of it as things got worse. I retreated nearly to the notch and headed right, finding some goat tracks and eventually, after some sketchy traversing on outward-sloping dirt and gravel, returning to another notch closer to the summit. 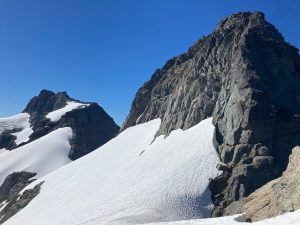 Here I was finally greeted by something pleasant: a moderate-angle snowfield leading up around the summit to the left. The ridge itself did not look promising, so I began traversing across the snowfield, hoping to find an easier slope or ridge around the peak’s southeast side. Midway across, I spotted two parallel chimneys that seemed to offer a route to the peak’s upper slopes. Looking closer, I saw some rappel tat; perhaps this was the way. The chimneys were stiffer than they looked, with some awkward jamming and big moves to get over a few bulges. They were also practically sport-bolted, with a half-dozen or more shiny new bolts showing the way, some with cheater slings attached. Puzzled and reassured-yet-not, I followed the line, a part of me hoping that the other side was easier. 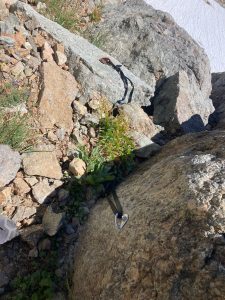 Above the chimneys, I followed a good, solid ramp, then scrambled up grass and moderate gravel-blobs to the summit. The damp register did not show much traffic, but did include one guy soloing the “north ridge” (was that what I did?), one party coming up the southwest, and one “traversing” from Kyes. I let the fact that there were other routes off the peak cheer me up for a bit while the register dried, then signed it and headed out down the ridge toward Kyes. After a couple of boulder problems, this ended soon and badly at a steep slope of moss-and-choss above a vertical step in the ridge. I circled around the peak’s east side looking for an unlikely descent, then gave up and returned to the summit. So much for the “traverse.” 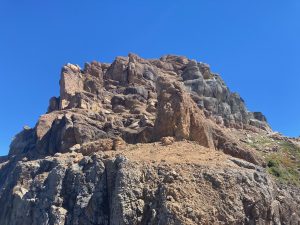 Next up, I started down the southwest ridge, encouraged by both the register entry and a mountain goat perched on a knoll below. I had seen goat tracks around the summit, so I knew they had some route. Unfortunately the southwest ridge is all made of the summit’s horrible gravelly crap, which makes even easy-looking terrain feel perilous. I eventually reached a rappel anchor and a cairn beneath it, but I was still short of where I had seen the goat, and the remaining terrain looked worse. Not quite ready to give up, I traversed back along the southwest face, and was pleased to find myself at the bottom of the step that had stopped me on the south ridge. 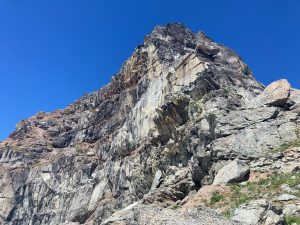 Unfortunately my torment would continue. I traversed right around another tower, descended some moss-and-choss, then did some low-fifth-class downclimbing in a crack to within 20 feet of easy ground. So… close! Unfortunately my little crack system ended in an overhang without any positive holds, just a bit too high to jump. I traversed a flake to the left onto cleaner granite, but did not have the courage to downclimb a sharp, steep hand-crack with a few flakes to either side. I thought for a minute, then retraced my route to the notch, hoping to descend the gully on its east side. Unfortunately this turned out to be steep dirt below, and guarded by a chockstone above. 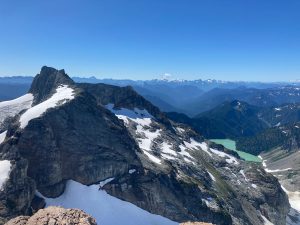 Feeling increasingly frustrated, I almost returned over the summit to the known route, but decided instead to give the hand crack another look. On this second attempt, I trusted the flakes to lean back and smear my feet in worn-out trail runners, got a foot jam or two, and worked my way down the crack to where I could traverse back over and down to flatter ground below. This route felt no easier than the way I had ascended, but at least it left me a couple hundred yards closer to Kyes. I crossed the snow saddle between the Pride and Columbia Glaciers, then headed south on alternating rock and snow. I was mentally worn down, but the peak was close and looked straightforward.

Sadly, easy success would not be mine. The ridge turned to horrible choss again, and was cut by a deep cleft with vertical sides. It looked like I might be able to descend the east side a few hundred feet and traverse, then climb a step snow-tongue, but I could not see the whole route. At this point I had had enough of disappointment, backtracking, failure, and sketchiness. It was time to cut my losses and head home via a known route. I returned to the saddle, then traversed the snowfields east of the ridge to the first chossy notch. The snow below was nice and soft by now, so after a final bit of chossineering, I had a pleasant boot-ski to the valley and the trail. I saw no one in Glacier Basin, but perhaps a dozen tourists near and around the ghost town. I unlocked my bike, then bombed past a half-dozen poor souls walking the road on my mostly-downhill way to the trailhead. I still had food to stay longer, but I had seen enough of this part of the range.

Cadet and Sloan from Monte Cristo