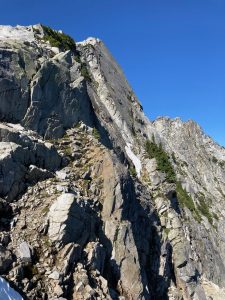 Vesper Peak is an unremarkable summit off the Mountain Loop Highway with a remarkable granite north face containing several five- to six-pitch moderate climbing routes, which had been on my radar for awhile. I met Ben climbing in City of Rocks, and when he contacted me looking to do some climbing in the western Cascades, I immediately thought of Vesper. I don’t get to rope up very often, but I still more or less remember how to do it safely, and it helps my scrambling. Since the approach is long (3500 feet) for relatively short climbs (500 feet or less), we did two routes, climbing True Grit, then looping around the convenient walk-off to climb the more popular Ragged Edge. We climbed on a weekday, so the crowds were manageable, but there were still at least three other parties on Ragged Edge, including one guided. The parking lot was jammed with pricey “#vanlife” vans on Friday night, though, suggesting that this area is too close to Seattle to be pleasant on a weekend. 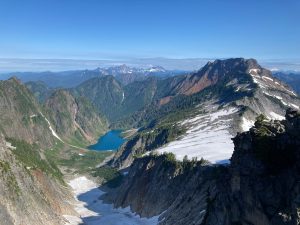 We got a semi-lazy start from the parking lot around 7:00, each carrying too much stuff: I was lugging Ben’s 70m rope, while he carried an extensive rack with two sets of nuts and cams up to #3 including many small ones. We passed two teams headed in the same direction, and saw one tent at the lake near the head of Vesper Creek. Looking at Vesper from the approach, it seemed like we were hiking too high, and would run out of peak. However we were in fact on-route, and once we reached the saddle with Wolf Peak it became clear why Vesper is so popular: its upper north face is a smooth, triangular granite slab tilted at about 60 degrees. The ledge traverse to reach the base of the climbs can be dicey with snow, but it was mostly clear and easy. 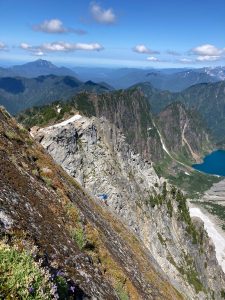 Reaching Ragged Edge’s original start, we quickly racked up and got climbing so as not to delay the party behind us. As it turned out, we need not have worried, since they were doing the adventurous alternative start, and since we quickly got off-route and climbed True Grit. Ragged Edge jogs drastically right in the first or second pitch, so this is an easy mistake to make. True Grit is a more direct line, with generally better rock and more interesting climbing. Ben linked the third and fourth pitches, a slab and a long finger crack, using the full 70 meters of rope. I was glad he led this one, as the finger crack would have been intimidating on lead, especially now that the rubber has worn off the toes of my ancient climbing shoes. I finished the final vegetable scramble to the summit, where we chatted with a guide as he brought his client up the final hero pitch of Ragged Edge. 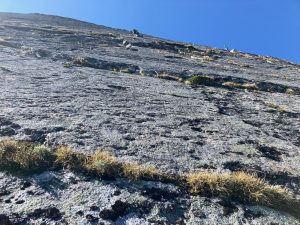 We followed a bit of a trail east, then slid and kicked steps down snow to reach the saddle again. There were already two parties headed for Ragged Edge, but we were moving fast, and they very politely allowed us to go first. Rather than starting in the same place, we did the alternate start, which requires a bit of fourth class downclimbing to reach the base of a lieback flake. I took the first pitch, making the lieback look harder than I should have, then wandered up the class 3-4 slabs and gullies above, looking for the “faint white dyke [sic]” mentioned on Mountain Project. Not seeing any such feature, or many good gear placements, I wandered up and slightly right until I found some clean cracks below a step to build an anchor. 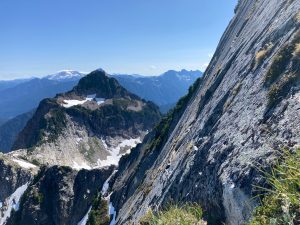 Ben followed up, then traversed right to spot some bolts leading to a bolted anchor, then belayed me across to get back on-route via a short and unremarkable pitch. I led the next, which traverses some moderate ledges before climbing the arete past a couple of old pitons. The initial ledges were a bit intimidating, as the only crack that looked like it might take protection was behind a giant loose breadloaf. I was much happier after reaching the first bolt and piton, and continued up to another gear belay on a grassy ledge. 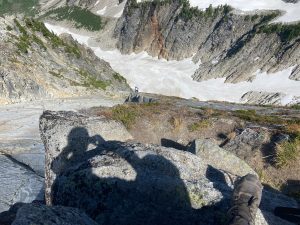 Ben once again linked the two crux pitches, which head out to and climb along the edge of the face, giving the route its name. The climbing is sometimes face-y, and the exposure feels very real for both the leader and follower, as a fall could leave one swinging over the edge. I took the final pitch, along the easier upper portion of the edge to the summit. The climbing was not very hard, so I got lazy with my gear placements, slinging a horn and placing a cam in a too-big crack. While Ragged Edge ascends a cool feature, we both agreed that True Grit was a better climb.

After hanging out on the summit for awhile, we descended to the lake, passing a couple guides setting up camp. They suggested that we do Mile High Club, a 7-pitch 5.10a on a formation we would pass on the way down. Ben seemed tempted, but we had climbed 9 pitches already, and I did not feel that my skills were up to sustained climbing at that grade. So we just hiked back to the cars, and he headed back to Index while I had dinner and settled in for another night at the trailhead. The weekenders were descending in force, so I was glad to leave first thing in the morning to scramble somewhere less popular.

This entry was posted in Climbing, Washington. Bookmark the permalink.