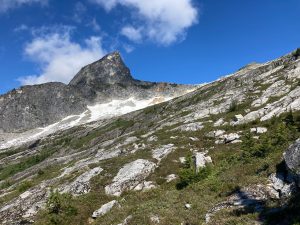 It had been awhile since I had visited the Pickets, and I had only briefly visited the Crescent Creek basin briefly in 2014 to tag Terror via its standard route. That time, I had ascended and descended the relatively popular Terror Basin route, crossing back and forth across the Barrier after tagging several peaks in that basin. This time I decided to investigate the less-used Crescent Creek approach, which crosses the bottom of the Barrier near the Chopping Block. Crescent Creek is bordered by some of the harder, more obscure, and less-climbed Pickets summits such as the Rake, Ottohorn, and Twin Needles. All but East Twin Needle supposedly have class 3-5.easy routes on their south sides, though they seem to be done more often either via harder routes or as part of a traverse. However, I ended up shut down and demoralized after attempting West Twin Needle, and further beaten down by annoying travel over the Barrier and across the Terror Glacier to the standard route. Fortunately I had summited the Chopping Block and chance-met an online acquaintance along the way, so the day was not a total waste.

I suppose I could and should have started by headlamp, but the days are still long, so I got a relatively leisurely start along the old Goodell Creek logging road. The parking lot was full, and the trail well-beaten-in, so I expected to find a small tent city at the usual camping spot for West MacMillan Spire. Where the Terror Basin approach turns sharply uphill, I continued straight onto unfamiliar ground, finding a decent climbers’ trail that soon left Goodell Creek and any former road behind to climb through the woods south of Terror Creek. The trail started out fairly easy to follow, but soon split and disintegrated. I lost it for awhile, weaving through small cliff-bands, balancing on logs, dodging devil’s club, and retracing my steps for awhile before finding some bits of flagging and trail near where it crosses the creek.

There were some logs as described online, and an obvious cairn on the other side, but none of the logs formed a bridge. I stupidly wasted some time trying to build a bridge over a constriction, only to have my inadequate logs washed away; then I walked fifty yards upstream to a flat, gentle part and waded across, finding it no more than calf-deep and smooth enough to be comfortable barefoot. Putting my shoes back on on the other side, I walked back downstream and picked up the “trail again.” 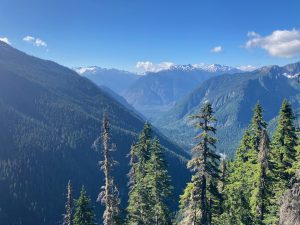 This part of the route is the most insanely-steep approach trail I have followed in the Cascades, climbing more or less straight up the side of the steep ridge between Terror and Crescent Creeks. Others have told nightmare stories of rappeling through woods to pass cliff bands while descending this route, but I found the trail relatively easy to follow in all but one or two places. It was certainly an efficient way to gain elevation, and almost pleasant with a daypack. Once on top of the ridge, the trail becomes fainter and more annoying. The crest is infested with blueberry bushes, and the trail fades in and out of existence. I was soon tired of thrashing through brush, bashing my shins and seeming to make little progress. I was also thirsty, as there was limited shade on the crest, and no water. 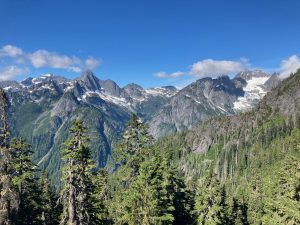 After a marked increase in annoyance, I finally emerged on the slanted, triangular plateau forming the Barrier’s base. Travel was suddenly easier, and water plentiful. I sat on a slab to drink a liter, then filled up my bladder and continued toward the Chopping Block. My main goals were farther north, but I had a chance to return to them later this summer, and I did not want to repeat this approach. Nor did I want to return the way I had come, preferring instead to cross the Barrier and join the well-used MacMillan Spire approach. 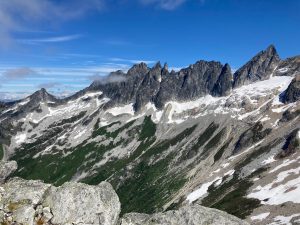 I did not know anything about how to climb the Chopping Block, but it looked fairly easy on the south side, with access gullies on this side and a heather ledge leading back to the north and, presumably, the Barrier crossing. Approaching the base, I was surprised to hear shouts from above and see a climber rappeling the north ridge. I continued toward my chosen gully, which was loose but not particularly hard, and soon reached the near side of the sloping south face. Following the obvious line, I soon found some typical Cascades rap tat, reassuring me that I was on some version of a route. There were a couple of short, exposed sections that might have been low fifth class, but a line staying near the east side of the peak led to the summit plateau without too much difficulty. 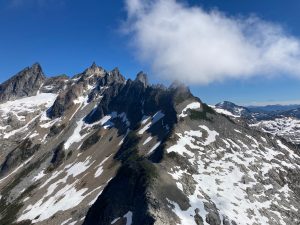 I found a wet register in a cylinder on top, which the other party had not signed, carefully added my name, then set it out to dry a bit while having a snack. One reason to climb the Chopping Block is for the view, with a perfect panorama of the Southern Pickets from West Peak to Terror. They looked intimidating, and the bowl below them looked like a grim talus slog. I cleaned up the anchor garbage on top, then retraced my route to the heather traverse, which worked as well as I imagined.

While on top, I had seen a climber returning to a camp on the ridge. Unsure whether I wanted to subject myself to the talus-filled Crescent Creek cirque, I headed where the climber had gone, figuring that it would only be a minor detour if I decided to bail back to Terror Cirque, and that they might also have camped near the correct entry point to Crescent. I emerged on the ridge to find two climbers packing up camp, almost ready to hike down the way I had come. After speaking for a minute, one asked me my name, and when I told him, he revealed that he (Jon) had been emailing me recently about Picket beta. The world of people interested in rugged, remote Cascades peaks is small indeed. Talking to Jon and Alex for a half-hour restored my motivation, and I set off down the scree toward the Twin Needles with new determination.

The bowl was not as bad as it looked: the talus was fairly stable, and there were slabs and snowfields mixed in. Other than a couple of steep old moraines, I found no major obstacles in reaching the base of the ridge near the Needles. Beckey says that all of these peaks were first climbed long ago and, with the exception of East Twin Needle, are no harder than low fifth class from the cirque. He does not, however, describe any of the routes in any useful detail, and I quickly found that while there may be moderate routes — it certainly looks like there should be — most of the terrain is chossy, outward-sloping, or otherwise difficult or unpleasant. 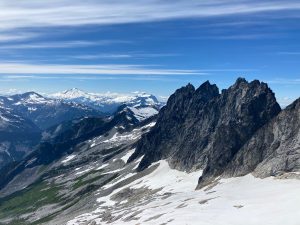 I tried several approaches to the West Twin Needle. First I tried a gully, which ended in a mess of chockstones and gained me nothing but some skin torn off my fingers by a slip getting into the moat. I got around the first chockstone to the right with some careful face climbing, but was confronted by more chockstones, and a not-quite-accessible ramp to the left. I tried another line left of the gully only to give up as the meandering ramps seemed to lead to steeper terrain. Slightly bloody and thoroughly unhappy, I tried going right around the corner, only to find steep turf and choss leading away from the Twin Needles and toward the Rake. Far from home and sick of this pointless activity, I retraced my route to the snow and climbed over to the upper Barrier crossing.

This crossing has a reputation for being tricky, but I do not remember it giving me much trouble back in 2014. However either it had gotten harder, or I was in a less buoyant mood from having been defeated at my main goals. I found sketchy downclimbing, packed dirt, and a slightly dubious moat crossing. My frustration continued on the glacier, where I found that my line staying close to the ridge toward West MacMillan Spire was probably too crevassed to safely cross. I instead made a long detour down and right to reach the glacier’s toe. The traverse toward camp and the trail home held its own irritations, with steep slabs left behind by the retreating glacier, often lubricated by melt streams from what remained. 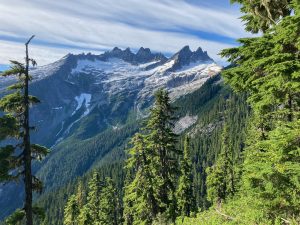 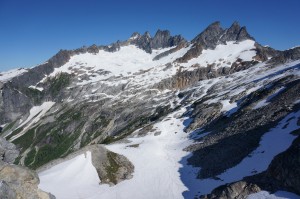 Finally reaching the normal camp, I was surprised not to find any tents. Even the boot-prints in the snow looked old, as if everyone had left that morning. This made no sense to me, it being a weekend. Fortunately the path, once I found it, was easy to follow, and after a long alpine traverse, I enjoyed bombing nearly straight down to the road. I even played the same album I had in 2014 by the Klezmatics — Jewish wedding dance music goes well with the quick reactions and careful footwork required on such a descent. Once back at the road, I jogged and quick-hiked to beat boredom and darkness, but stopped to harvest thimbleberries when they were close to the trail. Most of the cars were gone by the time I reached the lot, so I set my shoes out on the hood and settled in for another night.

Triumph and Despair from Chopping Block