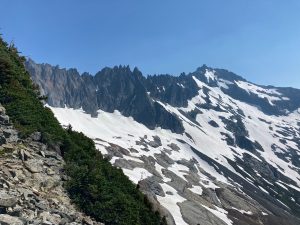 Horseshoe Peak is one of many lesser summits on the long, serrated, chossy ridge between Boston and Buckner. While it makes the Bulger List of Washington’s highest 100 peaks, it does not have enough prominence to count as one of the 100 highest “true” peaks. Its prominence, i.e. height from the highest saddle with a higher peak, is only listed as 80 feet, but looking from its summit, the ridges toward both Boston and Buckner seem to drop more than that, making it at least feel like a real peak. I had ignored it on my previous trip to Boston and Buckner, giving me something else to do while the Cascade Pass road was closed. 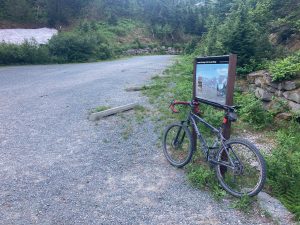 A joy to behold

I biked up to the trailhead in an hour or so, and luxuriated in the absence of cars and tourists. There were a couple tents nearby, but mine was the only bike. Less than a quarter of a mile up the trail, I surprised a black bear also enjoying the quiet, and after we both took a moment to assess the situation, I backed off to give him a chance to get off the trail. Continuing up toward the pass, I was reminded of how I loathe this trail: it is just steep enough to be annoying to run uphill, but graded at an average of 10%, i.e. less than an ADA wheelchair ramp. 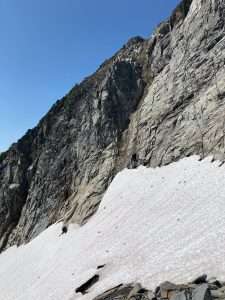 From the pass, I continued on the trail up Sahale Arm, passing a couple of guys hoping to climb Sahale. I remembered coming back to Sahale Camp from Buckner, but did not know much about the route. I headed right, descended a snowfield, and reached the cliffy edge of the Sahale Arm without finding a use trail or cairns. After wasting some time looking at my options, I finally sketched my way down the “brown streak,” an intrusion of brown choss in the granite. This was probably only fourth class, but it took me quite awhile, reminding me that I am out of practice at the alpine shenanigans at which I normally excel. From there, I made a long snow traverse across the basin around 6800 feet, eventually reaching an old mine which seems unlikely to have been profitable. 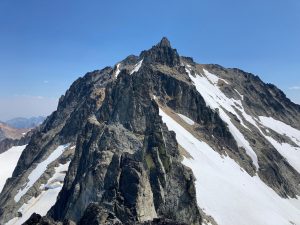 I diagonaled up the snow toward Horseshoe’s base, then transitioned to chossy rock before the final snowfield south of the summit. Along the way I had been battling large biting flies, which flew faster than I could climb or descend snow, and refused to lose interest. The only good thing about them was the satisfying thwack resulting from a direct hit. After some needless hard scrambling, I reached the saddle between the peak’s two summits. I climbed the right one first, only to look over and see a massive nest of tat on the other. Bummer! I returned to the saddle, then made my way up a ramp to its end, where a final, steep pull-up/mantle got me to the summit. 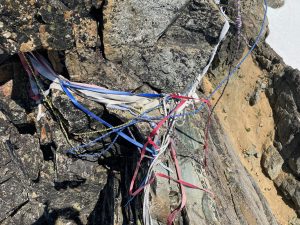 Lounging around, I examined the ridges to both sides, with their many large pinnacles. The ones leading back to Boston looked painfully loose, while the next major one toward Buckner, I believe nicknamed “Lick of Flame,” looked like a worthy summit with no easy routes. Satisfied with my day, I retraced my route across the basin and up the brown streak, refilled my water and ate my last bar, then joined the trail once again at Sahale Camp. I met a half-dozen people headed up the ridge, most intending to camp and probably climb Sahale. I also passed the two guys I had met in the morning, who had turned back because of (supposed) altitude sickness. I ran the switchbacks down Cascade Pass out of sheer frustration and boredom, then had a final, wonderfully cooling ride down the road to my car.

A joy to behold