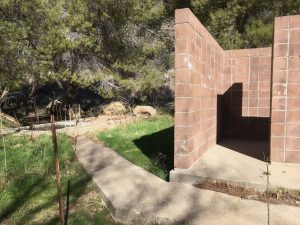 The midnight pee is a dreaded part of camping — unless there’s a tub of steaming hot water 20 steps from camp. We soaked under the glittering stars before returning to the relative shelter of our concrete bunker, clean, damp, and toasty warm for the second part of the night. I enjoyed breakfast and tea while soaking and we were ready to depart at the crack of 10 AM for a short ride and a day hike. 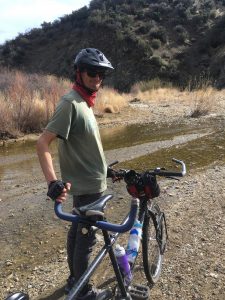 Riding unencumbered by panniers and trailer felt breezy and blissful; the first three miles of downhill cruising sped by. River crossings were more relaxed and pleasant, and without gear and weight demanding attention we were able to focus on the delight of riding through this improbable wild beauty, less than 150 miles from almost 5 million people.

At the Middle Santa Ynez campground a few miles from the hot springs we were surprised to see half a dozen shiny cars and a dozen folks gathered around picnic tables. Over the past three days we’d seen maybe a dozen people, all either backpacking or biking, and had forgotten folks got around by turning a key and pressing a gas pedal.

The gathered crowd were volunteers and staff from Channel Islands Restoration, a crew dedicated to removing invasive plants and replanting natives; they had permission from Los Padres National Forest to drive in and remove tamarisk. Tamarisk is a feathery plant with pink blooms that hosts dragonflies, hummingbirds and bees. The plant is also called salt-cedar and was brought over from Europe, with federal approval, for erosion control during the 1800s. It has quickly taken over riverbanks throughout the west and is considered an invasive plant by the US Department of Agriculture; ranchers and environmentalists alike despise the water-sucking plant which can transform desert streams and ponds into dry basins.

Removing the plant requires dedication; you can’t burn it, and many herbicides are ineffective against this plant which can go dormant for long periods before re-sprouting. Back-breaking labor is required, and if natives aren’t replanted and tended, a newly cleared river bank may erode severely in the next gully washer. I wrote an article about Channel Islands Restoration and their work a few years ago. After a quick chat, we kept biking towards the day hike Steve had suggested, up Indian Creek. 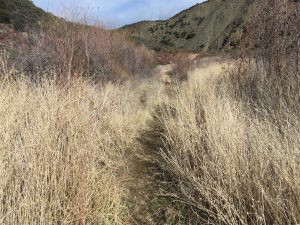 The route brought us to the top of a small pass and dropped down a steep hill passing more abandoned infrastructure; an interpretive sign about the diversity and fragility of the Santa Ynez River, more signs for Cold Spring, and Mono campground. About seven miles from the hot springs the road disappeared in a thicket of waist high invasive thistles. Their spiky seed-heads clung to our pants and socks as we heaved and shoved to push the bike through the tangle and across stony river beds. 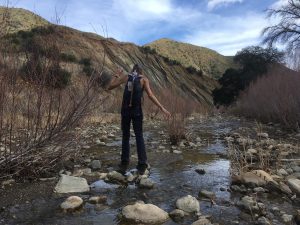 Once we cleared the snarl where a road or trail had once been we were relieved to find the surface of a narrow dirt road and the trailhead to Indian Creek just beyond. A rusted metal post held a trail register which revealed that only two groups had visited the trail in the past year. A crew of trail volunteers had cleared a path 3.5 miles up the creek, and a couple from a month earlier had pushed on further. “Trail overgrown with poison oak, no water. Misery.” read their entry in the trail register. We opted for a 7-mile out-and-back instead of the 11-mile loop we’d originally planned for. 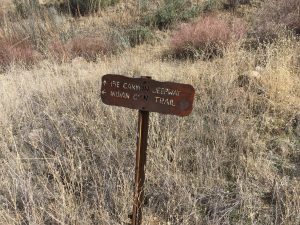 The trail followed flowing water, so we enjoyed birdsong and the musical trickle of Indian Creek as we contemplated the barren hillsides, distant ridges and streaky blue clouds. Walking exercised forgotten muscles after days in the saddle and we reveled in the freedom of being upright on our own two feet. The trail dipped down to creek crossings and vanished into head-high brush; generous flagging kept us on track. Back at the trailhead we combed through the trail register. Only a dozen groups had visited in the past five years, and their entries revealed a pattern of fire and flood that made the trail seem heroic. 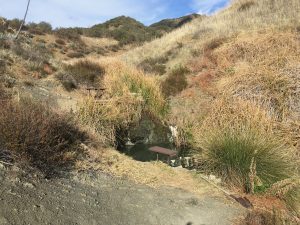 On the return trip we stopped at Little Caliente Hot Springs, two picturesque pools on a dry hillside that reeked of sulphur. The climb back up to the pass was casual on an unloaded bike and the Middle Santa Ynez campground was empty. We passed three cyclists on e-bikes on our return to Big Calilente, and settled in to read books and enjoy a final night at our own private wilderness hot springs.