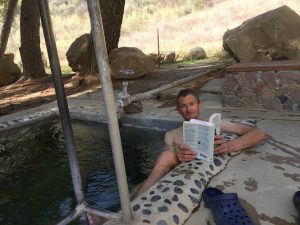 My peak-bagging had put us behind Steve’s itinerary, leaving us a mostly downhill half-day from Big Caliente hot springs, or a full day from various other possible camps. The hot springs were a side trip of several miles out of our intended loop, but supposedly worth the visit, offering a better experience than neighboring Little Caliente. We decided to at least try the springs, then choose whether or not to continue depending on quality and crowding. 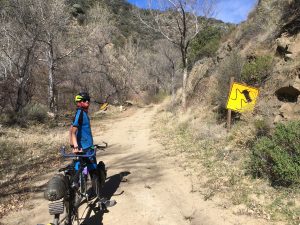 The unfriendly couple were only slightly better in the morning, perhaps still resenting having to share their “private” campground. This complicated our start, as my tissue paper Thermarest had predictably sprung a leak; such is the way of “ultralight” gear. Once the picnic/operating table was available, we set about trying to repair it, following the manual in the repair kit. The preferred way to fix a long tear is to heat an adhesive packet, then quickly spread it around the hole and apply a nylon patch. This supposedly both works in the field and lasts, but the glue would not liquefy after several minutes in boiling water just above sea level. We eventually slapped on an inferior self-adhesive patch, saw that it apparently held, and got on with our day. 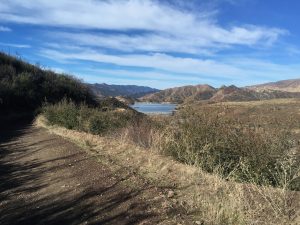 We continued down the Santa Ynez River, passing Jameson Lake, the highest of three reservoirs supplying drinking water to Santa Barbara. At the small caretaker house below the dam, the road finally became passable to normal vehicles again, and we made good time to the Pendola Guard Station. This was our most pleasant riding in awhile, descending gentle grades through a sparse oak forest along a broadening river valley. The Station was closed, but in good repair, with intact informational signs outside informing us that, among other things, the area is home to some of California’s condors. These giant vultures became extinct in the wild in 1987, and were subsequently bred in captivity and reintroduced to the wild in 1991; I am old enough to remember hearing about both events on the evening news.

This being a holiday weekend and an accessible backcountry hot spring, we met a number of parties headed in both directions. These included two parties of light bike-packers going in and one coming out, more than I have probably seen in the rest of my travels in the United States. The modern way to camp on a mountain bike is to eschew panniers and load up the frame, bars, forks, and whatever else with small bags of ultralight gear. This allows for probably three days of food without wearing a backpack, and with a decent-handling bike, at the cost of only a few thousand dollars. Though I find it slightly tempting, I do not enjoy singletrack enough to invest beyond my cheap and capacious trailer. 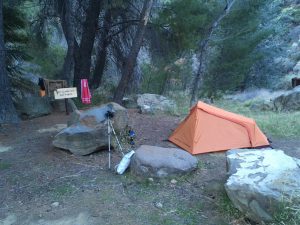 We were concerned that the springs would be crowded, but we met two parties leaving, one consisting of ten or so young women and a bored-looking guy. Arriving at the most-developed pool, we saw the expected “no camping” signs, but hoped that we would have the place to ourselves, and could camp unmolested. It was only slightly after midday, but with hot water in the main pool and drinkable water in the creek nearby, we would probably not find a better place to camp. Not traveling ultralight, we had brought a couple of books apiece, and spent much of the afternoon reading and unconsciously dehydrating in the hot pool.

It turned out to be less than ideal, but still good enough to spend two nights without regretting it. With one more day of holiday weekend remaining, we shared the pool with a couple of other groups in the afternoon, and two more overnight. Fortunately everyone was more or less considerate in maintaining social distancing and not being too loud overnight. Unfortunately, though, the wind picked up in the evening as it had every night, and blew in unpredictable gusts all night. While the others hunkered in their tents, we set up camp in one of the nearby concrete bunkers or changing rooms. This had the advantage of being a large, flat space, but it channeled the wind more than blocking it. That, plus what turned out to be a failed patch job on my TissueRest, made for a long and sleepless night.