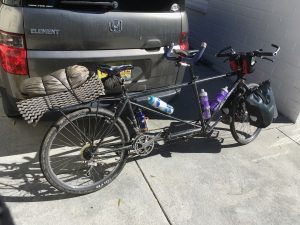 Extending 200 miles from Santa Barbara to San Diego, the south coast sliver of California hosts half the state’s population, and the regulations necessary to keep them in line. Leonie is allergic to instagram influencers, and Sean has already climbed the choicest peaks, so this is a dead zone for two climbing-biking-back-country dirtbags.

But a free platform for the back of Sean’s Element and an old friend beckoned in Pasadena. Driving 700 miles without cease held no appeal, so we cast about for entertainment in these densely populated environs. A casual inquiry with Leonie’s friend Steve, who lives in the hills behind Santa Barbara, produced a detailed itinerary for a 6-day mountain-biking adventure in the southern end of Los Padres National Forest. So we strapped the tandem to the roof, packed up a week’s worth of food and aimed the trusty Element south. [Thirty minutes later, we returned north, attached the bike trailer to the roof, and aimed south again. — ed.]

Our first stop was the backyard of NASA’s Jet Propulsion Laboratories. In the 1930s, pioneering experiments in rocket propulsion at Caltech proved hazardous, so a professor and gang of grad students moved their work to a dry wash north of Pasadena. Their trials led to the establishment of a federally funded research lab that claims to be “humanity’s leading center for exploring where humans cannot yet reach.” We were more interested in exploring the adjacent forest land, which offered a sweaty climb to a spectacularly smog-ridden vista and a delightful descent crossing several streams.

After a lovely hike, platform installation, and backyard tea, we braved SoCal’s freeways headed north. Steve had recently acquired a home in Carpinteria, a sort-of suburb just south or east of Santa Barbara, and offered to let us leave the car there during our tour. We slept soundly in the driveway, and passed a community arts center, a used bookstore, and a public swimming pool on our way to a Mexican bakery with cheap and filling breakfast burritos — the last vestiges of adorable uncrowded SoCal beach village. The median home price is an astronomical $825,000 — only 15% higher than the state average. Buy now if you can.

Steve provided a detailed topo map and handwritten directions for his personalized Sea to Summit tour. These featured an overview as well as detailed day-by-day instructions, including mileage, elevation and water sources. It felt kind of like climbing with a permanent top rope. 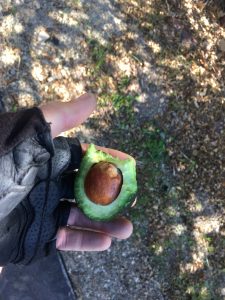 We set off on a smooth, buttery swath of pavement leading over a pass, winding around Lake Casitas and past lemon and avocado orchards. A sign warned us that “Stealing Avocados is a Crime,” so we harvested some windfall from outside the fence. It turns out that eating an unripe avocado is like chewing on a yoga mat.

A sharp turn up a steep hill on Matilija Canyon road forced us to a grinding halt and we pushed the tandem until the grade relaxed. We pedaled past barbed wire and aggressive private property signs until we reached a gate excluding motorized traffic and welcoming us to Los Padres National Forest. 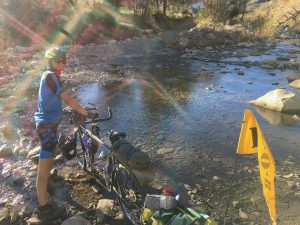 Reaching into five counties, Los Padres National Forest covers 1.75 million acres, an area over twice as large as Rhode Island. It stretches 220 miles from north to south, from Monterey to Ventura, and includes stately oak woodlands, hot springs and peaks over 7000 feet tall. Mountain lions and black bears roam hillsides tangled with chaparral. Almost all dirt roads are closed to cars, creating a haven for cyclists and hikers. 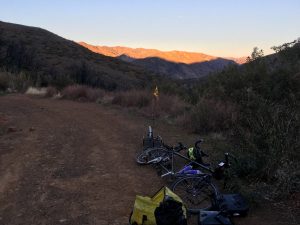 But the original road builders were sadists. Our route to the evening’s camp featured steep grades and over 3000 feet of climbing. We grunted and groaned and managed to keep our feet on the pedals as we advanced at a brisk walking pace up the abandoned fire road. Just as our water anxiety reached a crescendo we heard the welcome trickle of water. Sean engaged in vegetable combat to reach a small flow overgrown with lush foliage while Leonie set up a cozy nest at a mild angle on the side of the road. Evening chores and dinner were completed rapidly and we dropped to sleep exhausted and happy.

Stay away from my avocados!