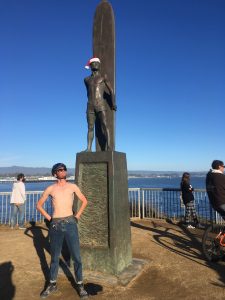 The closest I get to surfing

Though I spent years on the California coast before Dr. Dirtbag, I never ventured north of Malibu or south of San Jose. That has changed this winter with my spending significant time in the Santa Cruz area. While I have not been peak-bagging, I spent plenty of time outdoors as I normally do in the winter, engaged in shorter local fitness activities. Santa Cruz is about the same size as Santa Fe and, because it is bounded by the ocean and mountains, anywhere in the city is close to the periphery. The local mountains are low and undramatic, but surprisingly good for staying fit, with 2000 or so feet of relief from the ocean.

The climate, while far from tropical, is strongly moderated by the Pacific Ocean, making it possible to get out year-round. It is damp, though, making temperatures feel much colder than they do in the desert. I run in tights and mitts in the low 40s here, while I would normally wear shorts and thin gloves. Cycling is particularly hard on my hands, and I find myself wearing something more like my cross-country ski gear. It is particularly damp and cold in the redwood groves that follow most drainages, and there is a frequent inversion and occasional fog in the San Lorenzo. One can quickly go from being comfortable in short sleeves in the sun, to being deeply chilled in a “majestic” (i.e. dank and drippy) forest.

The local coast is lined by roads and trails above the sea cliff, and frequently by sandy beaches below, all of which make decent flat running. There is also a network of trails in the surrounding hills, connecting local parks to form a defensive green belt. (Santa Cruz, like Boulder, has set aside surrounding undeveloped land in an effort to freeze itself as its current residents prefer and avoid being swallowed by a larger neighboring city. As it is already separated from San Jose and the Bay Area by mountains, and connected by only a single winding freeway, Highway 17, it is better-situated than Boulder, which is naturally separated from Denver by only grass and cows. Both cities have predictably expensive housing and a slightly cartoonish feel.)

I no longer have the speed I did when I last lived near the Pacific in LA and trained for road races, and doubt I will regain it, but it has nevertheless been fun to work on my flat running form at sea level. Both form and fitness should translate to the mountains in limited ways, and higher-intensity running is an efficient way to get my necessary exercise. And in the highly unlikely event that I race another ultra, I will be well on my way to adapting to that type of muscular and joint stress.

I have ridden or raced bikes off and on for most of my life. This has often meant riding a road bike in places where there are only a couple of rides, some of them grim. For example, my normal ride in Houston began with ten straight miles along a busy multi-lane road out of the city, and ended with the same in the opposite direction; at least, on the return, I could judge the day’s pollution by whether or not I could see the skyscrapers. I still rode around 200 miles per week, enough to stay reasonably fit but not to be much good as a racer.

In contrast, Santa Cruz is a road cyclist’s paradise: Highway 1 along the coast has broad bike lanes and bearable traffic, Highland and Summit Roads parallel it along the crest of the hills, and many small residential and rural roads connect them. Thus one can ride loops of various lengths and difficulties, beginning with a climb and ending with a descent to the coast and a return via the coast, usually with a tailwind when headed south. I have so far visited Eureka Canyon, Soquel-San Jose, Mountain Charlie, Hutchinson, Zayante, Bear Creek, and Empire Grade Roads, plus the various roads connecting to Empire including Felton-Empire, Alba, Jamison, and Pine Flat. While a couple of these side roads are popular two-lane highways, many are unmarked and little wider than an asphalt driveway. With generally polite drivers and many fellow roadies, the overall cyclist vibe reminds me a bit of the Alps, though without the high peaks.

There are also both a network of fire roads and extensive single-track in the hills, though I have explored them less on my gravel bike. I have ridden fire roads in Nicene Marks and Henry Cowell, and seen many expensive full-suspension bikes both being ridden and riding on the back of people’s pickup trucks in those places and along Highway 9. One seemingly popular area is a network of bandit trails on the upper UCSC campus, which has been taken over by cyclists in the students’ absence.