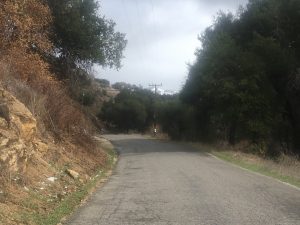 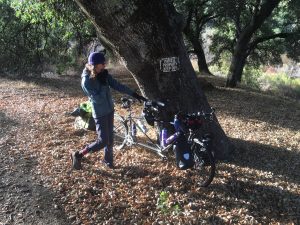 We packed quickly for plausible deniability — we’d been camping less than 50 yards from a No Trespassing sign! The chilly air encouraged a brisk pace and oaks, meadows and ranch land rolled by, protected by miles of barbed wire. We resolved to bring wire cutters on our next central coastal bike and camp excursion.

Since Fort Hunter Liggett we’d been passing through forests and savannas dominated by oaks, the most diverse land-based ecosystems in California. Every year oaks drop millions of acorns packed with protein, carbohydrates and fat. These nutrient packages feed a myriad of animals, while others rely on oak flowers, leaves, branches, trunks and roots for food and shelter. 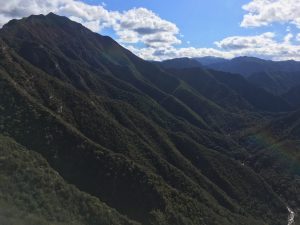 About 15,000 years ago, humans began living among oaks in the land modern humans call California. These original settlers shaped and managed the land for thousands of years in a system of mutual care we lack an English word to describe, though “horticulture” comes close. Selective burning, pruning and transplanting protected their homes from catastrophic fires while reducing acorn pests, improving seed germination and opening vistas for better hunting.

Europeans thought they had stumbled upon a pristine wilderness. Policies of removing people from their land, killing them with guns or disease, and outlawing their controlled burns changed the oak woodlands dramatically. In the 21st century California’s oak lands are threatened by sudden oak death, which has decimated over a million oaks in the past 30 years, an invasive beetle, and development. The varied oak habitat we had been passing through for the past three days was a shadow of its pre-Columbian or pre-human self. 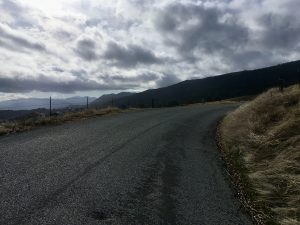 As we discussed oaks and human impact on land, an actual shadow seemed to be descending. Clouds dropped until we felt like we were biking through a moist gray towel. Around mid-morning we passed an elderly GoreTex clad couple out for a walk; they warned us of the imminent storm and lack of camping spots over the next 50 miles. We passed through a landscape of gentrified ranches, mansions set back from the road behind monogrammed gates. The sky continued to darken.

At a crossroads just 20 miles from our previous night’s campsite we turned west on Cachagua Rd. The Esselen had several villages along Cachagua Creek; they called it Xasáuan. Spaniards began settling the area in the 1850s, and a small independent community persists in this remote rugged outpost. We figured they’d be more friendly to dirtbags camping on their lawn than one of the fancy hobby ranchers.

Three or four miles down the winding road we found an unsigned dirt road leading to a clearing. Through the trees we could make out a neighbor’s house about 200 yards distant. A chest high chain link enclosure guarded a pole holding some kind of instruments. On the edge of the clearing Cachagua Creek trickled and sang over rocks. There was a marked absence of threatening signs.

Cachagua Creek feeds into Carmel River, a 36-mile stretch of rills and pools that drains a 255 square-mile watershed. Steinbeck called it a “lovely little river” back in 1945; these days it runs dry every year to slake Monterey Peninsula’s growing thirst. About 20 years ago it was named one of the nation’s ten most endangered rivers. Two years later the Carmel River Watershed Conservancy won a State Water Board grant of almost $200,000 to improve water quality, steelhead spawning conditions, and interagency communication. Their efforts are admirable, but unless California implements meaningful conservation and reuse policies, the threat to the state’s rivers will continue. 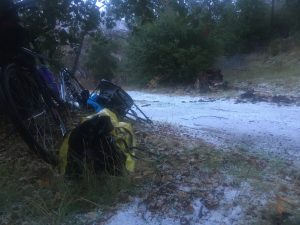 We decided to settle in and wait out the storm. You could bounce a quarter off the rain fly when we were done setting up the tent. Despite the chill in the air, we knew we could stay warm and dry overnight. After tea and cards, Sean sat on a log by the creek to read while I practiced some vigorous yoga to stay warm and work out the biking aches. Just after 4:00 the temperature dropped as the first rain began to fall.

We retreated to the tent for more cards, reading and tea. Dinner was a home-made dehydrated meal we had put together back in Santa Cruz; we cooked in the vestibule to stay dry and warm the tent. We slept soundly despite waking throughout the night when the rain reached a louder crescendo.

The next morning we lay in the tent giggling and chatting as light began to seep back into the heavy sky. Several times the sky went silent for ten minutes, and then returned with a noise like someone was flinging handfuls of buckshot at the tent. A quick peek outside revealed an inch of hail piled at the tent entrance. We determined that the best course of action was remaining tentbound until the storm had calmed for at least half an hour.

Boredom seemed to be our main problem, but cards, books, breakfast and napping filled the hours quite pleasantly. Sometime around noon we heard birds begin to sing again as the sky lightened. Half an hour later we were packed and rolling again.

We were fortunately riding toward clearer skies down the Carmel River, so the temperatures were bearable. Carmel Valley felt like an unpleasant yuppie enclave of wine tasting shops, though it has been home to celebrities ranging from children’s book author Beverly Cleary, to Leon Panetta, to Maurice White, founder of Soul group Earth Wind & Fire. The first overpriced convenience store would not even allow us to refill our water bottles, though the Shell station was friendlier, not even complaining when we refilled our thermoses from their hot water machine, a big and irrational no-no in Covid times. I resented buying overpriced snacks at these establishments, particularly the former, though “voting” with my meager dollars is irrelevant.

Though we had originally intended to follow Carmel Valley road to Carmel and Highway 1, my offline map suggested crossing Laureles Grade on Highway G-20, and showed that doing so required only slightly more climbing over the ridge leading to the Monterey Peninsula. The road was crowded, but the climb warmed us, the grade moderate, and the view from the summit of the afternoon sun over the Bay cheered us. We descended north into a valley opening east of Monterey, taking Highway 68, staying away from the coast, and skipping the city traffic of Carmel and Monterey.

Camping on this semi-urban part of the coast is always questionable, but we lucked into about the best spot one can hope for. We stumbled onto a broad, closed road near Cal State Monterey Bay, on the edge of an “open space” crossed by a network of dirt roads used by joggers and the occasional homeless person. There we found a flat spot among the colorful ice plant, sheltered by oak brush and manzanita from the approaching storm’s winds. The rush of traffic reminded us that we were no longer in the wilderness, but at least our spot was discreet and of uncertain ownership. We cooked our last home-packed meal, prepared our last breakfast, and resolved to get an early start for a change, determined to finish before the coming major storm.

Back to the Pacific