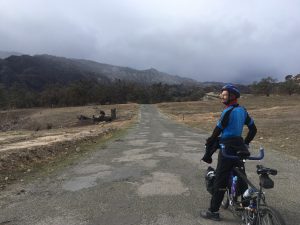 Cooing quail pulled us out of peaceful slumber and we enjoyed cold breakfast, hot beverages and our camp chores as they rustled in the trees and grass, going about their own morning rituals. California’s state bird is highly sociable, often hanging out in multi-family coveys and apparently we were camped near one of their favorite hang outs. Their frequent vocalizations were delightful and our temporary presence didn’t seem to interrupt their activities.

The fully loaded trailer and bike handled remarkably well going down the steep hill of our abandoned forest service road. Our destination that day was another abandoned forest service road, some 45 miles distant, that would take us up the east side of the Santa Lucia Range- if we were able to navigate the closed roads and restricted access involved. Clouds darkened the sky; a storm approaching from the west. Our water bottles were almost empty and the next outpost of civilization was about 20 miles away. We set off with some trepidation. 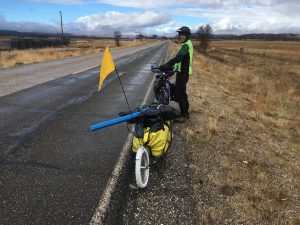 Rolling terrain through oak woodlands under dry skies lightened our mood. A three mile detour brought us to Lockwood, named for Belva Lockwood, the first female candidate for president- she ran in 1884 and 1888. With a population of 379, Lockwood consists of a post office, a community center and a small store. Potato chips and a water spigot were our main interest; we filled water bottles, inhaled 800 calories of salty fried goodness, and pulled on rain gear before setting off into a light drizzle, which quickly developed into slashing horizontal rain. Stories and songs kept us cheerful as we biked through the downpour.

We passed the crossroads of Jolon, less than seven miles from Lockwood but with an average summer temperature 20 degrees cooler. The first European exploration of the Santa Lucia Mountains camped here in 1769, and it’s the setting for John Steinbeck‘s novel To A God Unknown. William Randolph Hearst bought thousands of acres surrounding Jolon in the 1920s and sold it to the US Army in 1942; it’s now part of Fort Hunter Liggett. We saw nothing but a wet crossroads, devoid of life or commerce, but apparently there’s a historic Hacienda designed by Julia Morgan somewhere in the vicinity.

Fort Hunter Liggett beckoned with grassy meadows and stately oaks, gently greening slopes and blissfully traffic free smooth roads. After a 150 miles of barbed wire and No Trespassing signs, a US Army Base looked like welcoming park land. Our route skirted the main business of the base, with occasional armored personnel carriers and a firing range. 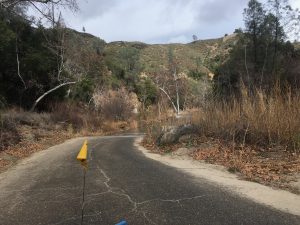 We began to pass signs warning of possible road closures due to high water, but two river crossings barely cleared the rims. The first car we encountered warned us of a ranger up ahead who had turned him back, but when we passed the same ranger he made sure we knew the area was closed and was happy to let us continue on our merry way, biking uphill on a ridiculously loaded tandem in the rain. I guess nobody wants to mess with that kind of crazy. 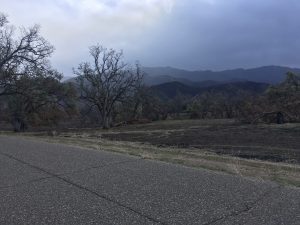 A closed, muddy Memorial Park at the end of the pavement signaled the beginning of our 20 miles through the wilderness. Coordinated rock-hopping river-crossing past a locked gate brought us to the edge of the impact zone of the Dolan Fire, which raged through Big Sur during California’s catastrophic 2020 wildfire summer. One of almost 10,000 fires that incinerated over 4 million acres throughout the state, the Dolan fire burned only 128,000 acres and was allegedly started by a man attempting to cover up five murders. [The case is strange, complicated, and ongoing. — ed.]

We biked up a steep muddy grade through a charred post-apocalyptic hellscape. Thick brown sludge caked the tires and rivulets of churned slurry ran down the road; on the slopes above and below our narrow ribbon of road, bare mineral soil gleamed with moisture beneath blackened tree corpses, their skeletal arms still reaching for the sun though devoid of life. We biked in silent awe, mute witnesses to the impact of water and fire on steep forest. 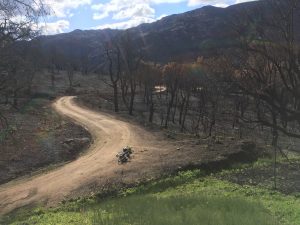 Three miles beyond the locked gate we saw an island of living trees, greenery glistening in the downpour. We pulled into an abandoned campground, where precious flat ground, picnic tables and stacks of firewood beckoned. Everything was soaked and disintegrating; ancient reservations were still pinned to posts, reminders of a distant past when the place probably echoed with the din of campers. We heard only the gentle rain; even birds and squirrels were silent. But the outhouse was open and stocked with fresh toilet paper, the rain abated long enough to set up a cozy dry nest, and we made dinner filled with gratitude at our relative comfort and the chance to view firsthand and up close the aftermath of California’s season of fire.

From whence we came