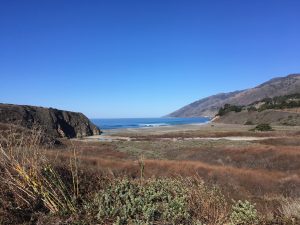 We woke in the coast’s southernmost redwoods, and I almost enjoyed their familiar damp chill in anticipation of a warmer ride south and then inland. After a short ride, we stopped to check out Salmon Creek Falls, a popular tourist spot just a few hundred yards from the road. Judging by the amount of dry moss, the stream was lower than usual, but there was still a pleasant cascade into a pool. The surrounding rock is something blackish, easily polished by thousands of tourist hands and feet to a dangerous slickness. 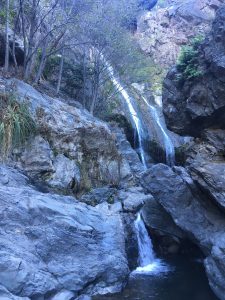 Returning to the tandem, we made one more small climb, then descended to the broadening coastal plain for the rest of the ride to Cambria. The Santa Lucia Mountains, which rise directly from the sea around Big Sur, are here gentler and separated from the coast by a marine terrace that holds flatter roads and placid cows. Rocky cliffs and sea stacks give way to coves and longer beaches, a seasonal resting place for migrating elephant seals, which give birth and mate again in the winter. Before we even saw them, we heard a male’s challenge over the rush of passing cars and crash of waves, a rattling call something like a machine gun or a truck’s Jake brake. 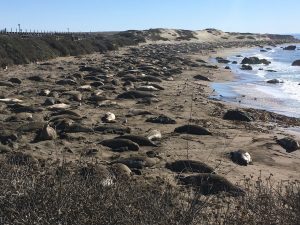 The beach is straight out of a nature documentary, with hundreds of seals side-by-side on the beaches, seagulls flying and walking among them to eat whatever detritus they produce. I found the scene both impressive and utterly grim. The seals are massive air-breathing sacks of blubber — females around 1500 pounds, males up to 5000, and newborn pups around 50. At sea, they can swim thousands of miles and feed enough to accumulate blubber, but they are tied to the surface by their lack of gills, and unable to reproduce or rest. On land they can mate and nurse their young, and the adults are too large to become prey, but they cannot hunt, and can move only with obvious effort, pulling with their flippers and rippling their suet just far enough to be above the waves. 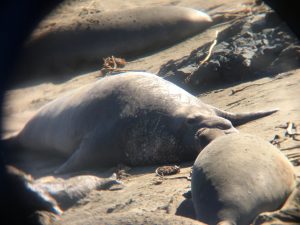 Once there, they remain mostly immobile to save precious calories, flipping sand over themselves. The females nurse, bicker, and are occasionally squished by the much larger males in perfunctory copulation. The dominant males “guard” their harems by mostly lying nearby, occasionally expending the energy to engage in savage fights, roaring and biting each other in the neck. The beta males either stew in helpless sexual frustration, or occasionally make half-hearted attempts to mate with indifferent females while the alphas are distracted by their battles. Like all the ways in which genes replicate at the limits of animal survival, it is as remarkable as it is grim. 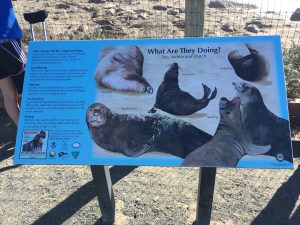 In an hour or so of watching, we were fortunate enough to watch a protracted fight between two males at one beach, and to see hundreds of females and dozens of males at close range at another. Seal-seeing complete, we continued riding down the coast to Cambria, a tourist town at the intersection of Moro Bay and central California wine country. I would normally have little luck anywhere I was so out of place, but Leonie’s outgoing nature helped win over the locals, who directed us to the normal grocery store and a cheap-ish Mexican place. 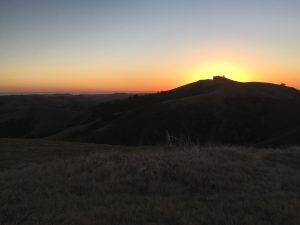 We were thinking of taking the Santa Rosa Creek Road inland, but a local cyclist informed us that it would be both longer and unpleasantly steep on a fully-laden tandem, convincing us to simply take Highway 46 instead. From where we left Highway 1 south of town, we had around 1600 feet to climb to a pass. There was not enough daylight remaining to finish the climb, but we had time to do most of the work before setting up camp. Camping spots were unfortunately limited, however: we were entering the land of open fields, private property, and barbed wire with few or no public side-roads.

After dismissing one disused road to an antenna, we settled on camping on a flat part of the right-of-way, fifty yards off the shoulder and just outside someone’s fence. Half the horizon was soothing, with grassy and sparsely-wooded hills rolling down to Moro Rock and Bay. The other half was a highway climb, with trucks changing gears and cars revving their engines. We focused our attention on the better half, cooked dinner, and apparently looked too harmless and/or exhausted to harass as we slept.