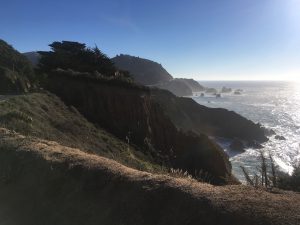 We woke to waves hitting the jetty and wet sand on all surfaces outside our tent, and quickly packed up to hide our night of flagrant law-breaking. We would spend the next few days shaking and brushing the sand out of every crevice, but at least the fog was dissipating, auguring a warmer day. After suffering a bit more Highway 1 — calmer early on a weekend morning — we turned off on Molera Road, then rediscovered the bike route on Nashua and Monte Roads. Soon thereafter, we discovered that the Monterey Bay Coastal Trail begins in the fields along Del Monte Boulevard, far from both the coast and Monterey, and were grateful for the well-paved segregated path despite the lack of traffic.

The path crossed and recrossed the highway on its way through Marina, then paralleled it along the Ford Ord Dunes State Park, a former military base that has become a protected of area of sand being overrun by colorful and invasive ice plant. Oddly, there are two bike paths in this section, and we unfortunately found ourselves on the one closer to the highway, while most others used the one closer to the dunes. The paths eventually merged in the outskirts of Monterey, where the tents of the homeless began to reappear. They are common in Santa Cruz and, I gather, the rest of the Bay Area, and seeing them again made me realize how accustomed I had become to their omnipresence. 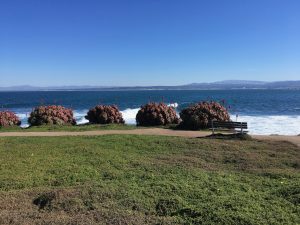 The Coastal Trail turns into a beach-walk through Monterey, teeming with tourists on a holiday weekend, and we were driven to pull up our COVID masks as I snaked the tandem through the oblivious pedestrians, dogs, and other cyclists. Monterey Bay, sheltered from the Pacific swell, is mostly lined by sandy beaches bounded by the collapsing cliffs of marine terraces, perfect for seaside commerce and recreation. Continuing around the Monterey Peninsula, we observed the gradual transition from this protected shore to one battered by the ocean’s full force. The consistent sand slowly turned to small coves separated by rocks, then bare rock and sea-stacks which broke the waves in unpredictable sprays of foam. We stopped for a cartoonishly California lunch of avocado on bread on the coast next to some red flowers, with passers-by in their winter t-shirts and the occasional vintage Volkswagen. 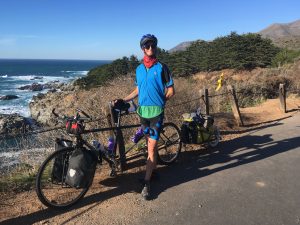 Leonie had previously cut past the peninsula on Highway 1, but had heard good things about 17 Mile Road around the coast. While longer and slower, this route proved far superior to the city slog. Passing through the exclusive communities of Asilomar and Pebble Beach, it winds between the sea and exclusive golf courses, and allows only limited car traffic. This pleasant bike route ends in the exclusive but less pleasant Carmel-by-the-Sea, whose residential streets were a parking lot filled with weekend beach-goers. We regained Route 1 here, which had somewhere turned from a divided highway to a two-lane road. Though the weekend traffic was heavy, drivers were generally polite and slow, mostly sightseers rather than sports car enthusiasts. 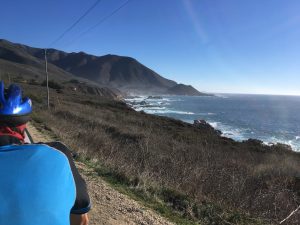 The road south of Carmel is justifiably famous, winding across steep ridges and deep canyons along the beachless coast. This was once one of the most remote places in California, and largely remains so today, connected to the state’s megacities by only a single road that is regularly washed out and closed. It was built from north to south over the course of eighteen years in the 1920s and ’30s, and this progress can be seen from a bike by the dates stamped into each of the many bridges. The most famous, Bixby Bridge, had caused a tourist traffic jam when we were there, but we were able to pass on our bike, then pull off on the narrow shoulder for photos. 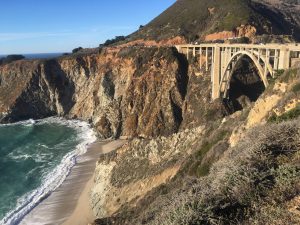 Camping was again a problem: there is no legal camping or overnight parking along the coast road, and even if we had wanted to pay, the state parks were all closed for COVID. We had hoped to take a side-trip up the Old Coast Road to hike Pico Blanco, but either our map or overreaching landowners misled us, and the road’s supposed northern terminus at the Little Sur River was angrily “POSTED NO TRESPASSING.” We missed it the first time, backtracked down a hill, then I bushwhacked down to take water from the Little Sur before reclimbing a short hill and continuing toward Point Sur. 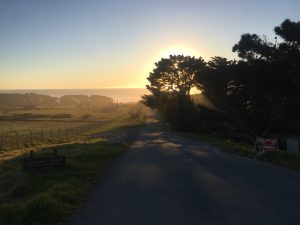 Point Sur, a 300-foot knoll on a marine terrace, was noted by George Vancouver in 1793 and Spanish mariners before him. Its lighthouse was completed by the U.S. Lighthouse Service in 1889, over forty years before the coast highway, to protect shipping on this notoriously dangerous stretch of coast. It remains an active lighthouse, and is also open to guided tours in non-pandemic times. However, both the lighthouse and the small surrounding park were closed when we visited. Fortunately, we found a side-road just past the park where we could turn off and camp under some pines next to a fence. The spot was not quite flat, but at least it was not sandy, both traffic and nearby cows quieted soon after sunset, and no authority figures thought it worth the effort to harass us for our trespass.