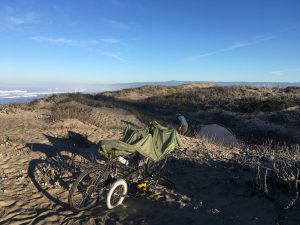 The days were growing imperceptibly longer, but it was still the heart of winter, and the lack of snow in the Sierra Nevada made a visit to the high mountains unappealing. However, with the same dry spell extending to the Big Sur coast, conditions were right for a short bike tour. I had never visited either the coast or the neighboring Santa Lucia Mountains, so Leonie and I seized upon a weather window for an 11-day loop down the coast to Cambria, then back up through the mountains.

I had bike toured before in the southern Sierra and Andes, while she had done much more in Ireland, Iceland, Cuba, and the Mountain West, but most of this had been solo. We briefly debated taking individual bikes, but quickly realized that riding the tandem would be feasible and probably more fun. Considering our existing gear and our 30-year-old $400 tandem (thanks, Terry!), we determined that between Leonie’s front panniers and my Bob trailer, we could carry camping and hiking equipment plus a week food. A quick drive around the neighborhood with the unloaded tandem-Bob showed that it was at least somewhat road-worthy — good enough!

We made a week’s worth of meals from Leonie’s dried food pantry the night before, put out some pseudo-kimchi for our return, then headed south along the Monterey Bay shortly after noon, hoping to camp… somewhere. The weather was sunny and pleasant as we wound through town, trying to avoid major hills and failing to do so around Capitola. A steel tandem with a trailer and around 80 pounds of food and gear has a lot of momentum, which can be problematic going both up and down. The rig slows to a crawl almost immediately going up, but I learned to shift to the lowest gear quickly, conserving my anaerobic strength for where it was truly necessary. Going down, the old caliper brakes proved to have enough stopping power, and the bike’s sheer length and bulk seemed to prevent the trailer-induced speed wobbles that had occasionally terrified me in South America. 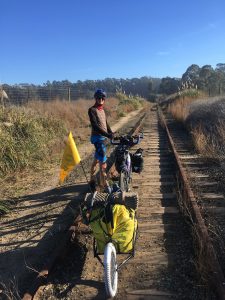 The Pacific Coast bike route is mostly signed, but we lost the signs somewhere south of town in some farmland. We briefly explored some decommissioned railroad tracks, wound through a neighborhood, missed a right turn, and ended up at a gas station on Highway 1. Fortifying ourselves with potato chips (one of the best things about bike touring is the guilt-free garbage food), we rode past the “no bikes or pedestrians” sign onto the divided highway, figuring that no cop would waste his time stopping a confused couple on a ridiculous tandem, who clearly would rather be riding anywhere else than on a highway. 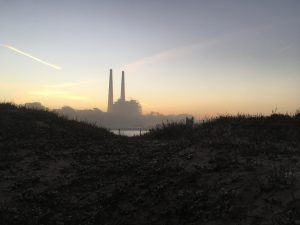 Nearing Moss Landing, we descended into the double estuary of the Pajaro and Salinas Rivers and their cold fog. The day quickly turned from pleasant and sunny to frigid and damp, which combined with the constant truck traffic and lack of obvious camping to put me in an anxious mood. At the first opportunity, we pulled into Moss Beach, riding past the indistinct masts in a harbor and a long line of parked cars and signs making it clear that one should not walk in most places, and most certainly should not camp in any. So of course we pushed the tandem under the “no walking” rope and set up our tent in a depression hidden from the surfers and beach-walkers.

Camping on the beach sounds picturesque or romantic in the abstract, but in practice it is mostly just cold and gritty. We tried to keep the sand out of the tent and our bags as much as possible, but inevitably some snuck inside clinging to our socks and every other damp bit of gear. Dinner came early, and sleep soon after despite the lighthouse, crashing surf, foghorn, and vague threat of punishment for our flagrant law-breaking. Waking in the middle of the night, I realized we had camped across from the power plant, whose lights in the fog reminded me of the city in Blade Runner. It was an unfortunately urban start to a wilderness bike adventure, but our hastily-assembled gear had performed well, and the scenery would only improve.