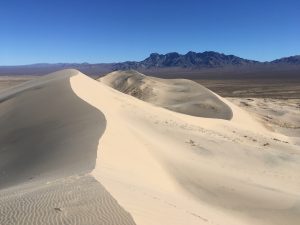 Our time was growing short, but we still had a long drive back to the coast, which we chose to break up with a visit to the Mojave Preserve. I had visited before to bag some desert peaks in 2012 or 2013, which I remember mostly for thrashing through oak-brush and getting a tick embedded in my armpit. It is also a step down, desert-wise, from the Sonora, with all of the nasty spiny things and none of the towering saguaros or organ pipe cacti. But the Preserve is a large and varied place; I think of it as occupying the triangle between Interstates 10 and 40 east of their junction Barstow, extending to Highway 95, but it is in fact an uneven blob lying mostly between the Interstates, between Zzyzx and the Nevada border. It is harsh country with only a handful of roads, but for some reason both east-west Interstates, and the Union Pacific and BNSF Railroads, all pass through nearby. 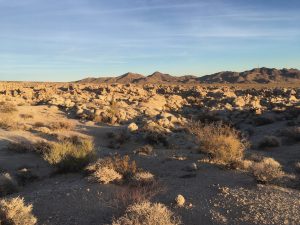 Leonie is more of a desert person than I, having scrambled and backpacked in the Mojave on multiple occasions, and suggested visiting the Kelso Dunes and some granite blobs at the south end of the park, which we eventually figured out were called the Sheep Corral. After a tedious drive up 95 to Quartzite and along 40, we got off at the Kelbaker Road near the Granite Mountains, and found the Sheep Corral road with only a bit of exploration. The area is a field of batholiths similar to Joshua Tree, which start off above ground near mountains, but are mostly below the surface down in the plain, exposed in a maze of washes. The best camp spot was occupied by someone who seemed to be there for the long term, with gallons of water and a large propane tank, so we parked just outside, then set out to explore. 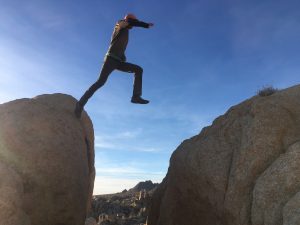 We were hoping to find scrambling like in the Buttermilks or rock-piles near Twentynine Palms, in which one can make up a class 3-5.easy route. However, much of the “rock” we found could barely be called such, decomposing and exfoliating granite desperately wanting to become kitty litter. We found a bit of sketchy scrambling on some of the darker orange blobs, which had been weathered or baked into climbable condition, but were mostly disappointed and frustrated. At one point Leonie took out her frustration by pulling plate-sized pieces off an exfoliating blob and throwing them to the ground, where they completely disintegrated. 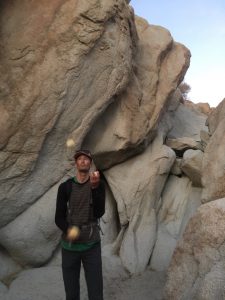 Toward the end of the day we finally found some decent rock where we should have known to look all along: next to the washes, where sporadic flooding had dug out the sand and, of course, cleaned off the loose rock. We lacked the daylight to explore, but now knew where to go if we returned. The long-term resident turned out to be a climbing steward at Joshua Tree who was quarantining after a close Coronavirus contact, who was familiar enough with the Sheep Corral to know its potential. I wanted to stay and talk to him longer, as he had lived out of his car and traveled the Mountain West for several years, but it quickly became unpleasantly cold once the sun set. After dinner, we dragged some bedding down to a sheltered place in a wash to look at the stars. Though there is some light pollution from I-40, Barstow, and probably Las Vegas, this is still a relatively good place from which to observe the night sky. 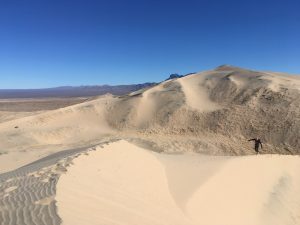 The next day we set out to climb the Kelso Dunes, which collect north of the Granite Mountains. Though they are not as high as Colorado’s Great Sand Dunes (650 vs. 750 feet), and are no longer growing, they are still impressive and, more importantly, have an entry in the Peakbagger database, so I get points for them. We got to the trailhead before all but one other party, so we had the “trail” mostly to ourselves. The sand was just warm enough to hike barefoot, and the climb is not too long or tedious if one follows the ridges. Along the way we experimented with the “singing sand”, a type of resonance that occurs on the leeward side of Kelso and some other dunes. One necessary component seems to be large areas of sand sitting right at the angle of repose, where one can trigger expansive sand “slab avalanches” by stomping on the edge of the dune or, sometimes, up to a foot or so back. This only works once on a slope, until the sand reaccumulates for an unknown period, so we were lucky that it worked along a ridge on the standard route. 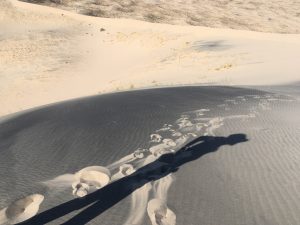 We lucked out and had the summit to ourselves for ten minutes before others started straggling up from the trailhead and campground. Most people only go to the highest dune, but the Kelso Dunes are expansive, with dunes nearly as high extending east, and lesser ones to the north. We made a loop over the eastern dunes, despoiling more virgin slopes to enjoy the resonance and jumping off their edges. One other interesting feature of the Kelso Dunes is their magnetite deposits. This iron oxide is heavier than silica sand, and collects to create striking black highlights on the surface of some dune aspects. We eventually wandered back to the car, then spent a bit more time in the Sheep Corral before continuing toward home.

Screwing around on sand