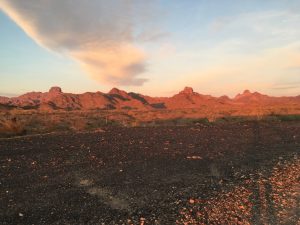 [Thanks again to Leonie for an early draft of parts of this. — ed.]

The Kofa Mountains are a remote desert range east of Highway 95 in southwest Arizona, surrounded by an eponymous BLM wilderness area created to protect bighorn sheep, and a proving ground created to blow stuff up. “Kofa” is not a native word, but a contraction of “King of Arizona,” the name of a briefly successful gold mine. The area is mainly a popular refuge for winter RVers, but it also includes two of the better summits on the DPS list, Signal and Castle Dome Peaks. Since it is roughly on the way between Organ Pipe and the Owens Valley, we decided to pay it a visit.

The original plan was to put in several hours’ drive, visit the mining museum, then camp at the Castle Dome trailhead before climbing it the next morning. We drove a mix of desert roads and Interstate 8, then turned north before Yuma on 95, which rivals 50 for the title of “Loneliest Road in the US.” Upon turning toward Castle Dome, we were met with signs saying “NO STOPPING NEXT 5 MILES,” with the clear but unstated implication that those who stop might end up on the wrong end of a live fire exercise. The road was as washboarded as expected, but otherwise fine, and the ten miles to the museum passed painlessly. 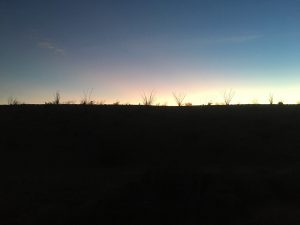 Land ownership is unfortunately complicated in the valley: in addition to the Yuma Proving Ground in the south, there are many private parcels within the BLM land, including the mining museum and its environs. Going back as far as the 1990, and as recently as early 2019, one could drive past the museum on a good dirt road to Castle Dome’s base, through three unlocked gates. However sometime between February 2019 and January 2020, the unfriendly owners of the mining museum blocked this access route, locking the gates, rolling large rocks across the road, and adding signs threatening even pedestrians. Their stated reason is that people were stealing mining junk from the abandoned claims. It was not clear to me whether it was legal to block this access to federal land, or whether the road should have remained a right-of-way, but I am not a lawyer, and the lady at the museum office talked about calling the nearby feds on people. Given that said feds have both serious guns and a surveillance blimp, it seemed like a bad idea to try poaching the peak. (I later found a trip report describing the new, longer, and rougher access route.) So instead we went for a walk until it got dark, then went to sleep under the blimp’s watchful gaze. 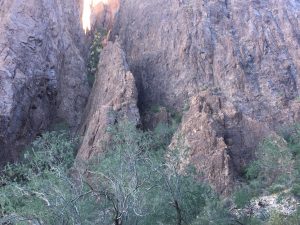 With our late and messed-up start, we salvaged the day by heading over to Signal, the Kofa Range’s other DPS peak. Both it and Castle Dome are impressive, as are a number of the peaks in between, though the latter is both more dramatic and less difficult, at least from the west. There is an easier trail up Signal’s east side, but it involves more dirt road driving, so we followed Bob and took the west route via Palm Canyon. This requires a small amount of low-fifth-class climbing, though much less than one would expect given the peak’s sheer aspect. The canyon is named for its small grove of California fan palms, the only one in Arizona. 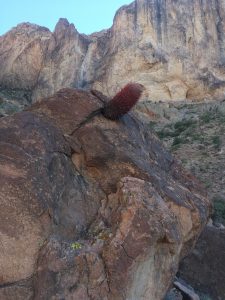 Though we started late around 10:00, it was still cold and shady for our approach, so I was hiking in my down jacket. We met three guys hanging out near the palms, which are nestled a couple hundred yards up a side-canyon, but decided to see them on the way down, since we had an unknown amount of climbing and desert thorn-whacking ahead of us, and standing on top of piles of rock is always more important than seeing unique flora. The official trail gradually fades into a faint and intermittently-cairned use trail, then further decays into braided game trails made by the apparently abundant but shy sheep. 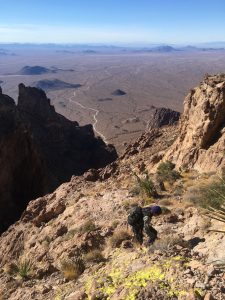 The canyon is filled with all manner of unpleasant desert plants; in addition to the usual cacti and yuccas, there are woody and prickly oak-brush, and some other plant, much greener, with actual spines on its leaves. Clearly neither plant wants to be eaten, and both go to extravagant lengths to make this desire clear — such is the desert. The trail climbs one ravine to where it ends at the peak’s west cliffs, then climbs into its neighbor to the right. Where the second ravine is choked with impenetrable brush, a fourth class wash leads out to the left. I scrambled up, unsure whether this was the correct route, and Leonie leerily followed. Where this branch ends, I spotted a thin and slabby traverse leading right around the difficulties, which felt low fifth class to me. I pulled out the rope in a frigid alcove, then trailed it around the corner and up 30 feet to an old anchor, from which I belayed Leonie. A few minutes higher, we finally reached our first sun of the day and were able to stop for a sort-of lunch. 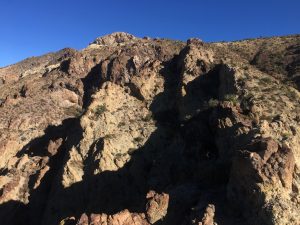 From our lunch spot, we followed a mixture of class 2-3 rock and desert thrashing up what turned out to be a side-ridge, then descended to a narrow saddle before climbing again to the summit plateau. The Kofa Range seems to have confusing topography, with confusing branching gullies and unexpected cliffs, so I was glad to have a clear track to follow, and to be doing this part during the day. We summited at 2:50, painfully aware of the limited remaining daylight, but still took some time to enjoy our surroundings. Castle Dome looked every bit as impressive from this direction, and the rest of the range looked interesting as well. Nearby Ten Ewe seemed straightforward from its saddle with Signal, with its high east face suggesting long technical routes. A dramatic pinnacle to the south turned out to be Squaw Peak, about which I could find nothing online, and which looks technical from all sides. 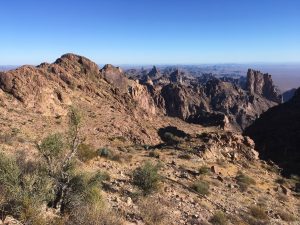 But we were running out of daylight, and soon deployed into hustle mode — in the wrong direction. Heading east following Bob’s route, we hoped to skirt the cliffs of the summit block and return to the car via Four Palms Canyon, sparing us tedious rope-work on the descent. After a decent trail devolved into chossy steep slopes we abandoned this plan, retracing our steps, forfeiting 45 minutes of precious daylight and dooming ourselves to some hard headlamp hours. The return trip involved scrambling, loose slopes, circuitous route finding, encounters with spiky shrubbery, a rappel, lowering Leonie down a sketchy clifflet and ferocious wind. We stumbled like drunken teens as fatigue set in hours after our headlamps came out. Despite a 20 pound rock rolling into her calf and a yucca drawing blood below her knee, Leonie maintained good humor, reciting poetry, telling jokes and singing an improvised song to the tune of “Both Hands” by Ani DiFranco: 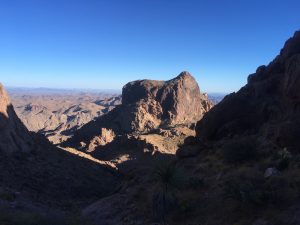 After I offered her my brighter headlamp I led the way by her fading one and the flashlight from my phone. Intermittent GPS and occasional cairns guided us down the boulder strewn wash sprinkled with bloodthirsty desert flora. After a reckless backtrack and the determined application of my will and cellular data, I found a trail whose quality improved as we moved closer to the trailhead. We consumed our last calories and rejoiced in our ability to walk unhindered for the final hundred yards, reaching our twin Honda Elements at 8:30, thoroughly exhausted.

I mashed canned chicken into stale sandwich bread for dinner, while Leonie chewed on a red bell pepper and listened to Nordic folk music. We squirmed into bed in Leonie’s pop-top camper at 9:30 and were tormented by the wind until dawn. Aaah, Signal mountain… winter desert peaks with a start time after 11 AM. We sure ain’t never gonna learn.