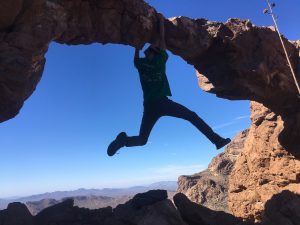 Organ Pipe Cactus National Monument is about as far south and down as Arizona goes, so it was perhaps inevitable that we would end up there eventually. It was established during Prohibition, when the state donated the land to the federal government so they would pave the road, making it easier for bootleggers to smuggle booze up from Mexico. Since then, it has gone on to protect the far northern reaches of the Sonoran desert, which lies mostly in eastern Baja and north-central Mexico. Though the most distinctive species is the organ pipe cactus, a bundle of five- to fifteen-foot-tall stalks several inches in diameter, the park’s lowlands are most notable for their dense forests of saguaros. Most of the park lacks roads and trails, but there are two scenic loops on either side of Highway 85, each with several short tourist trails, a few well-worn use trails to some landmarks, and some migrant trails with the usual detritus of Mexican tuna cans and candy wrappers.

Organ Pipe is known among peak-baggers for its two DPS peaks, Ajo and Kino, both of which seem to be the typical desert fare: a long march across an alluvial plain followed by a slog up rotten volcanic rock covered in spiky plants. Fortunately there are other things to see, including the flora and fauna (e.g. javelinas, occasional desert bighorns), some cool volcanic features and, arguably, an interesting visitor center. We checked out the latter, then headed across the street to the eastern scenic loop, intending to tag Ajo Peak. 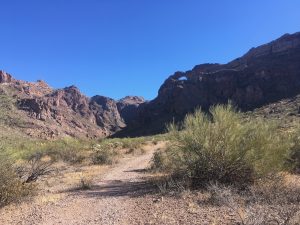 Partway around the loop, we were distracted by a striking pair of natural arches, one on top of the other. Unlike those in Arches National Park, which are carved from sandstone by wind erosion, these seem have formed from volcanic rhyolite and breccia (a.k.a. “choss”) via the universe’s natural trend toward greater entropy. The lower arch is around twenty feet high and fifty long, while the upper is twenty long, less than ten high, and only a foot or so thick at its thinnest point. Given the nature of the rock, this may become a single arch within my lifetime, but fortunately the upper arch is too difficult for most tourists to reach. There is an official trail up the wash toward the two, then a well-used social trail to the base of the lower one. 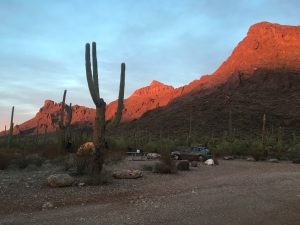 Since the sign said that the lower arch was only a mile or so away, we left our packs in the car in anticipation of a quick hike. We followed the official trail to its end at a sign warning about illegal immigrants, with graffiti urging people to “give them water!” There is a tension along this part of the border between enforcement — two checkpoints along Highway 85, and 500 Border Patrol agents since a ranger was killed in 2003 — and aid — official emergency call boxes topped by flashing blue lights, water stations, and no doubt volunteer water caches. With summer air temperatures well over 110 degrees, rugged terrain, and a long hike to civilization at Ajo, the crossing near Sonoyta seems dangerous, but it also seems popular judging by the empty water jugs and camp remnants. 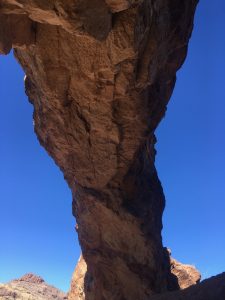 The arch trail was steep but easy to follow, and we met another couple on their way down. The trail climbs abruptly to the ridge, then traverses and descends to the arch’s base, but peak-bagger that I am, I of course wanted to stand on top. We briefly explored the near end, but could not tell where the main arch began or ended from there, so after draining a fresh tinaja, we continued to the inside of the arch, then took a look at the far end. The south side looked unwise to climb, even with rock shoes, so I went around to explore the north side, sparing Leonie a probable waste of time.

After a false start, I continued around to find a route that was no more than class four, and seemed to reach the top. I scrambled up to an intermediate plateau, then called for Leonie to join me, assuming with my usual optimism that the rest of the way would be no harder. One more slightly exposed traverse and scramble got us to the top of the main arch, where we found a sidewalk in the sky leading to the tiny upper one. I was tempted to walk across the mini-arch, but it was only a bit over a foot wide and less than that deep; it had probaly held for thousands of years, but it likely saw little foot traffic, and I would have been crushed (and possibly injured) if it collapsed under my weight. Instead we took turns hanging from it, then completed the loop by scrambling back to the trail side, passing an old piton along the way. The area appears to have a lot of climbing potential, and seeing hardware on such a minor and not-too-difficult route made me think that someone from nearby Tucson had explored it. 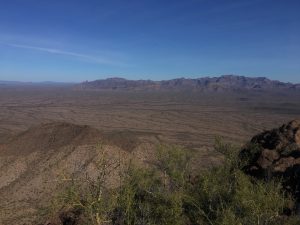 Organ Pipe is far away from anything else, so it made sense to spend multiple days there. The natural thing for me to do would be to climb Ajo, which we had not had time to do after the unexpected arch diversion, but that would involve repeating the same 20-mile dirt “scenic” drive, so we looked around for something else and settled on Pinkley Peak, in the opposite direction from the visitor center. The friendly ranger there had suggested a loop up the peak and along the ridge to Dripping Springs, returning along another one-way scenic road, advice that seemed to reflect her enthusiasm, overconfidence in our abilities, and lack of experience. 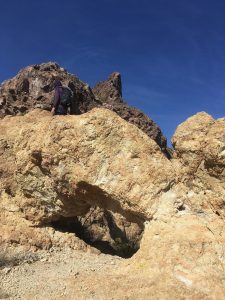 Pinkley rises like a constellation of spiny plants in the firmament of volcanic choss northwest of the visitor center. While a few dedicated peak-baggers climb it from the end of the two-way dirt road, not enough do so to create a use trail or even a line of cairns, so we parked at the picnic area, then took off on what seemed like a plausible line up a wash toward its summit ridge. The ranger had noted correctly that cross-country travel in the Sonoran desert is easy across flat ground, and rough in the washes, but all parts of the hillsides seem similarly difficult. The ravines are still brush-choked, but the ridges are often rotten, sometimes cliffy, and frequently covered in dense cholla and catclaw. They are also confusing, since the slow erosion seems to create complex and unintuitive topography. 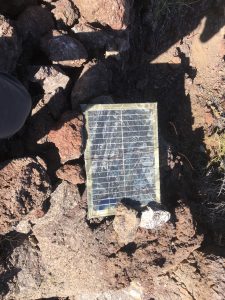 Passing some interesting geode-like rocks embedded in breccia, we eventually reached the summit ridge, where we were met with more solid rock and some difficulties. We passed one step via class 3 terrain to the right, another via an angled chimney-ramp, then traversed left to avoid a false summit. In returning to the summit ridge, we found the day’s only solid rock, some dark class 3-4 slabs. To my surprise, we had continued to find occasional Mexican tuna cans along the way, and found a camping cave just below the summit, with some foul bedding, a solar panel, and an antenna attached to a yucca. With a clear line of sight to Sonoyta, and probably somewhere in Arizona, this peak seems to have at one point been an observation post for smugglers of people or contraband. There was of course no register, and no comfortable seat amidst the volcanic choss and desert flora, so we stayed only long enough to eat an avocado before descending.

I had downloaded a GPX track with my summit cell service, hoping it would lead us to a better route, but sadly this was not the case. The descent route was different in its particulars, but essentially the same as the ascent, a mixture of choss, short cliffs, and spiny plants. All sensible routes on Pinkley seem to be moderately unpleasant, and will remain so until the peak-baggers and smugglers get together to make a trail. Until then, this peak will never become a desert classic.