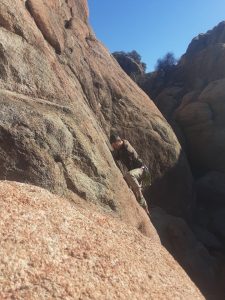 After Leonie and I took care of things in opposite directions — me closer to her home, and she closer to mine, ironically — we needed to meet somewhere in between, and chose Prescott because it was a roughly equal drive for both of us, not too far out of the way, and south-er, lower, and presumably warmer than the now-frigid southern Utah deserts. We met off I-40, then found a… perfectly adequate place to camp along Highway 89, in a National Forest mattress-dumping area. It reminded me a bit of the start of my 2016 road trip with Renee, though with only a handful of clean-picked cow carcasses in place of the dead sheep. 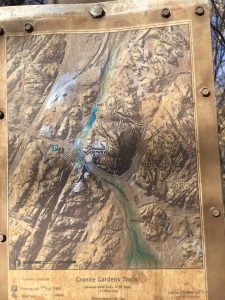 In the morning we drove into town and stopped at the first likely climbing spot, Granite Gardens, an improbable collection of granite blobs nestled in a neighborhood north of downtown. Though we had come to central Arizona for warmth, it was too cold for climbing, so we decided to take a hike/scramble first to get an overview of the area. We were immediately surprised by the visitor-friendly signs at the trailhead and at intersections, which had both numbers and small maps. Unlike most places, where climbers are at most tolerated by the surrounding communities, they seem to be almost welcomed here, though one crazy neighbor lady apparently objects. 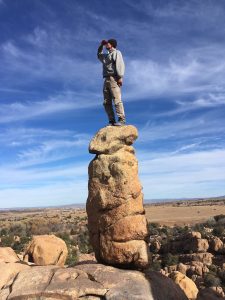 We started off along the outermost trails, then left to scramble up one of the easier formations to get a view. Though houses encroach in all directions, the granite formations hide enough to offer a pleasant view, and Granite Mountain and Thumb Butte, a basalt volcanic plug, beckoning to the west. We rejoined the loop with a bit of down-scrambling, and were making our way around the far side when I noticed some bolts on a wall. As I checked out the start of the route, which felt hard, a man with a limping dog hailed us and eventually introduced himself as Jared. He turned out to be not only a local climber, but one of the people active in local route development. He named the routes on the wall (including “Full Metal Corndog” and, of course, “Corndog Millionaire”), then took off for home to get his climbing gear while we returned to the parking lot for ours. 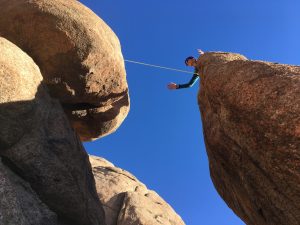 We spent some time climbing a few progressively harder routes on the short Corndog Wall, then moved on to climb “Hop, Skip and a Jump,” a moderate but improbable route ascending a fin or arete with a gap crossed by a large and committing step or a short jump. I always enjoy jumping things, so I found the move fun, but Leonie did not especially enjoy it, taking five minutes or so to prepare herself and/or psych herself out before making what, with her flexibility and balance, was a straightforward move. Shenanigans complete, we finished up with some harder but more normal routes nearby, leading a 5.8 and toproping a 5.10d. The 5.8 felt reasonably serious to me, but I led it cleanly, and more-or-less cleanly toproped the 10d after Jared spent quite a bit of time working out the crux sequence.

We had planned to camp in some National Forest outside town, preferably somewhere with fewer shot-out TVs, but Jared kindly invited us for dinner and to use his spare bedroom and, crucially, shower. I do not expect such hospitality from strangers, even less now in our pandemic times, but traveling with an attractive and sociable woman does have its advantages. Jared turned out to be a fascinating guy, with interests ranging from Mary Oliver’s poetry, to guitar, to deer hunting with native bows he makes himself. We finally turned in after a folk sing-along, with plans to climb with Jared the next day. 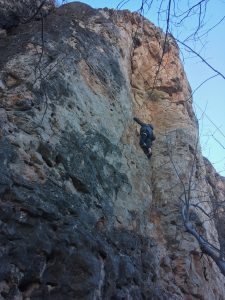 The next morning we piled into Jared’s Honda Element — the only one with enough room for three people — and drove back up Highway 89 to near where we had camped to visit some “secret” limestone sport crags. We drove an obscure dirt “road,” followed a faint cairned trail to a canyon, and descended through a band of basalt to the bottom. There limestone bluffs intermittently emerged from the otherwise volcanic walls, some hopelessly rotten, but others solid enough to climb, though apparently only after significant cleaning with a pry-bar.

Jared kindly allowed me to do the leading, while he and Leonie took turns following and belaying. Limestone is much different from the previous day’s granite or the sandstone I had climbed with Renee in Sedona. Because it features sharp-edged slots and pockets, and is rough and grippy, routes are steep for their grades. This means that falls at grades I can hope to climb are safer, but also that the rock tears up one’s fingertips, and that it is easy to exhaust one’s forearms. Proper technique requires using small footholds, subtly shifting one’s weight, and strategizing about how and when to spend limited forearm strength. 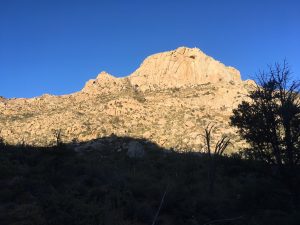 I had climbed limestone before in the Dolomites and crags around the Tetons, so I took to it quickly and enjoyed the different style of movement. Leonie, just getting back into climbing and used to Sierra granite, was less comfortable, and took awhile to learn the best technique. For once her flexibility worked against her, as it is often best to make small upward movements with one’s hands and feet instead of big reaches and high steps. I led two routes on a wall downstream, then two more on one just across from the approach trail. On the second-to-last, I realized partway up that I had two too few draws, forcing me to choose a couple of bolts to skip and run it out. It was all thoroughly enjoyable climbing, and we were lucky to have met a local willing to share it.

We had only planned to stay for one night, but Jared insisted upon making curry for us, and it was hard to refuse another night of running water and heated space. We stayed up “late” again (where “late” for a winter dirtbag means several hours after dark), talking about life and even some politics, then turned in to enjoy a last night of civilization. Jared had to take off early the next morning, but kindly allowed us to depart at our leisure, so we enjoyed a final hike and shower before heading down and south in search of warmth.