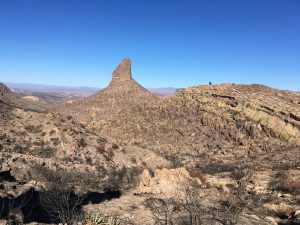 [Thanks again to Leonie for significant contributions and help writing this quickly and promptly, and for photographic help. — ed.]

I had already climbed Weavers Needle, but a sunny mellow southern Arizona peak is just the ticket for taking a new girlfriend for a test climb. After a leisurely breakfast of bean tacos and avocado we hit the trail at the crack of nine. The parking lot was a snarl of shiny SUVs and the trail was infested with families and groups no doubt spraying Coronavirus on us as we passed.

Less than a mile in we found Bob, a 70 year old Forest Service volunteer, and Leonie paused to pick his brain about possible backpacking loops. We devoted the next hour to Bob’s recounting of feral apples at the Reavis Ranch and his extensive journeys into the back country of the Superstition wilderness. He and his family had seemingly lived in the area for decades, and I wanted to learn more from before Phoenix exploded, but we had a peak to climb.

Onward, up to the pass where the crowds thinned and we had the trail to ourselves. We cruised down to the use trail towards the Needle and I watched as Leonie picked her way up loose scrabble terrain. A fire since Mike and I had climbed the Needle in 2014 had greatly improved the area, eliminating the catclaw while leaving the cacti and yuccas intact, and simplifying the approach. We continued up the third and fourth class scrambling to a new intermediate anchor, replacing the old pipe, where we roped up. I trailed a rope as I stemmed up the steepening gully and thrashed around the crux chockstone; Leonie groveled even more and somehow landed on top sideways. Rumor has it that tunneling underneath is 5.1, while the lefthand side is around 5.4, but the tunnel looks awfully narrow.

More fourth and fifth class scrambling interspersed with gravelly steep slopes brought us to the summit, where we explored our underwear modeling careers before returning the way we had come. Leonie kept it together while the down climb challenged her preference for facing out (why do people do this?), and we returned to the chockstone and a mildly sickening overhanging rappel.

One of us managed to wedge the rope firmly into the pinch between the chockstone and the right wall, forcing me to climb back up to free it. While I was muttering and flailing the rope, we saw the first two people since leaving the pass — two guys planning to sleep on top. As I was rappelling the second pitch, two Frenchmen from the Bay Area showed up to join the summit sausage party. Leonie down climbed as I completed my rappel, then we flaked the rope and set off to race the fading daylight.

Down we went over more steep and unstable loose slopes through the burn area, flakes of burned cactus leaves and a saguaro bark remnant that resembled plastic corrugated roofing. I chose a different line of cairns, which left us thrashing through thorns and rounded boulders until we stumbled upon the trail. Clearly the work of fire here is not complete. Two hours or so of headlamp time later, we were back at the now mostly empty trailhead. I would have been faster without Leonie on the rocky trail, since headlamp jogging is what I do, but she kept me entertained with jokes and tales of bartering two silver rings for the use of a horse in rural Tibet many years ago. We whipped up some couscous-based nutrient glop back at the car and were sleeping by 9 PM.

Fortunately there are other career options

Scramble down to rappel gap

One response to “Weavers Needle”