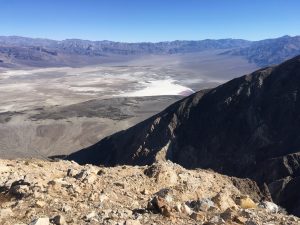 The Inyo Range parallels the Sierra Nevada across the Owens Valley between highways 168 and 190. Along with the Panamint and Sierra Nevada, it is one of three neighboring ranges rising about 10,000 feet from the valley to its east. Unlike the other ranges, the Inyos do not have a paved road or civilization on their east side. The Saline Valley contains only a dirt road and some hot springs, now closed due to the Coronavirus; the miners that once lived on that side of the range built their cabins several thousand feet above the valley floor, near the springs in nearly every canyon. Since many of the canyons narrow to slots near the valley floor, these cabins were difficult to access, sometimes even requiring sketchy hand-built ladders.

Crossing from the Owens Valley to the Inyo and back again was not my idea: it involves too few peaks and too much desert suffering. However Kim is drawn to such things, and as I age, I find fewer ridiculous projects in the western States that motivate me. There are several ways to cross the Inyos on “trails,” one of them being via Forgotten Pass and Beveridge Canyon. We had attempted this from the Saline side this spring, but were too late in the year, and gave up after reaching Forgotten Pass, tagging Voon Meng Leow Peak as a consolation prize before returning to the roasting desert. This time we came from the Owens side. The sun would be against us, as we would reach the Saline Valley around mid-day, but the Owens side of Forgotten Pass is easier to negotiate by headlamp, a necessity so late in the year. 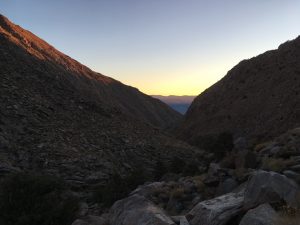 I met Kim at the 2WD trailhead along the graded Owenyo Road, where we slept until 2:00 AM before taking Kim’s 4Runner up the “road” — some faint tire tracks dodging boulders and creosote up an alluvial fan — to the “trailhead” — the place where the 10-foot-deep main gully has made vehicular travel utterly impossible. From there we followed the “trail” — occasional footprints and cairns leading up and along the wash — to a trail register and some built-up switchbacks. Welcome to the Inyos! Fortunately Kim had both familiarity and a GPX track from previous forays, and it was close to the full moon, so we had no trouble following the path to the pass, or descending the other side to Frenchy’s Cabin, our water source for the crossing. Temperatures stayed more or less in the upper 20s or 30s, though the air was somewhat colder in the vicious Owens Valley inversion at the 2WD trailhead, and at the pass itself.

I had anticipated a 20-hour day, and was therefore surprised to reach Frenchy’s at the end of headlamp time. Someone had clipped back the bush and repaired the waterspout since we had visited in the spring, but there was a noticeable pool of cold air at the cabin, so we did not linger. Whoever had worked on the cabin had also done sporadic work on the trail down to Beveridge, so the previous brush-fest went quickly and painfully by Inyo standards. 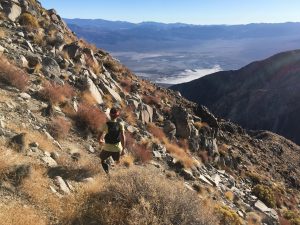 The mental crux of the route is a long, rolling traverse out of Beveridge Canyon. The bottom is brush-choked and possibly steep and narrow below the “town” of Beveridge, so the trail traverses up and out to the ridge to its north before descending to the Saline Valley. This section, through scrub, decaying granite, and sand, has mostly collapsed over the years, and is frequently nearly useless or invisible. While it is easier than going cross-country over the surrounding terrain, it would hardly be called a trail anywhere other than the Inyos, and is a prime example of how I have badly underestimated travel times on previous trips to the range. 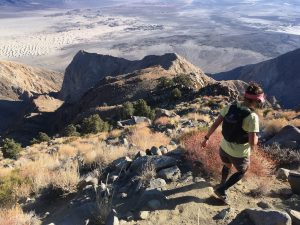 Beveridge Ridge to the valley

The trail improves once it reaches the ridge north of Beveridge, then gets even worse as the ridge narrows and it leaves the crest. It perhaps used to switchback down this slope, but there is no longer anything resembling a trail for much of the route between the crest and some washed-out mine roads far below. Though it must have once been passable by the mules that dragged the heavy materials up to Beveridge, the route now includes short sections easy class 3 rock and dirt. Struggling to get at my Pop-Tarts on the way down the easy part, I managed to superman onto the trail’s sharp limestone, though I got away with only a couple of cuts and blood blisters on my palms. I was therefore more cautious than usual on the steeper part. We jogged the badly-eroded mine road down to its junction with the Keynot Ridge “trail,” then deemed that we had reached the valley floor. 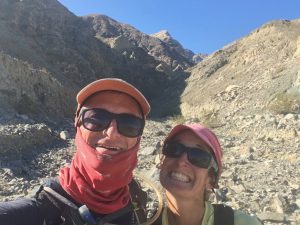 Now we have to go back?!

Though it is only 14 straight-line miles from Lone Pine, the mouth of Beveridge Canyon is a much longer drive around via the Saline Valley Road. The horizons in both directions are completely different from those in the Owens Valley, with the Inyos’ larger and more dramatic east side to one side, and the similarly hostile desert ranges of Death Valley to the other. I therefore felt more remote than I would have on the Sierra Crest, a similar distance in the opposite direction from town, or on summits deeper into the Sierra Nevada. It is not even such a long way by trail — 32 miles and 16,000 feet of climbing round-trip — but it felt like a day trip between two disconnected lands.

The midday climb back out of the Saline Valley could be crushing, with brutal heat, no shade, and a parody of a trail climbing thousands of feet. However it was much cooler than when we had visited in May, with mostly comfortable t-shirt conditions on our hike back up the road. The trail was no easier to find going up than down, following sporadic cairns and footprints. Because this section of “trail” would be nearly impossible to follow at night, late fall seems like the only reasonable time to do the Inyo crossing, despite the short days and cold temperatures up high. Like similar desert routes with ten thousand feet or so of elevation change, like White Mountain’s west ridge and the L2H route from Badwater to Whitney, this route has a narrow window of opportunity. 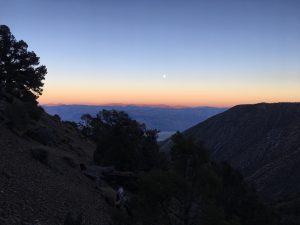 The long grind from the valley back to Frenchy’s is more tolerable when broken up into four stages: the headwall out of the valley, the climb up Beveridge Ridge, the sidehill traverse, and the bushwhack from Beveridge to the cabin. The whole thing is overwhelmingly grim, but each part by itself is small enough to be tolerable. We reached Frenchy’s by late afternoon, feeling more positive than I had expected, and on track to finish much earlier than the 10:00 PM or so that I had feared. However it was already unpleasantly cold: cold air pools in the canyon and the sun apparently does not reach the cabin this time of year, so there was still ice on the ground next to the spring. We filled our water, Kim stepped in the stream, I froze my hands, and we started off again as quickly as possible to warm up. 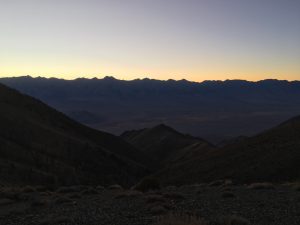 We reached the pass right at dusk, watching the moon rise over the Last Chance Range as the sun silhouetted the Sierra. We checked our phones (pathetic online creatures that we all now are), put on our headlamps, and took off jogging toward the car. I still felt surprisingly good, but the fact that I had more trouble following the trail than I had on the way out suggested that fatigue was catching up. As always when returning from the Inyo crest, the descent dragged on longer than it seemed it should. I was feeling impatient toward the bottom, where the route crosses the wash and climbs around a constriction, and apparently so was Kim, who began jogging the downhills and even flats. I probably would have walked, as conditions were pleasant and I had plenty of food and water, but I gamely picked up my pace, and was glad to have someone younger and more motivated to push me a bit.

We returned to the car in about 15.5 hours, much better than the 20 I had feared, and I felt that we could have done more. After losing the road in the wash, we eventually followed the correct set of tire tracks, returning to my car in time for dinner and a full night’s sleep. I am not driven to additional super-long days in the Inyos, but there are many more potential routes, including other crossings and loops from either side. I look forward to seeing what others do.

Now we have to go back?!

Beveridge Ridge to the valley