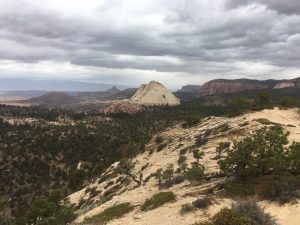 With only half a day before rain and snow would make the sandstone slick and fragile, I headed up Kolob Terrace Road to climb some short domes. I had been this way on my first scrambling trip to Zion, in 2013, to climb the Guardian Angels and Tabernacle Dome. This time I chose Pine Valley Peak, a short yet challenging scramble near the upper Subway trailhead, which I had skipped last time from a lack of confidence and/or motivation. I added Northgate West, an easier and more distant peak, because it had not yet started raining. 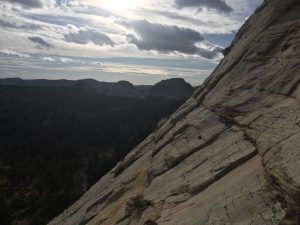 From the trailhead, I bushwhacked down a short basalt slope, crossed another trail from somewhere, and was almost immediately at the base of the climb. I spent awhile looking for the best line, which in retrospect was obvious: follow the big left-trending ramp until it ends, go up a crack, then… do sketchy stuff to get to the top. Mountain Project commenters mention going both left and right from where the crack ends; I chose the delicate traverse right, over to a broad, lower-angle depression leading to the summit plateau. 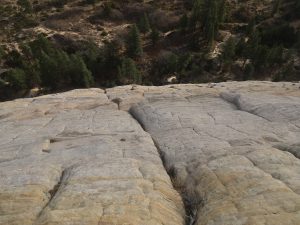 The ramp is easy. The crack, while steeper, at least feels secure, offering hand- and foot-jams, and the occasional bush, to help on steeper sections. I looked at various cracks left of the headwall above the main crack, but none looked particularly secure, particularly in the extremely soft white sandstone. The traverse right was airy, but careful route-finding and a good eye for subtle ledges kept it reasonable, and the slope beyond was lower-angle and offered a wandering series of ramps in most places. I watched the gathering clouds as I perused the summit register, then retraced my steps to the lower trail.

I followed this trail for awhile, then took off cross-country toward the Northgate Peaks where it turns to join the upper trail from the parking lot. My line crossed a couple of shallow canyons, made annoying by brush and loose rock; I suspect following the trail would have been faster had I been in a running mood. Northgate West, the higher of the two peaks, was a straightforward class 3 scramble. I eyed South Guardian Angel and the lower east peak from the summit, debating whether to climb the latter. It looked like I had enough time before the rain started, but I was not sufficiently motivated to tag the minor bump, so I returned to the trail and headed for the car. I passed several groups on the way, a mix of those out to look at the view and those headed for the Subway. I doubt the latter would be fun in the cold and rain, but it seemed unlikely there would be enough precipitation for it to flood. The parking lot was nearly full, with one commercial van and a number of “family-sized” SUVs. I drove down to a more solitary pullout, then made lunch as the storm arrived.