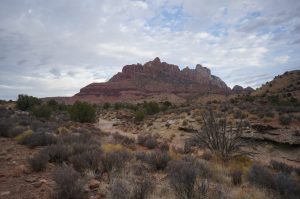 With only one full day of good weather left, it was time to tackle one of the longest and most technically difficult routes that had caught my attention in Zion: Cowboy Ridge to Mount Kinesava (5.7), followed by a traverse to West Temple (5.6). Going by the numbers, these are at the outer limit of what I will scramble, but the fact that the previous day’s outings had felt easy for their grades gave me confidence. However, I learned that while Zion’s slab routes feel easy to me, the 5.7 crack on Cowboy Ridge felt serious enough to merit its grade. Perhaps this is because slab climbing is more about confidence and careful foot placement, both exercised on easier terrain, while crack requires a specific technique that I rarely employ. 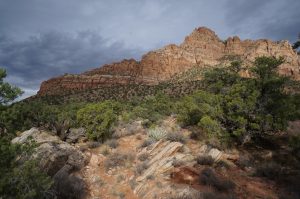 Cowboy Ridge from below

I woke up in the dark, giving myself plenty of time to stress about the news, catch up on writing, and chat with a friend who also could not sleep. Mike and I had used the Chinle Trailhead to climb Kinesava in 2017, so I knew where to find it at the base of an aggressively-signed Private Drive outside the park. I dithered a bit more, then hiked the trail through scattered mansionettes, following it a few hundred yards too far before reading the route description and bushwhacking back to the well-cairned wash. There is a trail up through the Wingate cliff-band, but it is not clear where it leaves the wash, so I just thrashed uphill at the obvious break near where the wash crosses under the power lines. From there, I meandered through sparse desert brush, finding sparse footprints on my way to the toe of the ridge. 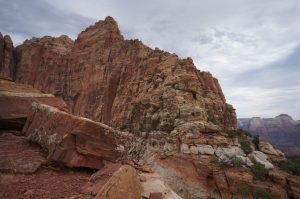 I started up near the superfluous cairn, probing and backtracking a bit as I accustomed myself to the terrain. The east-facing approach had been hot, but the changing weather was creating a stiff breeze across the ridge, making for comfortable scrambling temperatures. Having skimmed a few trip reports online, I knew to look right of the crest rather than staying religiously on top, so I moved quickly through the lower ridge by alternately traversing and climbing moderate corners. The route-finding became a bit less obvious as I neared the crux steps; a couple of times I started up something that felt “too hard,” backed off, and found another way with a bit of searching. By the easiest path, the climbing was no harder than class 3-4, and I was feeling confident as I approached the headwall. 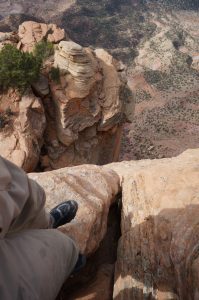 The first step clearly visible in profile is split by a wide sort of double-chimney, surmounted by some easy low fifth class climbing. The ridge remains slightly steeper above, but not difficult. The crux hand-crack is obvious and unavoidable: a uniform slot splitting the left side of a horizontally-ribbed headwall. Not having done any “real climbing” in awhile, I looked around a bit for an alternative, then reluctantly steeled myself to the inevitable. Done correctly, crack climbing is moderately painful and involves no loss of skin: you shove your hands into suitable parts of the slot, then squeeze them so they expand against the sides tightly enough to take your body weight without moving. Done my way, there will (usually) be blood: either I desperately shove a hand into a wrongly-shaped place, or I allow it to move around and remove skin. I did better than I had any right to expect given my lack of recent practice, but still flailed a bit pulling over a slight bulge. This forty feet felt 5.7 to me, considerably harder than anything else on the route. 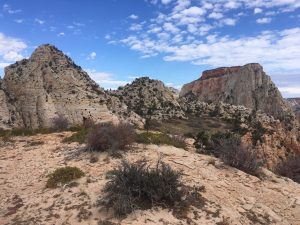 Above the hand crack, more easy scrambling led to the summit plateau, from which a bit more class 3-4 slab climbing got me to the top. Since Kinesava has an easier route, it is relatively popular, and the register did not go back far enough to include our 2016 summit. I sat around until the wind chilled me, then headed toward the standard descent before continuing past to begin the traverse to West Temple. I thought this would be easy, but it proved to require the day’s trickiest route-finding to keep the climbing low fifth class. I first tried the left-hand side of the ridge, finding nothing I liked, then tried a couple of lines on the right. I eventually dropped down a sandy gully, traversed, then climbed back up through a notch to reach the lower left side, from which I was finally able to reach the saddle. 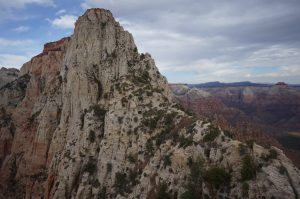 West Temple from beyond notch

From there, the route wanders to either side of the ridge, generally staying close to the crest, with unhelpful cairns scattered at random points. Parts are narrow, but none of it felt particularly exposed. Near the striking white headwall, a step with a finger-crack stymied me, just a bit too high, with feet a bit to thin. With the aid of a tree, I made some sketchy moves onto outward-sloping gritty slabs on the left, then cautiously returned to the top, only to spot an easier gully a bit farther on, which I noted for the descent. The crux is the last short pitch leading to the sub-summit plateau, the rightmost line among several corners through splitting the white headwall. Several bolts, and a two-bolt anchor, clearly indicated where I was supposed to climb. Above some scrappiness involving a bush, the hardest move involved working one’s hands and feet up the corner of a dihedral, then getting high enough to transition to some combination of hand- and foot-holds above and to the sides. After a couple of tentative tries, I figured out the correct sequence and position, passed the anchor, and bashed through yet another bush to reach the top. 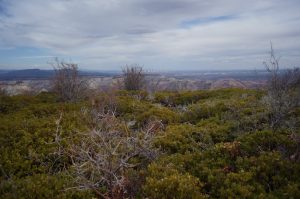 The actual summit is a blob of red sandstone sitting above the Temple’s white bulk, with a wide, easy break on its left side. Unlike on Ares Butte, there are no sheep to mow the brush — who knew they couldn’t stem? — but the manzanita and oak on this part were manageable. I hiked the plateau, slogged a faint trail up the break in the red cliffs, and was immediately confronted by manzanita hell. Some other part of the plateau might be slightly higher, but I decided to consider this the summit. I thrashed over toward the antennas, crossing a blank spot where helicopters may land, hoping to get a view down to the east. This quickly stopped feeling worth the effort, so I thrashed back the way I had come, accidentally finding the register only a few feet from where I had topped out. West Temple is quite a bit more work than Kinesava, so the entries went back a couple of decades, a mixture of fellow scramblers (hi, Buzz and Jared!) and Real Climbers doing Hard Things.

Fortunately nothing on the ridge felt any harder going down than up, and there were even helpful and frequent cairns showing the way from the notch to lower-angle terrain below Kinesava. I picked up the moderately well-used trail through the Wingate this time, lost it again farther down, then continued haphazardly toward the wash, using a particularly gaudy mansionette as my lodestar. Once in the sandy bottom, I turned on a podcast, tuned out, and had an easy hike back to the car. The forecast called for only another half-day of good weather, so I headed toward Kolob Terrace Road in search of shorter peaks.

Cowboy Ridge from below

Cowboy from the top

West Temple from beyond notch