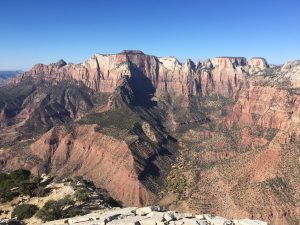 [Too late, I realized I had left my camera in “star photography mode,” so the photos are messed up.]

I had been to Zion several times, though only once to scramble, tagging the Guardian Angels on a brief visit in 2013. After Buzz expressed surprise in our interview that I had not spent more time there, I asked for some recommendations, and made plans to spend more time there. Further poking around on Mountain Project showed that there are a wealth of low-fifth-class routes in the area. The sandstone is not as pleasant as that in nearby Red Rocks, being more fragile and grittier, and normally lacking Red Rocks’ amazing black varnish. However, as an experienced chossineer, I took this as just another type of bad rock to be understood. 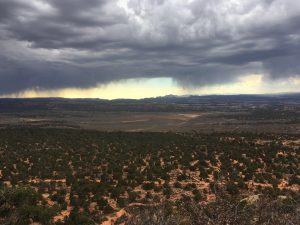 I ran into some distractions along the way. After hiking Buckskin Gulch, I learned that it had a well-established FKT, going back years and originall held by Buzz Burrell and Peter Bakwin. The current record, held by a local female athlete, seemed intimidatingly fast, but I thought I might still be able to beat it. If not, at least I could take advantage of my gender to claim the slower men’s FKT. As it turned out, I was able to best her time by all of two minutes, thanks to the canyon being so dry this late in the season. Buckskin turned out to be fun to run, with long stretches of smooth sand and a gentle, consistent downhill grade, but it is not possible to do so while taking in the scenery. I also visited the White Canyon Slot, covered in solidified mud drips, foolishly tried to ride on the Paria Plateau, where all the roads are tire-sucking sand, and met some interesting people, at least one of whom I will probably see again. There is clearly more to do in the area and, since it is BLM land, few crowds or rules. 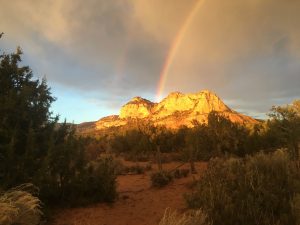 But on to Zion… I had not done any hard scrambling in awhile, and it had rained the previous afternoon, so I began with one of the easier routes on my list, the 5.easy southeast face of Bridge Mountain. I camped outside the park, then drove in early to put off buying my annual pass. This proved fortunate, since “construction” (actually a fence with no work going on behind it) had limited the downhill parking for Gifford Wash to three spots. These are normally used by tourists taking a short walk to a viewpoint, but I gloatingly occupied one for the entire day.

After a bit of trickiness getting into the wash, I spent some time slogging up deep sand, made only slightly firmer by the previous day’s rain. Most horizontal surfaces in Zion are covered with evil oakbrush, so routes tend to involve either scrambling or following watercourses. The terrain can be confusing, with lots of similar domes and washes, and spiteful, with surprise cliffs and dryfalls blocking otherwise-easy routes. Also, routes are mostly on slickrock or sand, where use trails do not form; elsewhere, they can often be tough to distinguish from game trails. Fortunately I had both a good approach description from Mountain Project, and the topos on my phone.

I left the wash a bit too early, then regained the path at some cairns below a crucial slot leading into the bowl below Gifford. From there, I dropped into the wash to its north, which was easy going after a long detour around a dryfall near the top. The east-west wash to the south, which eventually plummets over the long tunnel, was mostly open sand, and I was soon rounding the corner toward Bridge and G2. This wash was slightly more annoying, occasionally choked with brush, but I was close to my peak, and the ramp up Bridge was obvious.

This was a good introduction to Zion scrambling, as I learned to identify the angle at which my shoes would stick, and to avoid surface grit and things that would crumble. There were a couple of class 4-5 moves, but it was mostly a slab-walk, requiring only trust in friction. The ramp fades away as it turns the corner and climbs into the upper mountain’s white rock. I thrashed through some pine and manzanita in a corner, then reached the ledge that cuts back left to the apparent crux. The traverse to the slung tree required a bit of confidence and caerful foot-placement. Beyond, there were several options; I took a more direct line on the way up, then found an easier, wander-y path on the way down. I was getting better at cleverly linking ledges and seams to avoid attacking the sandstone slabs directly.

Above the short crux section, a lot of wandering hiking and scrambling eventually leads to the top, with no single best path most of the time. The summit, being on the edge of the main canyon, has a striking view of Kinesava and West Temple across the way, and Angel’s Landing and the other features of the upper canyon to their right. I could also see the crowded visitor center parking below, and a line of cars backed up above the tunnel so an RV could pass through, and hear the traffic noise. All too soon, I would have to face that madness.

Like many Zion scrambles, Bridge does not have an easier walkoff, so one must either downclimb or rappel the route. I (of course) chose the former, and mostly found it low-stress; the part above the slung tree can be made easier by following features a bit farther south. With plenty of day left, I continued to neighboring G2, wondering all the while about its name. I doubt it looks like Gasherbrum II, and it is not along Gifford (Cathy Lee? Mr. Pinchot?) Wash. In any case, it is an easy scramble from the head of the gully south of Bridge: although both are supposedly rated 5.easy, G2 is definitely 5.easier. It also had a register, with a few familiar names from Colorado.

Rather than trying my luck with shortcuts, I retraced my route to the main north-south drainage, continuing up to the ravine north of Gifford. I was low on food, but long on daylight, so I decided to extend the day by looping over Roof, Hepworth, and Gifford Peaks. This would involve some unknown terrain, but all the peaks were short, and the terrain looked okay according to my cursory glance at the topo. I continued up the wash to a divide west of Hepworth, staying in the streambed and only occasionally having to fight through oakbrush. Unfortunately, my relaxing afternoon stroll ended there: the wash between Gifford and Hepworth ends in a dryfall, Hepworth’s west side is rather cliffy, and the drainage south of the divide appears to turn into a slot canyon.

I wasn’t ready to admit defeat. Instead, I sat in the shade and dithered for awhile, eventually spying a line that might take me up the base of Hepworth, then around a corner into the bowl between it an Roof. It looked steep, but things always look steeper than they are when viewed head-on. My line eventually worked, but it involved some backtracking, gritty traversing, vegetable holds, and one broken foothold. That unpleasantness out of the way, I continued up the bowl to Roof’s west ridge, then scrambled its summit “pancake stack.” Since all three peaks are topped by layered, soft sandstone, all feature such summit blocks.

Hepworth was an easy hike from Roof, retracing my steps a bit, then crossing the saddle and heading up its south side more or less straight for the summit. Though both sides look the same on the topo, its north side is too steep to easily downclimb. Fortunately I was able to follow its east ridge until I could traverse back onto the lower, less steep part. Gifford was not particularly hard, but all routes to the summit seem to be class 3-4 thanks to awkward bulges and steep sections. I went up the southeast side, then descended what seemed to be the standard route — it had cairns, but also involved a downclimb onto a rotting log. I was surprised and pleased to find Honnold and McCandless in the register from not too long ago. I suppose they are locals, but it seemed like both an odd peak and time of year to find famous people.

I hiked down Gifford to the plateau, then mostly retraced my route to the car, though I dropped to the wash higher up. The scene at the road was classic Zion: the ranger was talking to some people in a rented RV while waiting for the tunnel to clear, cars were stacking up behind the RV, drivers were jockeying for the handful of parking spots, and tourists in impractical clothes were milling around on the sidewalk, visiting the overlook, taking photos, or looking bored. Someone else was glad to take my parking spot, and I was glad to get out of there, leave the park, and camp on a quiet BLM road.