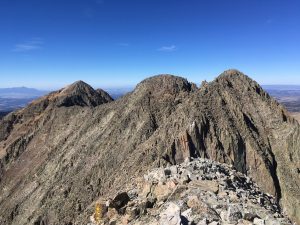 Babcock was my last remaining thirteener in the La Platas, a small and obscure range west of Durango. I had visited twice previously, once in 2016 for Sharkstooth and Centennial, and again in 2017 to get to thirteeners Moss, Lavender, and Hesperus from Tomahawk Basin. I did not know much about Babcock, but read somewhere that it is connected to neighboring Spiller (unranked) by a scrambly ridge called “the knife.” That sounded fun, and I needed a place to camp near Durango, so I decided to drive over to the La Platas and check it out. 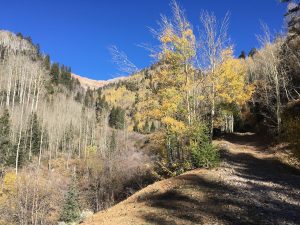 I normally avoid developed campgrounds, but there are many summer homes along the La Plata River, as well as signs admonishing people to camp in developed areas. There are several developed campgrounds along the river, which seem to be free this time of year, so I pulled into the one near the semi-ghost town of La Plata. There were a couple of other groups there, but plenty of room to spread out, so I took a nice spot along the river and settled in for the evening. Just before dark, a pair of tricked-out Sprinters with California plates pulled into the next spot. It seems like I was not the only refugee from the smoke and coronavirus (at least I have better camouflage), though I was surprised to find others in this obscure corner. 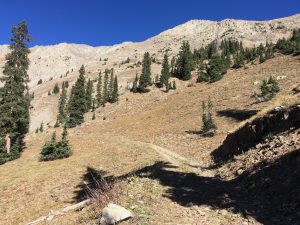 Babcock and Spiller from near mine

It was cold and shady in the La Plata so late in the year, so I took my time getting started, hiking the main road a short distance to Boren Gulch. Here there is a 4WD road to a mine around 11,200′, which still sees occasional use by ATVs and a truck or two. It is steep and direct enough to be an enjoyable hike, climbing through aspens along a cascade toward the colorful choss of Spiller and Burwell. The road ends at a small mine, from which a steep slope leads toward Babcock. 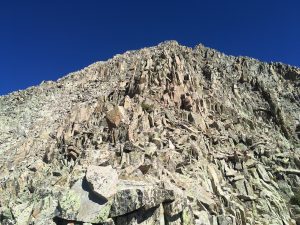 Babcock’s south side starts off as easy grass and talus, then becomes unpleasantly loose. I painfully struggled up and right, linking shallow gullies and patches of grass for a bit of stability. The occasional rock outcrops on the slope are rotten, but better than the scree, so I found a bit of class 3 amusement as I got higher. A few hundred feet below the summit, I finally reached an indistinct south ridge, which offered some slightly more fun and solid third class climbing on the way to the peak. 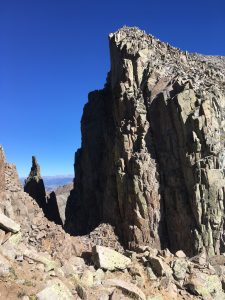 Reaching the “summit,” I realized that although both the Forest Service and Peakbagger call this the highpoint, Babcock has three summits, and the others are higher. It seemed I would have a bit more hiking and scrambling to do, and perhaps not continue as far south along the ridge as I had hoped. Little did I know… this is what happens sometimes when you don’t read the instructions. The north side of the ridge is steep and jagged, while the south has numerous fins and gullies. The three main summits are separated by steep clefts, with cliff-sided gullies extending far down to either side. I downclimbed into the first gap on class 3 terrain near the ridge, then out the other side on some class 4 on the north side. Pleased with myself, I continued along easy terrain on the south side, only to find another, more serious-looking notch between me and my desire. 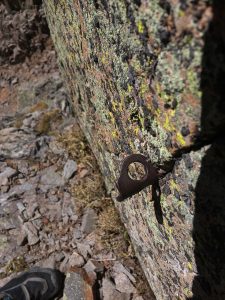 I wasted an incredible amount of time here. First I tried a downclimb just left of the ridge, where I passed a couple pieces of rap-tat before getting sketched out by the low-fifth downclimb on rotten rock in a gully and corner. I tried a few options toward the bottom, one time making it to within fifteen feet of the ground, but could find nothing that felt comfortable. I retreated, then tried the next gully south, making less progress, but at least wasting less time, before once again being stymied. I made a final attempt on the north side of the ridge, but the rock was even worse there, and it was too cold to spend much time exploring. 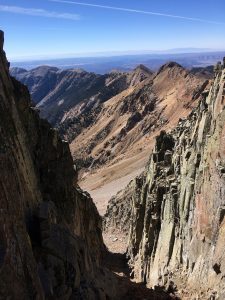 I finally gave up, retreating to the first notch and descending its incredibly loose gully to the south to where it joined the next gully to the west, then chossing up that until I could get on better rock to its left. Ugh. Compared to what I had just endured, the scrambling along the ridge between Middle and West Babcocks was tame, though I did find a rap anchor along the way. I eventually reached West Babcock, where the rock slightly improved, the climbing eased, and I could begin my intended traverse. 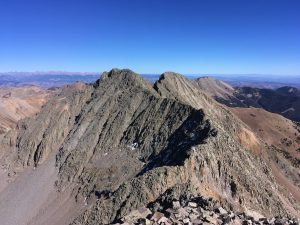 The rock is sometimes not great, but “the knife” is actually fun, with some good sidewalk sections, and some scrambling in between that never becomes tedious. I found a bit of fourth class getting out of a couple of notches, but this can probably be avoided by straying farther from the crest. The views north to striped Hesperus, and behind along the jagged ridge to the Babcocks, are interesting enough to occupy the mind. Reaching Spiller, I found a register book in a cracked blue thermos, signed mostly by people who had done the knife, but had also known beforehand which Babcock was highest. 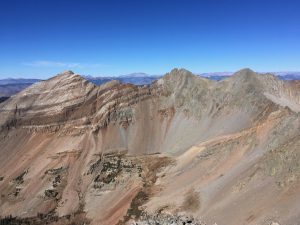 Hesperus and friends from Spiller

There are mine roads up all the drainages west of the La Plata, and I had hoped to continue all the way to Madden or Parrott before dropping down to one and looping down to the main road south of camp. Unfortunately the ridge wasn’t quite done with me. There is a bit of a use trail down Spiller’s south ridge toward Gibbs, but no clear way back into Boren Creek. Perhaps the trail heads west into Rush Basin, where an apparently well-used road leads to some mines and ruins. There were a few choss-pinnacles along this section, but no major difficulties. 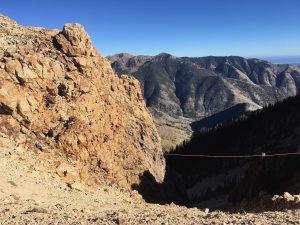 Wire on the way to Gibbs

I could see mine roads leading far up Gibbs’ east ridge so I decided to continue there before heading down. The ridge south from Burwell starts off easy, then turns steeper before reaching the first broad saddle. Beyond, things turn horrible, with two deep, vertical gashes in the ridge, which I eventually bypassed on horribly loose talus to the west. The knife seems to be the only good bit of ridge in the whole area. Once past the gaps and back on the ridge, I found easier terrain and some colorful wires, along with a faint trail leading to Gibbs’ summit.

The whole ordeal had taken much longer than anticipated, so I barely paused before returning slightly to the east ridge, where I found bits of flagging and a use trail leading down to the mine roads. From there I followed the most-traveled branch, which switchbacks gently into Bedrock Creek, where it passes a couple of summer homes on its way to the main road. I finally reached my campground around dinner, far later than I had expected and with less accomplished, and decided to stay in the quiet valley for another night.

Babcock and Spiller from near mine

Ridge I planned to traverse

Hesperus and friends from Spiller

Wire on the way to Gibbs 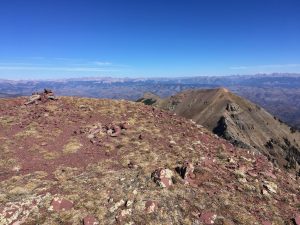 These are two twelvers at the head of the La Plata river, with a mine road leading to the saddle between them around 12,000′. I hadn’t ridden in awhile, so they looked like a fun half-day to make the drive out to the La Plata campground worthwhile. I met one Jeep near the crest, and a bunch of mountain bikers at the Indian Ridge trailhead, but it was quiet otherwise. I was pleased to note in Cumberland’s register that the Climbing Cooneys are still getting out. 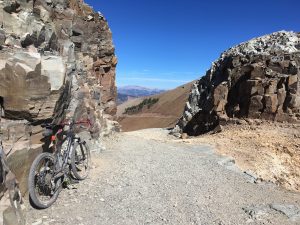 The road was too steep and rocky in places to be rideable by me on my touring bike, but mostly good. I stopped to look at some large mining equipment in the basin at the Cumberland Mill ruins, then continued toward what looks like a pass between the two peaks. It actually turns out to be a gap blasted in the ridge, with the road continuing to the Bessie G Mine on the other side, then weirdly wrapping around to cross back over into Columbus Basin. The actual pass is to the north, where the Colorado trail crosses over Kennebeck Pass on its way to Durango. I had no idea that the CT, which descends Elk Creek and climbs to Molas Lake, extended this far west; I suppose this helps explain its greater-than-expected length. 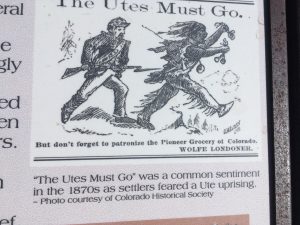 I stashed my bike at the gap, then hiked down the mine road until I could scramble up the steep, grassy slope to the ridge. From there, I fought a strong west wind to Snowstorm’s summit. Lewis Mountain to its south is notably higher and more massive; I would have climbed it if I had planned ahead, but I was just out for exercise. I retraced my steps to my bike, rode a short distance down the road, then took off on a nearly identical hike, scrambling up a steep grass slope to a windy ridge, and thence to a minor summit. This one at least had a nice windbreak, where I was able to eat and peruse the register.

Afterwards, I returned to my bike, then passed a bunch of mountain bikers on my way past the Kennebeck Pass trailhead. Apparently the Colorado and possibly Indian Ridge trails here are open to mountain bikes, and quite popular. At least, a group of guys had found it worthwhile to drive over an hour from Durango, including some semi-rough driving up through Cumberland Basin, to ride here. Back at the town of La Plata, I rinsed off my feet, packed up camp, and headed back into town to resupply before heading back to the San Juans.

Cumberland and Snowstorm from mine