Panorama of all peaks

The two Storms and Tower are ranked thirteeners near Silverton, and Macomber is more or less the end of Tower’s southeast ridge. Doing them would take me up Boulder Creek, new terrain to me, and put a dent in the group of high peaks northwest of Silverton. Other than downloading the topo, I had done nothing to research these peaks, assuming as usual that “it’s just Colorado.” It almost bit me this time, as the ridge connecting the two Storms is unusually narrow and difficult for this part of the San Juans. Though I eventually figured it out, it took longer than expected, and required maximum effort in the chossineering department. 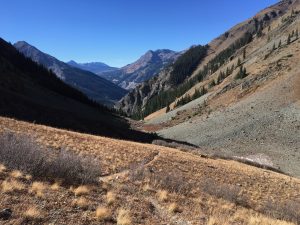 The mouth of Boulder Creek is a pair of old tailings piles covered in disused and sometimes gated roads, and ambiguous “POSTED: NO TRESPASSING” signs. It is critical that they be “posted,” but apparently irrelevant which areas of dirt are off-limits. In this case, someone probably doesn’t want you to walk on the ancient tailings piles, but doesn’t care if you wander through the mess of eroding dirt roads to find the trail. I learned by trial and (mostly) error that the third one up the slope is the correct road, then picked up the trail. 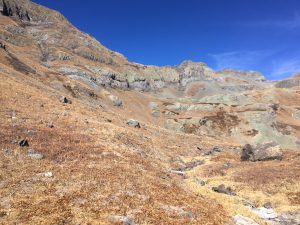 This is an admirably direct trail, climbing steeply up the right side of the gulch with no more than a few switchbacks. Other than where it crosses a rockslide lower down, it is also mostly smooth and runnable. I even saw mountain bike tracks, though it seems too steep to climb, and I would have no fun descending it. Where the trail crosses the creek and jogs left, I turned off to the south, entering the valley below Storm and East Storm. There is a mine shaft and tailings pile here; there seems to be at least one in almost every little valley around Silverton. 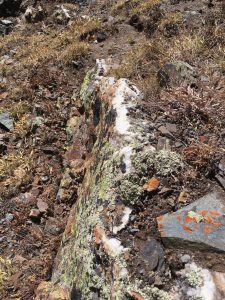 The ridge between the Storms looked increasingly problematic, steep on this side, with numerous pinnacles and a vertical-looking step just east of the saddle. Hoping that its other side was gentler, I headed up the slope to the left, aiming to gain Storm’s southeast ridge. This looked steep on the topo, but was mostly the nice steep Colorado turf to which I had become accustomed. I stumbled onto one short section of kitty-litter, and found a bit of class 3, but the former was an unforced error, and the latter a deliberate bit of whimsy. I also noticed an interesting seam in the rock, where crystals had formed on both sides like the inside of a geode. 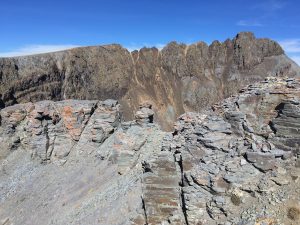 Choss and final scramble to Storm

Things briefly became interesting on the ridge, as I worked my way left of a vertical step, then wove over and around some choss mushrooms. Once I joined the south ridge, it was easy grass to just before the summit. The grass ended abruptly, with the last bit involving some easy third class scrambling over several minor towers to reach the highest. The rock was both rotten and covered in debris, making me slow and cautious, and increasingly uncertain about what lay ahead. From the top, I could see several of the valleys east of the Animas, each with its own road, including the road to Stony Pass. To the other side, I looked at the other side of the colorful mountains for which Red Mountain Pass is named, and a substantial mining operation at their base. I could also make out the switchbacks of Engineer Pass at the northern end of the valley. The other side of the ridge was just as steep and chossy as the one I had seen on my approach, but much higher; things were going to get interesting. 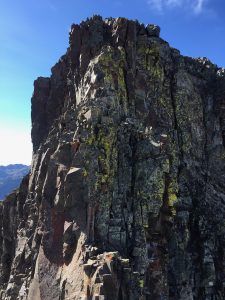 I traversed over to the next sub-summit along the ridge crest, which was shockingly narrow in places. At one point it consisted of a microwave-size boulder with a hole beneath it, which I stepped on gently and quickly. The rock was treacherously sharp: I scraped my thigh through my pants, and managed to sever my headphone cord on another edge. (This is why I only buy cheap earbuds.) The terrain was engaging enough that I did not miss the music. After a section of steep downclimbing, the rock changed from black to gray, and became less sheer. I followed the ridge for awhile, then dropped down a gully to the right when it appeared to cliff out just before the saddle. Returning briefly to the crest, I found a pile of bamboo poles and a “ski area boundary” sign; this perplexed me, since I saw no lifts, and there was only one obvious direction to ski. I traversed around another annoying tower on the right, on heinously rotten red rock, then found myself at the base of the step that had concerned me on the approach. 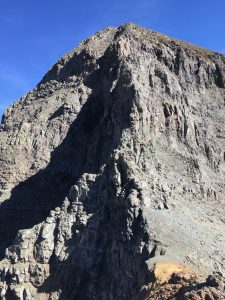 I examined a dihedral on the ridge, but it looked like nothing I wanted to climb. The left side looked steep and extremely rotten, in addition to being in the shade. To the right, it looked like I could traverse a bit, then cut back up a gully to the crest. This worked as planned, and though obnoxiously loose in places, it was no harder than class 4. Back on the crest, I saw that I still had another step to avoid. This time I went left, making a short, sketchy downclimb into a class 3 gully, which led back to the ridge above the difficulties. From there it was a straightforward scramble to the summit. 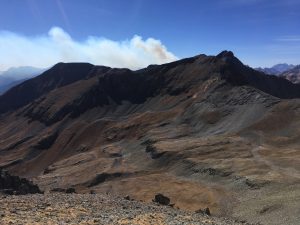 Finally looking behind me for the first time in awhile, I was surprised to see a brown plume rising west of Silverton. I watched the fire develop for the rest of the climb, eventually determining that it was in South Mineral Creek near the Ice Lakes trailhead. I later learned that this was the Ice Fire, and several hikers and a dog had to be helicoptered out of Ice Lakes Basin. Though firefighters would jump on it quickly and keep it from growing too large, I took it as a sign that I should perhaps move on. 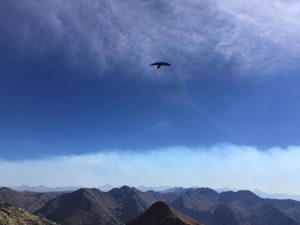 I had hoped that it would be easy grass to Tower, but there was a bit more choss to contend with. That out of the way, I circled around the basin, crossing the Boulder Creek trail and picking up the faint use trail to Tower. I enjoyed the easy walk, blasting music as loud as my phone’s sorry speakers could manage (not very) and looking down into the deep South Fork of the Animas to the left. It seems that Tower is named for the radio tower on its summit. I found no register, and felt no reason to hang around the equipment. 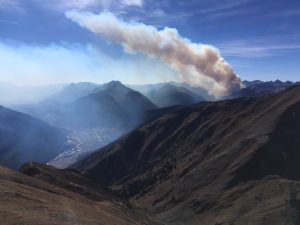 I planned to continue along the ridge until I had a clear shot on grass back to the creek. As I traversed, a raven checked me out while gliding on the ridgetop wind. I tried to “talk” to it, but it never responded, though it did follow me for quite awhile. Looking at Peakbagger, I realized that the end of the ridge was Macomber Peak, an unranked thirteener. It was right along the way, and hardly any more work, so I decided to tag it and descend from there. I watched the smoke cloud evolve as I hiked the ridge, casting an orange shadow over Silverton.

The descent to the trail was easy but annoying, a mixture of slick grass and small rocks that would unpredictably roll. At least it was direct. Finally back at the trail, I jogged down toward the trailhead, entering the smoke shadow in the lower gulch. I drove into town, hoping to wash up at the public restroom, but it was apparently closed for the season. I picked up a couple of things at the overpriced grocery store, used the Visitor Center WiFi for the last time, then got out of town.

Panorama of all peaks

Choss and final scramble to Storm