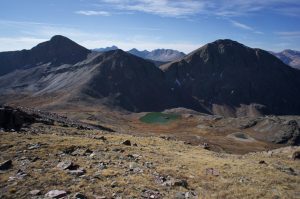 Camping is best when you can carry all the heavy stuff to one place, leave it there, and go on day trips, returning to the pile of bedding and food each evening. When that is not possible, it is better to pack up camp during the warm part of the day. Unfortunately this was the last day of our backpack, and we had quite a bit of ground to cover, so neither was possible. Instead, we set our alarms for 6:00, ate in the dark, packed up in the cold, and started hiking with full packs around dawn. 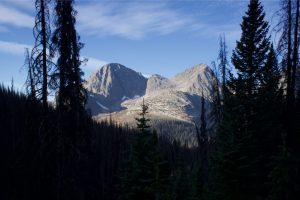 The Guardian and Silex

Mount Nebo is one of a group of four thirteeners southeast of Hunchback Pass. While they are a comfortable day from Beartown, and a reasonable side-trip on the way out from our camp, they would be painfully difficult to reach from a two-wheel-drive trailhead. This was their main draw to me, as my most likely access to a capable off-road vehicle in Colorado (a.k.a. Dan) was ending. He seemed fine going along for the peaks, as it would mean that he, too, had cleaned out the area’s thirteeners. While many people reach other peaks such as the eastern Grenadiers this way, they are accessible from Molas or Vallecito with only a bit more work. 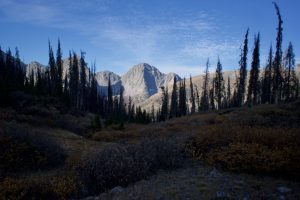 We slowly ground out much of the long climb to Hunchback Pass with our overnight packs, then stashed gear at the intersection with the Nebo Creek trail. This also happens to be the Continental Divide Trail, but it is blocked by a large tree right at the junction, and shows less signs of traffic than the trail down to the Vallecito. I seem to be in the area at the wrong time of year to encounter either north- or south-bound CDTers, but it seems clear that they are far less numerous than the hordes of PCTers I saw around Ebbetts Pass this summer. 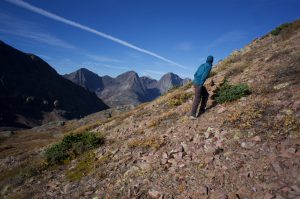 Despite its being mid-October of a dry year, the creek was flowing well far above obvious water sources like lakes and permanent snowfields, yet another testament to the San Juans’ mysterious water storage capacity. Our target peaks were arranged somewhat awkwardly: one north of a high trail pass, Nebo and its neighbor south of the pass, and the last a few miles southeast along the trail. We dropped packs to tag the first, then took the trail out to the last before returning for the last two. This maximized our chances of not skipping any, by getting the easiest done first, then committing ourselves to doing the most remote one. 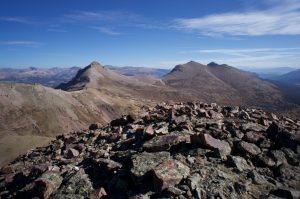 The first peak was an unremarkable walk, but at least it had good views of Ute Ridge back near the trailhead, and the northern side of the Eastern Grenadiers. The Guardian, Silex, and Storm King all have impressive north faces, with Storm King in particular having an interesting-looking northeast ridge, which Dan had climbed back when he lived out here. I would be more interested in exploring these routes out of Stormy Gulch if it weren’t so difficult to reach in a day. The summit also had a view of our next peak, discouragingly far in the wrong direction. Back to work… 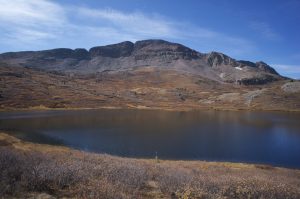 We returned to our packs, then took off across the head of the West Ute Creek drainage to a large lake. This would be our last water source for awhile, so we both tanked up despite the faint notes of algae. We were only separated from Rio Grande Pyramid by one drainage at this point, and with the area’s extensive trail network, it seemed very close indeed. Leaving the trail shortly past the lake, we took off up game trails and cross-country to our peak’s east ridge, finding steep but mostly easy terrain. 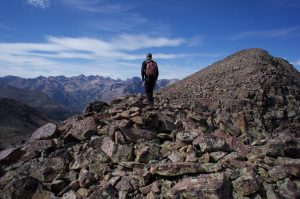 The ridge, on the other hand, was mostly a medley of unstable rocks. To the south, a ridge of nice slabs is rising and shaking off (in geological time) the overlaid volcanic garbage, but this thirteener is a pile of loose junk. We stayed close to the crest, finding a bit of class 3 scrambling getting into and out of the notches visible from below, but mostly just suffered, and I questioned my sanity for bringing this upon myself. I am close to finishing the 80-some Weminuche thirteeners, and about halfway through the San Juans’ 260-some; even as a lifetime goal, it’s hard to imagine doing all of Colorado’s 600-ish peaks over 13,000 feet. The rock’s color changed at the summit, but it remained loose on the descent to a sort of plateau. Where the ridge turns slightly south toward the Grenadiers, we dropped down a loose chute, crossed a low saddle, then made a beeline for the next peak. It felt good to be heading back toward our stashed gear, and the almost thousand-foot climb went by fairly painlessly. 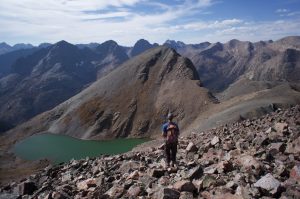 Getting down to the saddle with Nebo required side-hilling across some of the day’s loosest terrain, aiming horizontally to make a sliding, descending traverse. Along the way we crossed a layer of clinking, smooth, dinner-plate rock, possibly slate, and took a couple pieces to eat from later. Tired of the loose stuff, I stayed close to Nebo’s sheer north face on the climb from the saddle, while Dan found his own way up some nasty-looking chute to the left. The summit had the expected Grenadier view across the valley, but it was chilly and we had miles to go, so we soon made our way back down our respective routes. 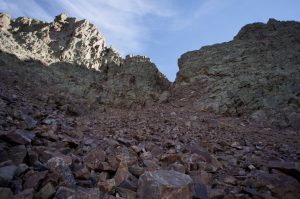 The north side of Nebo and its neighbor is mostly rotten cliffs, so getting back to the trail is actually a bit tricky. I had noticed a notch leading to a steep, rotten chute near the saddle, which seemed to be the best option. The chute proved every bit as loose as anticipated, so we each picked a side and descended together, gleefully raining death on anything below. Once across the talus-fan at the base of the face, we were done with choss for the day, weaving through a few willows to pick up the CDT and return to our gear. From there it was a short but “backpacking speed” climb to Hunchback Pass, then a faster hike down to the trailhead and Dan’s car, again finishing just at dusk.

While Dan dealt with dinner, I went over to the closest flat spot to set up my tent. This would be the coldest night of the trip for me, camping at around 11,000 feet at the bottom of a valley between two streams. It was also Friday night, and the ATVs were out in force. One guy on a quad stopped to warn us, in a familiar northern New Mexico (southern Colorado in this case) Hispanic accent that this was opening weekend of rifle (i.e. “anything goes”) season for elk, and that his party was planning to hunt near where we hoped to hike. It had been some form of hunting season for awhile, but I don’t worry much during bow season (September), since there are few bow hunters, and they have to be both dedicated to the sport, and very close to their quarry to take an effective shot. However many more people have rifles, and someone with a high-powered rifle and telescopic sight can shoot from hundreds of yards away. I hoped my red buff and faded orange hat would be defense enough, since most of my other clothes are either black or elk-colored.

The Guardian and Silex