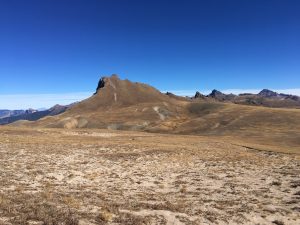 [This is out of order, but the backpack will get caught up soon. — ed.] 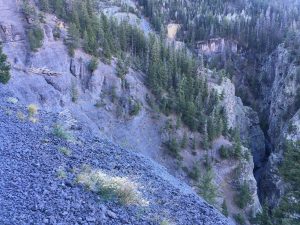 Wildhorse, Dragonsback, and Blackwall are three peaks on the northern end of the highlands between Ouray and Silverton, bounded by the Animas and Uncompahgre Rivers, and Mineral and Cow Creeks. They are all impressively cliffy from the Cimmarons to their north, piquing my interest a couple weeks earlier. Most people probably climb them from a friend’s Jeep at Engineer Pass, but with Dan departed into the west, I would have to do things the hard way. This actually turns out to be a blessing in disguise, since the most direct approach on foot is via Bear Creek, the area’s best and craziest trail. Starting just above Ouray, it crosses Highway 550 on a rock arch, then climbs through a narrow canyon, with sections blasted into the cliffs high above the stream, reminiscent of the road to Yankee Boy Basin.

For reasons that remain unclear to me, I had slept near the summit of Red Mountain Pass. I woke well before dawn, drank coffee and worked on my laptop by headlamp, then scraped the frost off the inside of my windshield to drive down to Ouray and poach WiFi. Mint has much better cell coverage than the pathetic Boost Mobile, but it apparently does not include Ouray. Experiences like this make me shake my head at the recent hoopla around 5G: I suspect that millimeter-wave 5G (the actually fast kind) will be relevant to my life about the same time I own a battery-electric car, i.e. sometime around 2030. 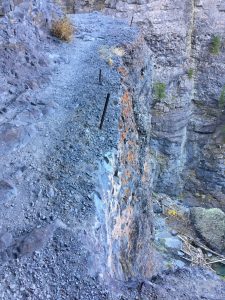 It was cold, and I was headed up a west-facing canyon, so I felt no need for an alpine start. Still, I got going around 8:00 (soon to be 7:00 once Daylight Savings belatedly ends), setting a moderately hard pace to stay warm. The trail switchbacks up the hillside north of Bear Creek, then traverses a steep gravel ledge into the slot canyon. When this ledge gives out, the trail is blasted into the wall, forming almost a half-tunnel in a couple of places. A couple of short stretches are decaying, but most of the trail remains in good shape despite the Forest Service likely having neither the budget nor the skill to rebuild it. 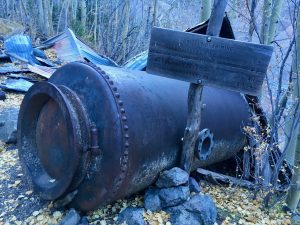 Passing the Grizzly Bear Mine, I saw the large boiler I remembered from my last trip this way, decades ago on a family hike. The valley opens up after this, and the trail passes through woods and aspens, their leaves long since fallen, to reach another mine, this one with a larger cabin and more rusting machinery. Here the trail splits, with the more popular branch continuing to Engineer Pass. I took the less-traveled path, heading northeast to reach American Flat and the Horsethief Trail. This looks like another interesting route, climbing a ridge from near Ouray and crossing something called the “Bridge of Heaven;” I added it to my to-do list. 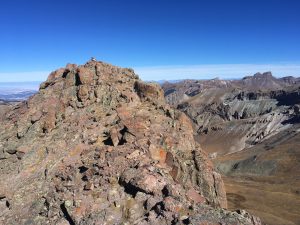 Wildhorse is obvious as soon as one emerges onto the flat, with its jagged skyline and steep but grassy south face sticking out from the rolling plateau. Dragonsback is somewhat hidden, but more distinctive, a volcanic fin with no easy slope to its summit. Though the map shows multiple trails and even a road in the area, they have been mostly reclaimed by grass, leaving only lines of posts propped up by rocks to follow. I followed one such for awhile, then took off straight toward Wildhorse, jogging carefully across the uneven ground. 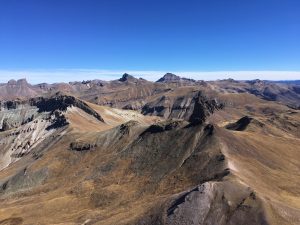 Other than a sort-of catwalk out to the summit, Wildhorse is almost all walking on steep grass. I didn’t feel like putting in a race-level effort on the climb, but still made a decent effort. The easiest route strays toward the north face and east ridge near the top, where there are some cliffs and pinnacles to admire from a safe distance. From the summit, I could clearly make out numerous fourteeners, including the Sneffels group, Uncompahgre and Wetterhorn, Sunshine and Redcloud, and the distant Needles to the south. I could also pick up cell service from Ridgway or Montrose, allowing me to resume my tradition of summit texting.

I retraced my route for a bit, then contoured around north, trying to cut the corner on my way to Dragonsback. For some reason this slope had not only a fair number of game trails, but a ridiculous amount of poop, giving it a faint unpleasant smell. I have no idea why the elk, sheep, or whatever chose to hang out at this particular location. I continued along the southeast side of a grassy ridge avoiding a bump, then came at Dragonsback directly from the southeast. Dan had drawn a vague line on this side of the peak, it seemed the most likely to be climbable, and besides… “it’s just Colorado.” 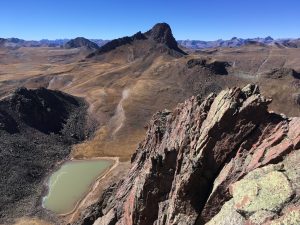 Looking at this side of the peak for a minute, I noticed two grass/dirt slopes, one nearly below the summit, and the other somewhat to the right. The right one looked more promising, and the upper peak seemed broken enough that it should be possible to weave through the gullies and pinnacles, eventually emerging on the summit ridge as close as possible to the true summit. This exact approach worked, with almost no backtracking; I even found a few cairns, suggesting that I was near the standard route. I found two fourth class sections, one getting into the final gully, and the other leading up one of two corners to the summit. There was a large piece of rope serving as a rap anchor above the second, which I would have removed if it were less bulky. 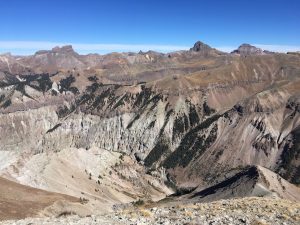 I retraced my somewhat convoluted route down Dragonsback, then circled around south before dropping toward Blackwall. I dropped enough to get around a large talus fan, then had an easy walk up another grass slope to the summit. Part of the attraction of visiting Blackwall is its view into Cow Creek, a deep valley separating the Cimmarons from the main body of the San Juans. Though the summit is somewhat back from the edge, I was still able to see down into part of the canyon, and to admire the hoodoos therein.

I had briefly contemplated doing a few more thirteeners south of my approach, but I was low on food, and preferred to save my energy for the run down. After a long tundra traverse, I started the long jog down Bear Creek. I wanted to make decent time, but between fatigue, wearing a pack, and stopping to take photos, I only managed moderately respectable speed. Looking on Strava later, I saw that there are plenty of fast people in the area, and I was nowhere near their times in either direction. Whatever — I also did some peaks.

Machinery at second mine

One response to “Wildhorse, Dragonsback, Blackwall”