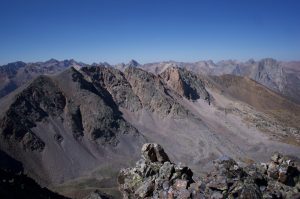 Another morning, another cold start up Rock Creek. This time, though, we planned to stick together to traverse the peaks extending west of Peters, including three unnamed, ranked thirteeners. Our main information source, the Climbing Cooneys, had done the ridge in two parts, but I assumed the whole thing would work as one traverse. After all, “this is Colorado.” 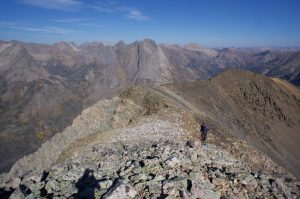 We took the trail to the first open meadow, then crossed the stream aiming for what looked like a break in the cliffs on the south side. The peaks west of Peters sit on a hanging plateau containing several streams and lakes. We had decided to traverse west to east mainly because descending the trail would be faster, but it was also easier to find a break in the lower cliffs going up rather than down. Our “break” worked, but it was some of the day’s trickier climbing, in places best described as “third class grass.” Above said grass, I aimed for an obvious saddle where the ridge transitions from some red garbage to the harder Grenadiers rock. The saddle offered excellent views down into the Vallecito, and across Roell Creek to Hidden and Lost Lakes. A nearby arete drops southwest toward their intersection, with the rock layers angled so as to suggest good climbing; the approach, though, would probably be a tedious bushwhack. It was also clear that we had ascended too far west, and had some work to do to reach our first intended peak. Welcome to mountaineering, Dr. Dirtbag style! 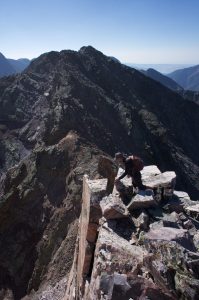 There were multiple subpeaks along the way, and some obnoxious talus, but this section provided some of the day’s best scrambling, with stretches of sidewalk ridge and fun moderate slabs. Dan had not done much scrambling in awhile, and took a more timid line; I had not done much scrambling with other humans in awhile, and was unreasonably impatient. On the other hand, the waiting gave me time to admire the rock on this section of ridge, and temperatures were pleasant. Reaching the first major subpeak, I was surprised to find a register in a small bottle, naming the bump “P1.” We added our names to the short list of people who had travered this unranked peak, then continued toward our first “real” peak, now much closer. Only a few feet farther along, I found a second register for “P2.” This seemed wrong, so I pocketed it to deposit on a different summit. In retrospect, I believe that “P2” is the ranked Peak 13,302, which has its own register container, and is much more popular than anything on the ridge we were crossing. 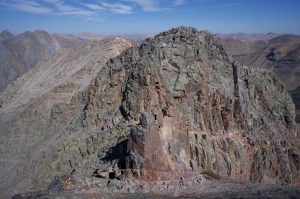 There was one notable difficulty in this section, a sharp notch with a cliff to the left and a buttress to the right. I looked at a probably low-fifth-class downclimb along the ridge, then found a fourth class but very exposed alternative slightly down and right. Dan liked neither, and dropped a good 50-100 feet around the toe of the buttress on wht he described as horrible scree. Once past this notch, there were no more major difficulties along the short scramble to the summit.

13,302’s (or P2’s?) register was a tattered printout of a route description in a bottle. Evidently this minor peak rates a writeup for being one of the harder thirteeners in the area, with a slightly convoluted “Colorado class 4” route from the east. We both found the route fairly obvious and not too hard, and thorougly de-cairned it to give future scramblers the opportuntiy to experience the pleasure of figuring out a mountain for themselves. 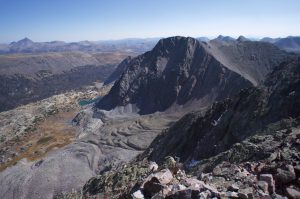 Passing the handful of pinnacles and gullies on the right, we emerged into talus-land. P3’s north and northwest sides look attractive from this angle, but we were unfortunately approaching from the west and south, where there is only talus leading to the south subpeak. Much of this was unpleasantly loose, particularly the climb toward P3. This is typical for Grenadiers rock: when it is solid, it can be fun to climb, being featured and sticky, but it breaks to form talus that slides against itself and does not consolidate. The eastern Grenadiers around Garfield and Electric are similarly unpleasant.

P3’s actual summit protrudes slightly into the Rock Creek valley to the north, connected to the main ridge by a short, narrow ridge with a bit of third class srambling. Its position out of line affords it slightly better views of its neighbors, and of the plateau in between, including the large and convoluted rock glacier between it and 13,302. This summit also held a slightly better register, with a recent entry from none other than… Mr. Hashtag Vanlife Everywhere! I found myself torn between my contempt at the Instagram-ready cliché of a tag-line, and a growing respect for anyone else who would get out and tag so many remote and obscure San Juan thirteeners. Judge not, lest ye be judged… 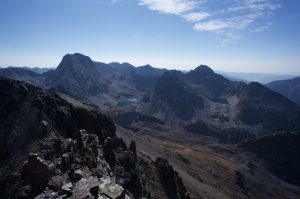 The route from P3 to the next peak (P4?) was another disappointing talus slog. We decided to sidehill below the ridge on the way up the latter, which probably saved a bit of time versus going over some minor bumps along the crest. I think we were both getting tired, as the hike across the long summit seemed endless. However, Dan’s pace had recovered dramatically once past the scrambling, so we were not worried about time. My eyes were drawn to the inhospitable talus-lakes at Oso’s base, and to its imposing north face. Such a prominent peak deserves a quality route; perhaps this offers a challenging non-choss path to the summit? It looks too difficult for me to ever find out. 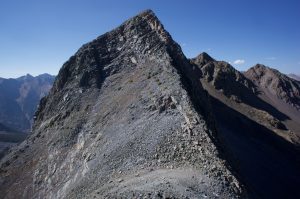 While Dan dodged around south, I stayed on the ridge crest toward Peters. It looks steep and improbable, but is actually reasonable, rarely (and probably avoidably) harder than third class. This part of the traverse, at least, is probably better in the other direction. Peters had first caught my attention on my long dayhike to Oso, when I had briefly hoped to add it to the day’s summit haul before realizing that would be too much work. It felt good to finally stand on its summit just over four years later. 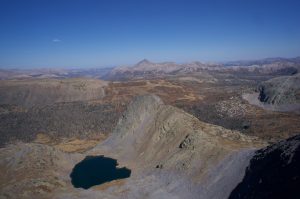 With plenty of time to spare, we took a detour to Buffalo on the way back. It is under 13,000 feet and has less than 300 feet of prominence, so it is beneath most people’s notice, but it seemed like enough of a landmark to be worth visiting, and the south ridge was a quick hike with a short scramble through one notch. We wandered around the flat, rocky summit for a bit, peered over the north side, then dropped to Rock Lake for water before returning to camp via the familiar trail. This being our last night, we celebrated with… more potatoes for Dan, and oats for me, as I had run out of grits. I think I might have used some of Dan’s leftover potatoes from the night before to make my oats really sing on the palate.

I was recently interviewed for Buzz Burrell’s Fastest Known Podcast, discussing a mixture of biographical and speed-oriented stuff. Depending upon how well you know me and how long you have followed the blog, it may or may not be new to you. At the very least, you get to hear what I sound like on a headphone mic, and see a fairly recent head-shot from a cold sunrise in the Weminuche.

Slab from other direction