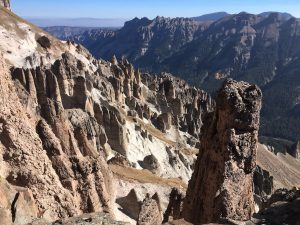 Waking from another frigid night in the Cimmaron valley, Dan and I made a quick visit to Precipice Peak, my last 13er in the area. The route leaves the jeep road at the trailhead, heading east along a dry wash. A use trail emerges on the north side after a few hundred yards, climbing the bank on sometimes-treacherous dirt slopes. Once out of the woods, the trail becomes indistinct as it continues to the peak’s south ridge. From there, it is a mostly-easy hike through interesting volcanic terrain to the summit. 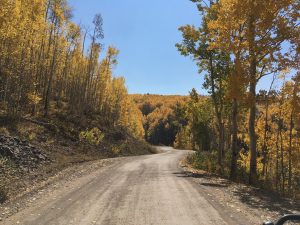 Our business done, we drove back through the spectacular aspens (and hordes of leaf-peepers) to Ridgway, stocked up at the Walmart in Montrose, then headed back south. Our initial plan was to drive to Beartown, then hike in to camp and tag a few peaks the next day. I was particularly looking forward to this part of the trip, since I no longer have a vehicle capable of driving the rough 4WD road to this remote trailhead north of the Weminuche. Though I have reached some “Beartown peaks” in a day from Molas Lake, Vallecito, and Los Pinos, doing so is painful, especially late in the season with short days. Dan seemed keen to revisit the area, or at least tolerant of my quest to check off obscure 13ers.

Realizing that our schedule was too ambitious, we slept near Silverton, then drove in the next morning and hiked to our intended camp spot at the junction of Vallecito and Rock Creeks. Seeing new territory in the San Juans is a rarity for me, so the drive itself was a treat. The road over Stony Pass is absurdly steep at times, climbing thousands of feet out of Cunningham Gulch to 12,500′, then descending from the Rio Grande’s headwaters to Pole Creek. The two fords of Pole Creek and the Rio were easy in October of a dry year, but can float a car earlier in the season. From there, a rougher road continues four miles to the (purported but invisible) site of Beartown, then deteriorates further as it climbs to Kite Lake. Dan deftly drove the vehicle through some rocks that put it up on three wheels, then parked near the Beartown trailhead, a short walk from the Stony Pass trail. 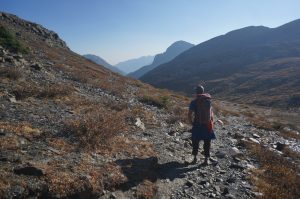 I had never been farther up the Vallecito drainage than near its intersection with Stormy Gulch on my return from the Guardian, so the descent from Stony Pass offered plenty of new views. The north sides of the eastern Grenadiers are all impressive, with Storm King’s northeast ridge striking me as a tempting line. From the pass above 12,000′, the trail descends Nebo Creek to the Vallecito, then continues to drop to our campsite around 10,100′. We found a flat spot in the trees a bit above the valley floor, then set up the Alps Palace, our home for the next four nights. I was glad to have the unaccustomed weight of overnight gear and five days’ food off my back.

Dinner and sleep came early, reminiscent of my twelve-hour nights in the bivy in Peru. I fell asleep instantly, while Dan had more trouble due to his leaking pad and sad synthetic bag. I awoke suddenly, though, when something ran lightly across my face. Turning on our headlamps, we quickly spotlighted a large-eyed mouse in the tent. The thing was oddly slow and stupid, not having eaten any of our food, but merely confusedly ambling around the sides of the tent. Not having experienced such a situation before, I was paralyzed by indecision. Not so Dan: putting on a glove, he punched the mouse to death, threw its corpse out of the tent, and wiped up its effluvia. I closed my tent flap more tightly, then settled in for another seven hours of half-sleep. Isn’t camping fun?!

Middle Fork of the Cimmaron