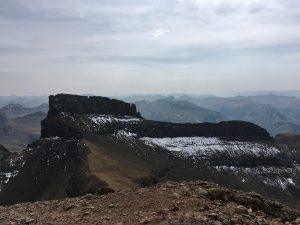 Coxcomb and Redcliff are two peaks at the southeast end of the west fork of the Cimmaron River. Coxcomb is one of Colorado’s harder 13ers, with a fifth class route up its south side, and a 5.5 or so notch splitting the summit ridge before the highpoint. Most people rappel the notch on the way up, and many also rappel north off the summit, a 200-foot (i.e. double-rope) drop. Dan had done it before with a friend, and was not interested in repeating it. Not knowing at the time how difficult it would be to scramble the notch, I decided to celebrate Halloween early by dressing up as a climber, with two 60m half-ropes, a harness, and some other random bits of metal and nylon. 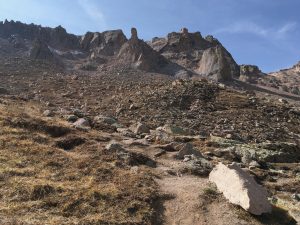 It was unpleasantly cold at 10,500′ in the drainage — somewhere in the mid-20s — so Dan and I waited around the cars for the sun to hit us, not starting until well after 9:00 AM. I struggled to keep up in my costume on the slightly uphill trail, but was grateful for the warmth the effort generated. Dan eventually left the trail to head up U4, an almost-13er to the west, while I continued up the trail to the pass at the valley’s head. The trail crosses west (into the sun!), crossing a couple of clean-looking springs, then switchbacks through some unstable talus, where it has been rerouted a couple of times due to rockfall. As I neared the pass, I admired some odd pillars and cliffs to the right, and Coxcomb’s low end to the left. 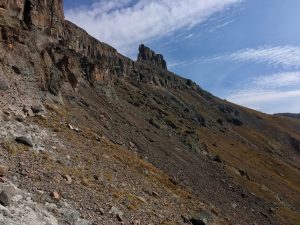 On the other side, the trail drops around 400 feet into Wetterhorn Basin. The route description from Climb13ers said that it was about equally painful to lose the elevation or sidehill around Coxcomb’s south face. I chose the latter, figuring that it would be slightly easier with all the extra weight I was carrying; in retrospect, I agree that neither way seems clearly faster or easier. I found some game trails that helped in the miserable sidehill, and even saw three bighorns running away below me. 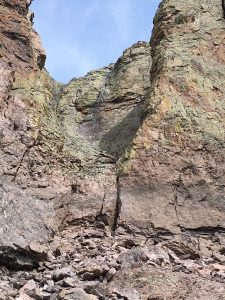 Reaching the south spur ridge, I hiked up a clean gray gully to its left, then continued on grass and talus to the base of the route. As the options for easy climbing dwindled, a climbers’ trail formed where people were funneled to one path. Dan had described a short lieback/offwidth chimney as the start of the real climbing, and recommended that I haul my pack to make my life easier. I took a look, then decided to just go up the thing. As is often the case, it was easier and less secure to stay out of the chimney. I inched my left foot up a slanting crack, found nice positive features for my right foot and hands, and was soon past what I would call a low-fifth-class step. 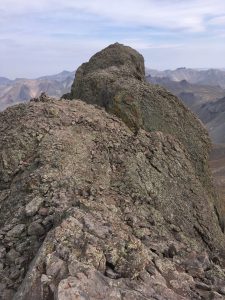 Above, the climbing relaxed to fun third class on knobby volcanic rock. While the peaks to the north seem to be made of soft ash and debris, Coxcomb is some sort of harder rock, possibly congealed lava. The final pitch to the summit ridge is another steep chimney, longer and (I felt) slightly harder than the first, but still no more than 5.easy. I found various rap-tat on the rocks above, but decided to leave it in place. Once on the ridge’s crest, I enjoyed walking east along the exposed sidewalk, checking out Redcliff’s talus-pile of a south face to the north, and fourteeners Uncompahgre and Wetterhorn ahead, partly obscured by California’s smoke, seemingly inescapable even after driving hundreds of miles east. 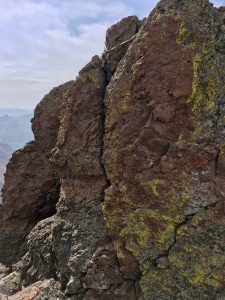 I eventually came to the justification for the first rope, the steep, 20-30-foot notch before the true summit. I peered at a steep gully to the right, then lowered myself off the rap anchor to check out the downclimb. After a few moves down the initial crack, it seems to require a long step down and right to a platform, where the difficulties ease. It looked maybe 5.5 — doable, but harder than I felt like downclimbing with so much weight on my back, and stupider than I felt like downclimbing when that weight included a rope and harness. I retreated, rappeled, coiled the rope, and continued to the summit. 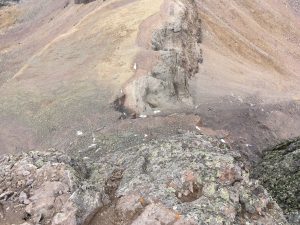 The justification for the second rope was obvious: a long piece of red webbing and an even longer piece of red cord looped around a giant blob of rock. There is a 200-foot rappel off the peak’s north side, leading almost directly to the saddle with Redcliff. While not necessary — it would be easy to reclimb the notch and downclimb the south side — it is interesting, and a much easier and more direct way to reach the saddle than circling around either side. I hid out of the wind to have a snack, watching some people wander around on top of Wetterhorn, then headed over to set up the rappel. Dan and I planned to meet at the saddle, but I did not see him yet. I could wait on top, but it was cold and I knew that, with my lack of recent practice, it would take me awhile to deal with the ropes. I joined them with a Euro Death Knot, then tossed both coils over the edge, watching dismally as they both predictably caught on the knobby rock partway down. Unusually for me, I made a backup with a sling and carabiner attached to my leg loop, then awkwardly lowered myself over the edge and past a short overhang. 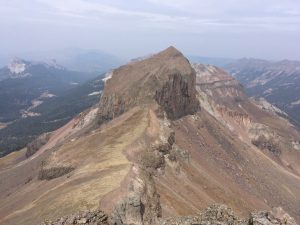 The rappel descends a near-vertical face next to a chimney/gully with some decent ledges. The ropes had blown east and caught on that side of the gully, so I had to stop repeatedly to fight with them, relying either on the ledges or the backup to hold me while I pulled, flipped, and cajoled. Along the way I noticed several other pieces of tat, which seemed too numerous to be merely intermediate anchors for people with only one rope. Is there a route on this corner?

By the time I coiled and stowed the ropes, Dan had made his way across the head of the valley and almost to the saddle. I descended some wretchedly loose talus to meet him, then we dropped our packs for the short hike up Redcliff. The summit view would have been better without the smoke, but Coxcomb was close enough to be clear, and the haze turned the ridges of the San Juans to the southwest into fading layers. It also absorbed enough sun to make it cold on the summit, so we did not linger before returning to our packs. From there, a loose climbers’ trail dropped to the main trail, and it was an easy and familiar walk back to the cars. We watched a hazy sunset, then retreated to our respective cars for a warm dinner and early night.