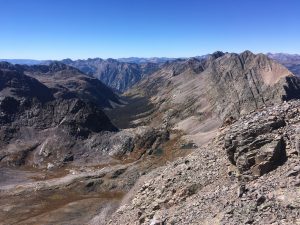 I had already climbed all of the Grenadiers, in three trips down from Molas Lake: Arrow, Vestal, and the Trinities in 2012, Storm King through the Guardian in 2016, and the western ones out to Garfield in 2017. Since then, I had occasionally thought of trying a larger Grenadier traverse. The western peaks are mostly miserable talus-heaps, with only a bit of good scrambling around Point Pun. The eastern ones are somewhat better, though still nowhere near as good as the central ones on the south side of Vestal Basin. When I became aware, on a backpacking trip with Ted, of another moderate route on Arrow, the supposedly 5.6 northeast ridge, the time seemed right to try the traverse. 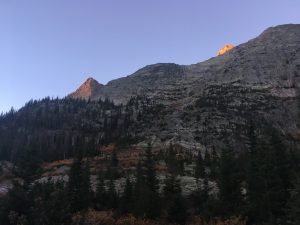 Sunrise on Vestal and Arrow

I have called Molas Lake a “once-a-year approach,” but it is actually not so bad: about 2.5 hours for me to lower Vestal Basin, most of which is easy by headlamp and scenic by day. I set my alarm for 3:30, and was off by 4:30, planning to reach the basin shortly after headlamp time. I meant business, so I started off listening to White Zombie on the run down to the Animas, then switched to slightly less aggressive music for the long hike-jog up the other side. Surprisingly, I saw no tents or other people on this increasingly-popular stretch of trail. 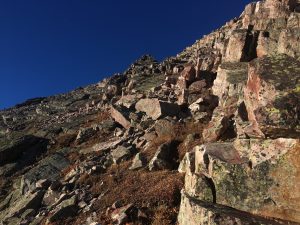 I left the trail just before the first meadow in Vestal Basin, crossing the stream on a couple of logs to find a faint use trait — this is Colorado, so of course there’s a trail. The obvious line seemed to follow a semi-treed slope or ramp up and right to reach Arrow’s north ridge. The “Northeast ridge (5.6)” is a complete misnomer: Arrow has a north ridge, not a northeast one, that ridge is mostly the right side of a broad face, and it is not 5.6. In any case, I made my way up class 2-3 ground to the right edge of the face, then followed it as it became a ridge for the last few hundred feet. 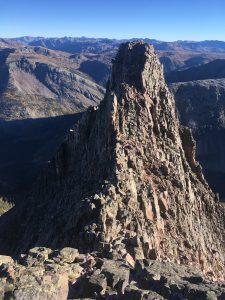 The basin’s uplift layers have broken off along this route, creating several short, vertical-to-overhanging steps. Passing these required a few moves of low fifth class, but certainly nothing that felt 5.6 in my trail runners. I was a bit disappointed, but did not really mind, since it was pleasant in the windless sun, and the view of Electric’s nicely-layered east face led me to wonder about better ways to climb what is just a choss-pile from the south. The final stretch of the ridge is a nicely-exposed fin, more impressive than difficult, which merges with the standard route just below the summit. I descended the standard ramp, staying near the east side higher up, thinking as I shuffled down the slabs that this really is the only logical way to climb this peak; other routes are less fun and feel contrived. 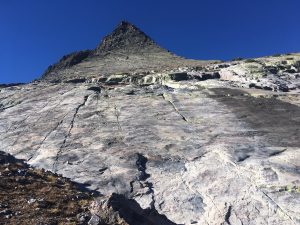 Once off Arrow, I boulder-hopped around to Vestal Lake to grab 2.5 liters of water. Other than snow-patches, this would be my last water until I was off the ridge many hours later. With a heavy pack, I started up the Wham face, hiking the low-angle slabs as they slowly steepen to the obvious grassy ledge. The standard Wham Ridge route hugs the right edge from here, climbing slowly-steepening blocky terrain to the face’s point. I had heard of a slightly harder route called “Center Shift” that climbed the middle of the face, and decided to try that instead. It might have been a bit harder than the standard Wham, but it was also less fun, a haphazard linking of slabs, seams, and corners, instead of a fun, blocky romp along an exposed edge. Once again, the standard route proved best. 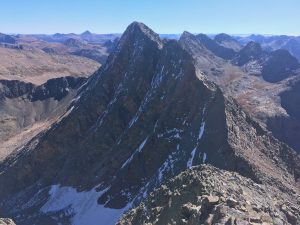 From Vestal’s summit I followed the usual descent, down a gully on the back, then around left to the broad Vestal-Trinity saddle. I traversed along the ridge on bits of human- and goat-trail, then climbed the class 2-3 ridge over several false summits to West Trinity, knocking over a few pointless cairns along the way (it’s a ridge; you follow it to the top…). Middle Trinity looks especially impressive from here, with the rock layers tilting up to form a smooth, steep north face above a permanent snowfield. 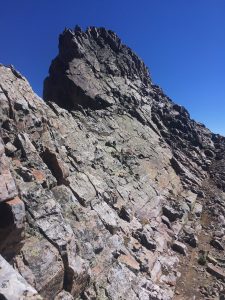 The traverse to Middle Trinity is a bit more complex, since there are a large pinnacle and a vertical step to avoid. The route skirts both to the south, passing some remarkably high pine shrubs, then regains the ridge at some unclear point. I remembered a bit of wet, vertical climbing on my previous traverse, but this time I followed an easier route regaining the ridge farther west of the summit. There were cairns on this path (as there probably were on several others), which I mostly left in place, since it is a complicated path that is unlikely to be worn in. 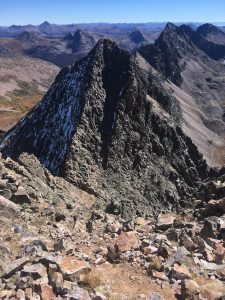 East Trinity is a quick climb and an underappreciated gem. From the summit of Middle, it looks possible to climb a chossy gully in the center of the ridge. However, it is only slightly harder and far more fun to follow the left side, climbing blocky class 3-4 quartzite the whole way from saddle to summit. There are a few loose blocks to watch for, and some serious air to the left, but the climbing is pure fun. 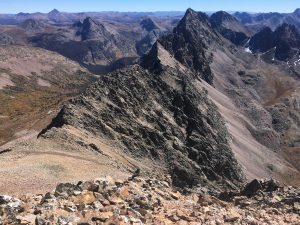 Now it was almost time to leave familiar terrain. In 2012 I had continued northeast a ways, then dropped down to the pass at the head of Vestal Basin, where I picked up a good use trail. This time I continued east, following the unknown mile-long ridge connecting the Trinities to Storm King. I knew nothing about it, other than that it was steep on both sides, with few possibilities for escape. It is probably seldom done, though I did find a cairn on the first bump east of Trinity, suggesting that at least one person had been this way. Though there are tempting ledge bypasses to the south, the best route tends to stay on or near the crest. Most of it is class 2, made tedious by the Grenadiers’ slick and unstable talus. However, there are a few short and apparently unavoidable fifth class difficulties as one approaches Storm King. 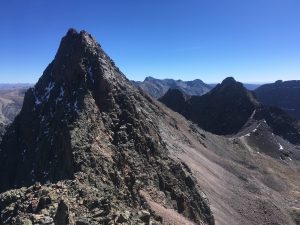 Starting off, I crossed a talus-field and started around the first bump on some ledges to the right. When they proved slow going, with plenty of obstacles and undulations, I returned to the ridge crest, where I spied a cairn on Point 13,360’+. I stayed on the crest to this point, but did not find any register near the cairn. I found a couple of class 4 downclimbs past there, which might have been avoidable with some traversing or better route-finding, but they were not much slower than the loose talus elsewhere. I also found a small snowpatch on the north side, which I used to supplement my water. Not going near water between Vestal Lake and the drainage north of the Guardian makes it almost necessary to do this traverse with some snow around. 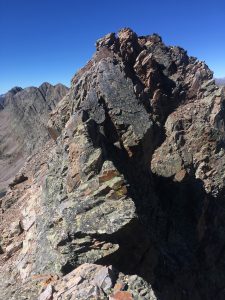 Having found the first cairn, I expected to find one on Point 13,405′ as well, but it appeared untouched. It was also a bit trickier, with some class 4 climbing on the long climb up from the lowpoint, and on the left to get out of a notch before the summit. I built a cairn, then continued toward Storm King, thinking I was almost there. However, this last section proved to be the crux. The ridge narrowed and steepened, blocking any easy bypasses to the side, and there were several sharp towers and notches. The hardest was probably a notch with a fifth class downclimb on the north, then a step across a narrow edge to the next tower. 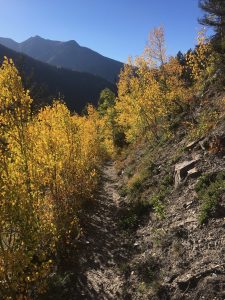 I finally reached Storm King’s summit around 2:00 PM, far later than I had hoped. I did not remember how long it had taken me to traverse from here to the Guardian back in 2016, but I guessed it had been at least an hour per peak. That would put me on its summit around 5:00 PM, and at the head of Vestal Basin at dark. While that was doable, I was more enthusiastic about being done before dark than about repeating an okay but not stellar section of ridge and completing the traverse.

I dropped down to the saddle with Peak Nine, ate some Chex mix, and headed down Tenmile Creek. I reversed the course of my recent outing to the Heisspitz, making an angled traverse from 12,000′ to the saddle west of the Trinities. I found dozen or so cairns on the ridiculously-named “Kodiak High Route,” and destroyed them all, hoping to delay its turning into a beaten-in trail. I refilled on water again at Vestal Lake, shortly after running out, then made the mindless Vestal return. I had seen no one so far that day, and met only a group looking to camp at the beaver ponds, and a solo backpacker just before the train tracks. Back at the parking lot well before dark, I found only three other cars. Finally the late-season San Juans are becoming as quiet as I expect.

Sunrise on Vestal and Arrow