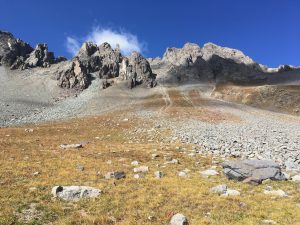 South Lookout and Lookout peaks are chosspiles of very different natures on opposite sides of Ophir Pass. Since both are short outings from the road, I had planned to combine both with a bike ride up the well-grade dirt pass. However, I got distracted by V 5, and later got lazy, so I only ended up doing the first, leaving the second for another day out of Columbine Lake. 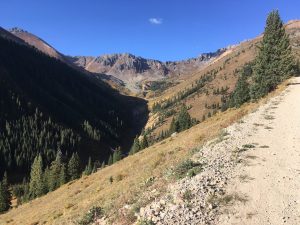 Most of the pullouts at the base of Ophir Pass were occupied by Sprinters, but I eventually found an empty one near the creek. It was cold in the morning, though, dark until after 6:30 and sunless until well after 8:00, so I got a late start, riding as quickly as I could up the Ophir Pass road until I reached the sun, then stopping to warm my hands. The road is steep in a couple of places, but generally well-graded and easily doable in a passenger car. I locked my bike to a tree at the obvious switchback, then followed a clear trail traversing into Paradise Basin. 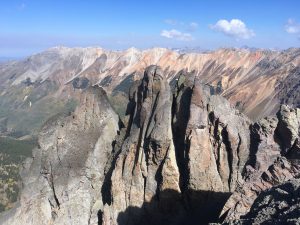 The trail remains well-defined well into the basin, then gradually fades and disappears near the upper tarn. The route description I found mentioned climbing the “middle” gully on the east face; I chose the obvious chute left of the summit, which looked like the only sensible option. I followed turf as far as I could, then suffered the loose dirt and scree for awhile before eventually choosing some class 3-4 climbing to the right when the rock became solid enough. I passed a cairn, eventually emerging on a flat saddle, from which 30 feet of third class climbing led to the south summit. Fortunately this one is clearly the highest, because the north summit is one of three imposing choss-blobs, probably reached by climbing the gully/chimney to its right from near the saddle. My route description apparently described climbing this summit, as it mentioned a “75-foot crack,” but I did not try to reach this lower but far more interesting point. I took some pictures of it, the town of Ophir below, and the Wilsons to the west, then continued toward V5. 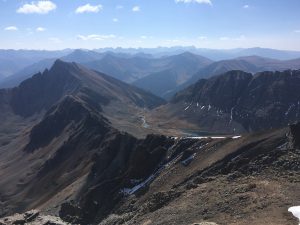 I ran into some thought-provoking downclimbing south of the summit, carefully descending some outward-sloping rotten ledges covered in gravel before reaching a ridge junction, then turned left onto easier ground, losing elevation as I made my way above Clear Lake. I was glad to have decided not to approach that way, as there were already a half-dozen Jeeps parked at the lake, and more on their way up the switchbacks from the South Mineral road. I did not see an obvious way up V5, but assumed that one would present itself as I got closer.

Reaching the base of the final steep part, I saw no direct path, so I side-hilled miserably around to the right until I found a gully leading to the ridge east of the summit. I found some footprints and a cairn along the way, so I was on the right route. There appeared to be no other way off the summit, so I reversed my route circling around the summit, then followed the ridge back toward South Lookout until I found a chute leading into Paradise Basin. Once I reached the trail, it was an easy hike back to my bike. Lookout itself was a short ride up the pass and about 1900 feet on foot, but laziness got the better of me, so I bombed down the road instead, to wash off in the creek and head into town.

Clear Lake and the Jeep hordes

Wilsons and Ophir from South Lookout