From Soso to Hell and back 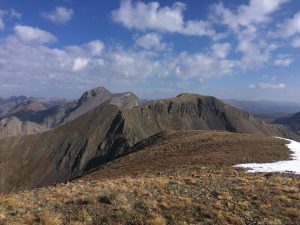 Mount Soso is a deep Weminuche peak immediately south of Oso. I had climbed Oso on a long day from Los Pinos via Emerald Lake, possibly the largest natural lake in the state. While Soso could be approached the same way, it seemed much easier to approach it from the high Cave Basin trailhead along Middle Mountain Road; this might also be a quicker approach to Oso. I initially planned to do it on a recovery day, but added to a late start combined with climbing nearly 3000 feet and ten miles of dirt road from Vallecito Reservoir, it proved too much. After a hike to the Dollar Lake overlook, I rode back down the hill and drove to the trailhead to camp. 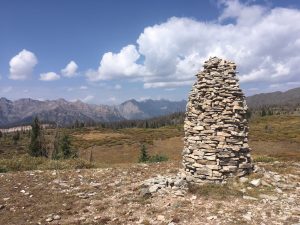 It was cold near 10,700′, so I got a late start around 6:00, which still requires a bit of headlamp time. Middle Mountain is popular among hunters, so I saw several trucks drive by while eating breakfast in the car. I followed the familiar trail over a gentle saddle, then continued through several meadows to the open plateau, where I enjoyed the sunrise view of the Needles and Grenadiers across the deep Vallecito valley. I once again passed the 8-foot hollow cairn I had seen the day before, an impressive edifice possibly built by surveyors, then left the trail to cross open ground and occasional willows toward the peaks. 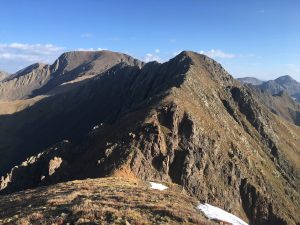 Looking back from first 13er

There are two minor bumps between the cairn and the first ranked 13er, and given the broad and gentle plateau I had crossed so far, I expected few difficulties. The first bump was a broad mound that I could have avoided to the west, coming up the second bump’s west ridge via its gentle south slope. After that, though, things got unavoidably trickier. South-facing terrain in the area is mostly gentle and covered in grass. North-facing slopes, however, are sheer, with large piles of loose talus below, probably a result of stronger freeze/thaw cycles on north slopes rather than ancient glaciation. North ridges are sharp, and frequently chossy. The result is that the multiple side valleys extending east and west are difficult to cross and often deep, forcing one onto a ridge with steep, chossy descents. This may still be a shorter and faster approach to Oso than the Los Pinos trail, but it is slow going.

Reaching the first 13er after some extended third class scrambling over a short subpeak, I found a register unofficially naming it “Elk Peak,” with a couple entries per year going back only a few years. The second 13er was only a short, easy distance away. Its register was nearly identical to the first, though one visitor had, apparently unironically, written “#vanlife” by his name. I gagged a bit, then recovered and added a pointed definition of “#carlife” next to mine. Instagram poisons everything. 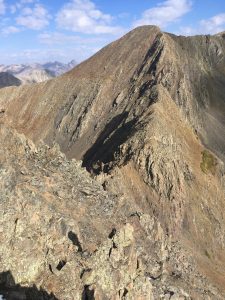 The ridge off the second peak was moderately tricky, being narrow and rotten, with pinnacles along the crest. I followed some mountain goat tracks traversing down snow and mud to the right, then regained the crest just above the saddle. From there, the best route to Soso’s summit plateau stayed left of the ridge, climbing a fun mix of slabs and blocky third class. One short turf-hike later, I reached the highpoint well before noon. Oso lay one deep and time-consuming saddle to the north, while Irving lay a bit over a mile to the west across a thousand-foot valley. 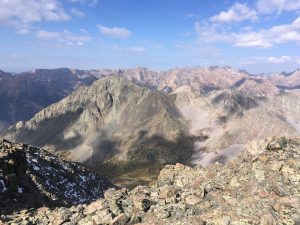 It was chilly, and there were a few clouds forming, but the weather was not serious, and I had plenty of food and time for the two-hour round-trip to Irving. But I lacked the will for some reason, so after a semi-nap on the lee side of the summit, I descended the easy east ridge to a saddle, then dropped into the drainage leading to Moon Lake, where I picked up the Emerald Lake trail. I had noticed a trail connecting back up to Cave Basin via Hell Creek, and I though this way would be faster, or at least easier, than reversing the ridge. Little did I know how aptly the creek was named. 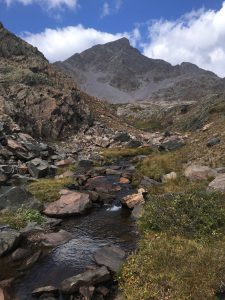 The hike/jog down past Emerald Lake was as pleasant as expected. I passed a large and unoccupied canvas tent above the lake, with a hitching line nearby; its residents were out riding somewhere, though I did not see them. I also saw a couple guys and a dog fishing in the large lake, but once again found the area wonderfully uncrowded. I was tempted to climb straight up either the Dollar Lake drainage or the one to its south, gaining something like 1700 feet to the plateau above, but decided instead to lose another 800 feet to pick up the Hell Canyon trail, which would require more gain, but might be faster than going cross-country. Unfortunately my misgivings, founded in not having noticed the trail junction on my way out, or on my previous trip to Emerald Lake, were well-founded. 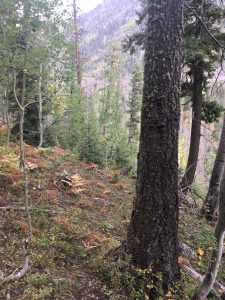 Thankfully the Hell Canyon trail splits off the main trail exactly where the Forest Service topo indicates. After finding a bit of rockwork near the stream, I saw no sign of the trail in a field of ferns, but picked up some faint switchbacks on the other side, along with the occasional blaze. Sadly things deteriorated from there, as the trail disappeared in further ferns, aspen groves, and deadfall. I probably found it about half the time on my way up, as it quickly changed between being useful and invisible. It seemed like it had not been maintained since shortly after it had been built, perhaps in the late 1800s. I wish Forest Service maps labeled trails with their construction date and last maintenance date; I’m sure the FS records this information somewhere. The drainage south of Dollar Lake almost certainly would have been faster, as it appeared to be open turf. Hell Canyon, on the other hand, was a mixture of woods and rockslides. In the time it took me to slog back to the Cave Basin trail, I could have tagged Irving and returned via the ridge. So much for efficiency and common sense…

I reached the car late in the afternoon, partly pleased to have seen so much new terrain, and partly annoyed at myself for wasting time thrashing through woods, time that could have been better spent tagging remote peaks that will now require another trip. Irving in particular is painful to reach from any side, blocked by Oso on one side and the Vallecito on the other. After another good night of acclimatization at 10,700′, it was time to resupply and find some shorter approaches and easier peaks.

Sunrise on Needles and Grenadiers

Looking back from first 13er

2 responses to “From Soso to Hell and back”