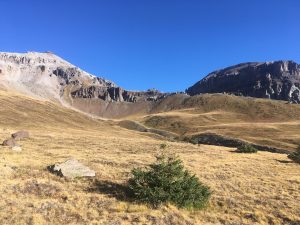 I had some Sierra plans for the end of the summer, but with much of California on fire, and the rest enveloped in toxic smoke, I thought it best to head elsewhere until the barbecue is over. Mid- to late-September is too late for the Winds, so the natural choice for this time of year is the San Juans, Colorado’s best mountains. The afternoon storms are mostly past, the leaves are turning, and the Front Range tourists are mostly back at work and school (or at least tied up in endless Zoom meetings). I did not have any “must-do” peaks on my schedule this time, but I can always think of something to do in the Weminuche, and it had been awhile since I had done my trio of once-a-year headlamp approaches: Molas, Purgatory, and Vallecito. 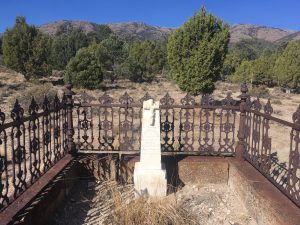 I broke up the tedious drive across Nevada with some meaningless peak-bagging: pick something with 2000+ feet of prominence near the road, then bike and hike to the summit. This time I slept near Ely, which was brutally cold as always (34 in the morning!), then rode and hiked up Ward Mountain, a mound with some equipment on top. There was also a small cemetery near the nearby ghost town of Ward, which I found more interesting than the peak.

Coming in the way I did, it made sense to start with something out of Ouray, and Ridgway and Whitehouse fit nicely. Both are easy 13ers lying in the scenic and chossy region between town and Mount Sneffels, reached by the new-to-me Weehawken Trail. Whitehouse is visible from town, rising over 5000 feet in a mix of forest and colorful cliff bands. I had planned to do them as a bike shuttle, tagging “Corbett” before dropping down Oak Creek to town, but the traverse between Whitehouse and Corbett looked annoying. 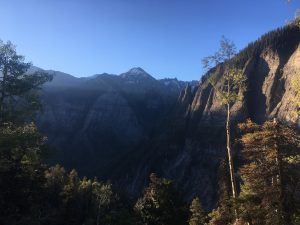 I slept at a sneaky spot off the Camp Bird Road, then drove over to the trailhead and finished my coffee before starting a bit after first light. (I would have felt bad camping directly in front of the “no camping here” sign, and didn’t want to pay $10 for a spot at Thistledown Campground across the road.) After too much time on packer-built and -ruined Sierra trails — trenches filled with pulverized dust and manure, interrupted by large and irregular steps — it was a pleasure to climb through a forest on a trail of smooth humus built for humans. Ouray calls itself “the Switzerland of America,” and for once the name felt apt for this sunrise climb. Across the valley, a steep and narrow cascade fell between to peaks to join the main Canyon Creek. The rock on the other side of Weehawken Creek reminded me of the Eiger: improbably steep and utterly rotten. Unlike in Switzerland, I doubt people try to climb these buttresses. 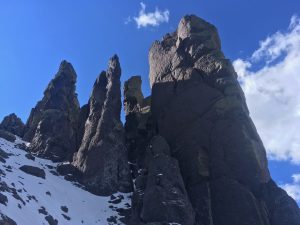 The trail mostly stays well above the narrow valley bottom, crossing various side-streams somehow still trickling this late in the season. As is frequently the case in this region, the valley’s sides are steep and decorated with hoodoos. The path eventually gives out in an open cirque, surrounded by Potosi, “Coffeepot,” Teakettle, and Ridgway. From there one can head more or less straight for Ridgway, surmounting a small third class choss-band, then crossing some grassy slopes to gain its south ridge. The main goat-path (and, to a lesser extent, human-path), switchbacks to the saddle between Ridgway and Whitehouse, but I thought the ridge looked easy enough and more direct. Sure enough, with only a couple short sections of class 3 I found myself on the false summit, a short ridge-walk from the top. 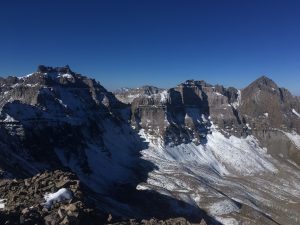 Sneffels looked particularly fine from this vantage, as did the peaks along the ridge to Potosi. Snow from the recent early-season storm lingered on higher north aspects, so my perch at the northern end of the San Juans accentuated the whiteness. In the clear Colorado air I could make out Lizard Head to the southwest, the Needles and Grenadiers to the south, and Uncompahgre to the east. There was a bit of noticeable haze over the plains 6000 feet below to the north, but these were the clearest skies I had enjoyed in awhile. 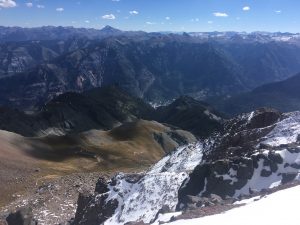 As expected, I found a faint use trail dropping east toward the saddle, skirting below a choss-pinnacle to join the switchbacks of the main approach. Whitehouse’s west side looks intimidating, but I skirted around to the north and soon found the easy class 2 gully leading to the summit plateau near the lower west summit. I had an easy walk to the cairn at the higher east summit, then looked over the abrupt north and east edges. Getting to Corbett looked annoying, with snowy choss and cliff bands getting in the way, so I decided instead to return to the saddle and descent Weehawken. I am getting too old to enjoy bombing down trails as I once did, but this one was soft and smooth enough to be fun for a change. I passed a few people headed in both directions, then hung out at car for awhile, enjoying the cool shade of an aspen grove and deciding where to head next.