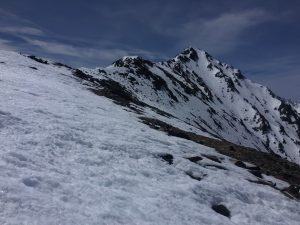 Mount Tom is arguably the most striking peak on the Bishop skyline, towering almost 10,000 feet above town, with its long north ridge rising around 8,000 feet from Pine Creek. While it is not technically difficult or interesting, it is striking enough to be a fairly popular climb, often done in the early season when snow covers some of the talus, or at least provides water. I was in the area and needed a workout, so it seemed like a good time to finally check it off my to-do list.

Looking at the map, I found a side-road on the way to Elderberry Canyon that looked like a good place to start, so I headed up there the night before to camp. The road was rough in places, but careful driving got my Element to a flat spur near the end with no parts lost and only moderate scrambling of its contents. I set my alarm for 4:35, planning to start at first light, then tried to get some sleep. 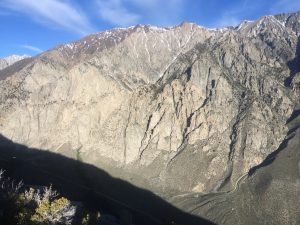 I got started a bit later than first light, but fortunately the temperature was cooler than the previous week, and some clouds over the Whites delayed the direct sun. Like the northeast ridges of Lone Pine Peak and Mount Williamson, Tom’s north ridge starts with a couple thousand feet of miserable, brushy sand. I followed some sheep tracks and pulled at granite outcrops as I made my slow way to the crest. It was slow going, but probably better than gaining the ridge from Pine Creek to the north or west. 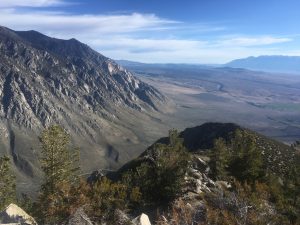 Once on the crest, I found easier sand and mild brush, leading to sparse woods and eventually talus. I also found a faint path and recent footprints, confirming my impression that this was a relatively popular objective this time of year. After dodging some snow patches, I had to cross one, and found fresh boot-prints; clearly someone had been up here in the last day or two. The snow was only intermittently supportive, so I was glad to have someone else ahead of me digging the postholes. 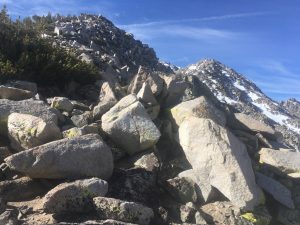 I stopped to shove snow in my water bladder at the first clean patch of snow in the woods, then continued out onto the open talus, where I encountered some mild scrambling. Looking at the ridge ahead, I was surprised to see two men ahead of me — it was a weekend, but I hardly expected company. I easily caught them, and chatted for a few minutes before continuing. They were both up from LA (filthy tourists…), an experienced guy taking his novice friend on his first Sierra peak. It seemed like a rather ambitious choice of objectives, but I did not think there were any technical obstacles, and they had plenty of daylight to use. 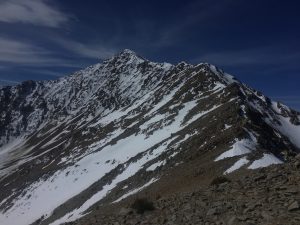 From where I met the pair, it was 2.1 miles to the summit as the crow flies. I anticipated an endless slog through loose talus and slush, but the rock was not quite as loose as I had feared, and the snow along the ridge had been mostly beaten solid by the wind. I took one unfortunate tumble when my wet and worn-out shoes slipped on a transition from snow to rock, bruising my ribs a bit, but had no serious difficulties on my way to the summit. The many false summits could have been demoralizing, but I had mentally prepared myself for them, and was feeling moderately peppy. 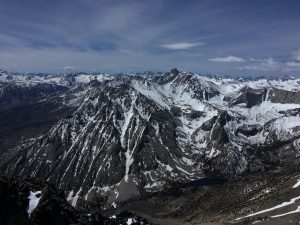 I reached the summit in 5:25, and found the register box exposed and filled with various booklets and scraps of paper. I couldn’t find my entry from when I climbed Tom from Horton Lakes in 2009 or 2010, but added my name to the latest book. Looking south and west, the peaks still looked surprisingly skiable, though having recently suffered 90-degree temperatures in the Owens and Saline Valleys, I was not in that frame of mind. I took a few photos, sent some texts, then headed back down the ridge. 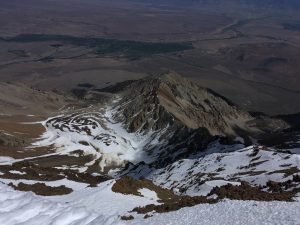 I passed the experienced guy a few false summits down, and was unsurprised to learn that his friend had given up. I probably should have retraced my route, but I had been told that descending Elderberry Canyon was quicker, so I turned down to the east as soon as I reached a chute that did not cliff out. I hoped to boot-ski or plunge-step the upper snow, but was forced to do a pathetic sitting glissade to stay afloat in the bottomless slush. The rock to either side was not amenable to scree-skiing, and the avalanche snow lower down had also deteriorated to slush, so it was slow and unpleasant work descending to the level of the Lambert Mine. 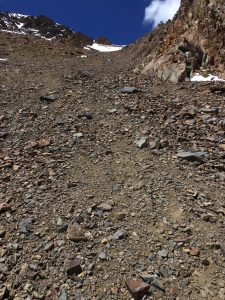 Things got a bit easier from there, as I picked up the old trail to the mine, and the snow in some of the gullies was compact enough to boot-ski. The trail turns stupid and horizontal lower down, so I ignored it in favor of the easy cross-country. I eventually reached the badly overgrown stream crossing, where I found my first liquid water all day, a welcome replacement for the piney melting slush in my bladder. From there I was on familiar ground, thankful to have only a daypack instead of skis as I switchbacked through the buckthorn, then jogged the road back to my car, cutting the corner to save a tiny bit of elevation loss. I was back at the car by mid-afternoon, making for a moderate day. I doubt I will do this route again, but if I did, I would probably just descend the ridge; Elderberry wasn’t awful, but it is much better on skis.