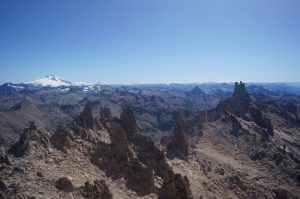 Cerro Catedral is more of a small range than a mountain, a sprawling collection of lakes and granite spires southwest of Bariloche. Most of the spires, including the highest, the Torre Principal, are too hard for me to climb unroped, but Catedral Sur is a walk-up by its easiest route, and a moderate scramble by its northeast ridge. It proved to be a pleasant outing, and a long-ish day from the wonderful national park campground at Lago Gutierrez. It also turned out to be my last scramble in the area, as I was forced to flee the next day from the world’s rising COVID-related panic. 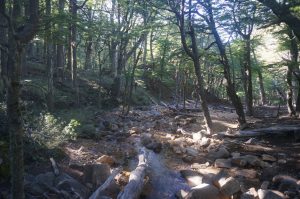 I got a reasonably early start after breakfast, throwing my down jacket in my pack against the morning cold. The previous day’s storms had dropped temperatures dramatically, and it would take a couple days of sun to warm back up. I mostly walked the rolling trial around the lake toward the Arroyo Van Titter, jogging here and there to stay ahead of a group of locals who walked surprisingly fast and stopped less than I did. My mountaineering pack, the only one I have on this trip, has no stash pockets, and my water bladder is completely non-functional, so I had to stop and take off my pack every time I wanted to eat, drink, or remove clothing. I look forward to getting back to, if not the States, then at least my daypack. 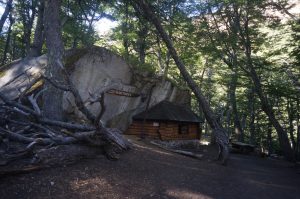 I easily left the other hikers once the trail started climbing steeply toward the Frey hut. This was a good, no-nonsense footpath, steep and only somewhat eroded. I began meeting others descending as I climbed, mostly local hikers probably headed home after spending one or more nights in the region’s huts. Cerro Catedral has several; while Frey is the most popular with climbers thanks to its proximity to the Aguja Frey and Torre Principal, the others form an apparently-popular multi-day loop. Along the way, I passed another unusual structure, a refuge or food stand built under a giant boulder. 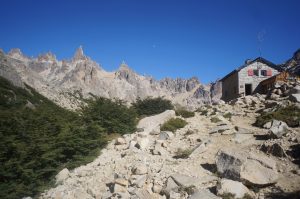 The hut featured the most American crowd I had encountered in a long time, including an older couple visiting their daughter, who was down in South America for some kind of internship. I talked to them for awhile, then met Isaac, a young climber from Seattle who was also in the area for school-related reasons. He had flown down without his rack, and was not having much luck joining another group of climbers at the hut, so I invited him along on my scramble up Catedral Sur. It sounded like it wouldn’t be too hard; the hardest part might be figuring out which peak it was among the many ridges and towers. 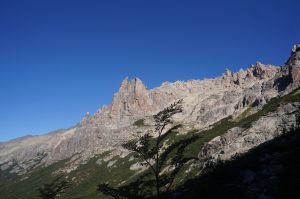 We followed a use trail to a pass a short distance southwest of the hut, then stared around in confusion for a few minutes. There were dozens of spires of various heights on the ridges around us, none obviously the highest, and we had only various low-resolution maps. We eventually set off descending across the head of the next valley over, and soon found cairns and a good use trail, suggesting we were on the correct route to something. It was fortunate that we found the trail, because the brush is both dense and woody, making bushwhacking somewhere between bloody and impossible. 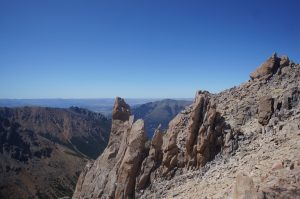 The trail passes under the closest large slab, then climbs toward a cluster of impressive spires, including a large flat one called the Campanile Esloveno. I thought Catedral Sur would be to the left of that, but I could not pick out an obvious summit. We headed vaguely left up talus with the occasional rock step, eventually reaching a saddle near a wildly-overhanging tower on an indistinct ridge. The tower is striking enough that I am sure it has a name and has been climbed, but I can’t imagine ever doing so without throwing a rope over the top and prussiking up. 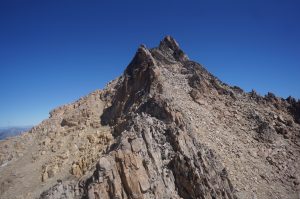 The climbing slowly got trickier as we progressed, with a bit more class 3 here and there, and while the ridge never grew truly sharp, there were fewer opportunities for escape. The ridge finally became truly tricky and ridge-like just before the summit, where there are a number of progressively larger and more difficult gendarmes. I immediately went into peak-bagger mode, bypassing the first few to the right while Isaac, true to his climber nature, went straight over the top before seeing how much easier I had it. One of the last few gendarmes, I tried a couple of approaches before finding some low fifth-class shenanigans to the right. My scrambling game was rusty after months of choss, but it came back quickly. 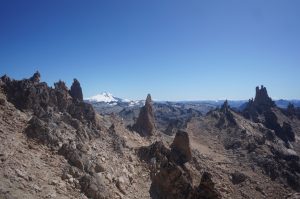 The other side was dismayingly steep, covered in crunchy moss and a bit of fresh snow. We found our way off, but decided to skip the last one or two, traversing around left to the base of the imposing summit block. While it looked impossibly vertical from this side, it turned out to be just a bit of fourth class on the other, and we were soon on the summit. After climbing in a t-shirt on the protected ridge, I was shocked at how cold it was in the wind, and was soon glad I had brought my down jacket. I was anxious to get back to camp at the lake, but the view of the other needles was phenomenal, with glacier-covered Tronador looming behind them some twenty miles away. Though only 11,500′ high and 41 degrees south, it holds some impressively large glaciers on this side. 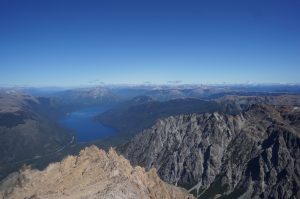 We finally headed back, down-scrambling the summit block and then scree-skiing the peak’s easy north slope. There is a perfect campsite here near some huge boulders and a small stream, surrounded by all of the towers a Real Climber could want, but we saw only one tent and no people. Once back at the hut, I quickly said “goodbye” and began hike-jogging back toward camp. My pack was awkward jogging the flats, but I wanted the miles to pass quickly.

I had initially planned to ride on to a camp along Lago Mascardi, but it was late enough that I opted to stay another night. While it was calmer and warmer, it was also a weekend, so I had a group with a bunch of noisy kids on one side, and a couple who were very bad at building a fire for their asado upwind of me, smoking me out as I ate my usual polenta with eggs and vegetables. I played with the herd of four camp kittens in the morning, trying not to let their sharp little claws puncture my flesh or give my down jacket yet more leaks as they climbed all over me and my laptop. Then I took off a bit later than planned toward the far end of Lago Mascardi and the trailhead for Cerro Bonete, another peak closer to Tronador.

Something like twenty miles into the ride, just after turning off onto a dirt side-road, I learned that Argentina had closed all of its national parks due to COVID-19. For the present, this just meant that most of the peaks around Bariloche were off-limits, a disappointment I could get past. But the longer-term implications were more worrisome: if Argentina was already shutting things down so indiscriminately (and, I thought, senselessly), there would doubtless be other restrictions coming. I thought it might be best to cross back to Chile as soon as possible, where there would be no more borders between me and either my flight out, or at least the American Consulate in Santiago.

I rode back to Bariloche to see what information I could find, learned that Argentina had closed its borders to incoming Americans, then biked on to camp on a side-road between arms of Lago Nahuel Huapi. The next morning I rode to Villa la Angostura, checked out the situation again, and was alarmed by the rate of new flight cancellations, quarantines, and other measures. I rode on as far as I could, getting through the Argentinian side of the Paso Samoré and into Chile before being forced to camp behind some maintenance sheds when the wet cold made my hands too weak to keep riding.

The next day I stuffed my wet tent into my dry-bag, rode to Osorno, and took an overnight bus to Santiago. I had no trouble finding two bike boxes — one for my bike, and a second to mutilate into a trailer box — but after packing things up in the street, I had more trouble finding a large enough vehicle to take everything to the airport. Eventually, with the help of an enthusiastic cabbie, I mutilated the bike box into the back seat of a compact taxi, shoved everything else in on top and in the trunk, and made it to the airport by mid-afternoon.

I was seriously disgusting at this point, but fortunately Ted came through with a free room at the airport hotel, where I could shower for the first time in a week, recover a bit, and create a trailer box. Recipe: cut a bike box open, fold it over taco-style over the trailer and a bunch of other stuff, cut off the ends, then apply half a roll of duct tape; finish by paying a guy at the airport $10 to wrap the mess in plastic. I had no scale this time, but the bike box came in at 20 kg, the “trailer” at 23, so my two ridiculous boxes both qualified as acceptable “sporting equipment,” and therefore flew free. One long flight half-full of often-masked people later, I was back in the States, ready to face whatever comes next on my (sort of) home turf.

Aguja Frey from just below hut