An upset stomach kept me from sleeping well, I was feeling no better in the morning, and I was out of instant coffee. I unenthusiastically swallowed some hot chocolate for breakfast, then packed up, popped some metronidazol, and got on my way down the hill toward Pucon. It was a cold descent on the shady side of the range, and steep, making me glad I had not crossed this pass the other way. When I finally reached the valley floor, the views opened up and I was finally able to see the shape of the terrain. It reminded me a lot of the Skagit Valley in the North Cascades, with sparse, moldy farms on a flat valley bottom, and trees growing on impossibly-steep slopes to either side. There were even wild blackberries growing along the road, and some shops advertising salmon. The only incongruous element was the huge volcano rising behind me at valley’s head. 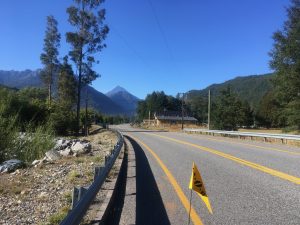 I tried some berries, then nectarines and fruit juice bought in one of the small tourist towns, but my appetite needed more time to recover. I decided to take a easy day, riding only about forty downhill miles to Pucon, then climb Villarrica from town on the next. There are several campgrounds in this sizable tourist town, which offers watersports on Lago Villarrica in the summer, and skiing on the volcano in the winter. I chose one that advertised WiFi, then settled in to catch up with the world. In classic Argentinian fashion, though I was now in Chile, the hot water was only on between 7:00 and noon, and 7:00 and midnight, so I waited impatiently to take a comfortable shower, then quickly ate and tried to sleep as my neighbors started their evening revels.

I still felt off the next morning, so I slept in, then headed down to the beach to watch the humans frolic in the water. Evidently the Argentinians share the Mexican suspicion that humans sink like bricks, so swimmers — waders, really — were only allowed in a few roped-off sections. The rest of the lake was open to everything from jet-skis to sailboats, and there was even a paraglider overhead. It looked like they rented sailboats to amateurs, which made me wonder if there is a tug boat that comes around at the end of the day to collect them from the lake’s leeward shore. Next I wandered around town running errands and playing tourist, drinking overpriced coffee at a German-themed cafe, then sat in the park to write postcards. Though it had no WiFi, the park was a pleasant place, with plenty of shade, various flowers, and hawks that strutted around the ground like pigeons. Finally I swung by the Conaf office, where I learned that I needed crampons, ice axe, boots, and… a printout of my AAC membership, which is just as ridiculous as a radio, but a whole lot cheaper. Fortunately I had a PDF of my AAC membership card on my phone, and no one noticed that it had recently expired. (It was nice knowing you, AAC, but the Schweizer Alpin-Club is probably a better deal for me this year.) I woke in the dark the next morning, and started riding for the ski area as soon as it was light enough for cars to see me clearly around 7:30. The paved road to the park boundary is brutally steep, so I was glad not to have the trailer, though I was still slow with my heavy pack full of mountaineering gear. I stopped in at the office, where I learned that the rain had scared off the other climbers, so I would not face the crowds I had seen in photos despite its being a weekend. I also learned that I needed a helmet (bike helmets are okay) and there is a $5.50 entry fee. Paperwork complete, I was off up the dirt, which was mostly less steep, but still a grind. I locked my bike to the trailhead sign, put on pants over my tights for decency, then took off hiking up the ski slopes. Following Biggar’s instructions, I followed the left-hand chairlift, thereby both finding a nice use trail and avoiding the Conaf guard parked at the top of the right-hand one. Signs in both Spanish and German at the top of this lift warned that it was Very Bad to continue without permission and proper gear. The trail continued above, passing some weird concrete structure on the way to the glacier’s base. It had looked from town that there might be a dry route all the way to the summit, and there may be, but it would still at the very least involve a bit of sketchy scrambling on volcanic cliffs, then acres of spiky choss, so I changed into boots and crampons, took out my axe, then started up the glacier, following an old boot-pack. It had been awhile since I had used this gear, but I managed to keep the spiky side down. I was depressingly slow for the altitude, though, not sure whether to blame my recent intestinal bug or my generally run-down state. Rounding the bend toward the upper glacier, I was surprised to see people in bright-colored clothing descending from the summit, and patted myself on the back for doing everything according to the rules. Reaching the top of the glacier, I found a dozen or so people hanging out eating lunch. They seemed to be one large guided group with at least two Americans, one Frenchwoman, and two local guides. I dumped my crampons and axe, made use of my French until it crashed into my Spanish, then continued to the summit. Apparently the lava is high enough to be visible from the rim in early February, but by early March it had retreated and was well out of sight, though I thought I heard a couple of splashes. I certainly saw plenty of fumes, though, which smelled horrible and burned my eyes. Still, I made a full circuit of the summit crater to tag the highpoint (which is apparently verboten). Along the way, I got a good view of the large and crevassed south glacier, passed right by a few steam vents, and crossed some strange new rock that looked a bit like crevassed ice. I passed the tourists as they took off their crampons below the glacier, then had a nice scree-ski back to my bike. From there it was a fast, fun coast back to the campground, where I spent an unprecedented third night before continuing south.