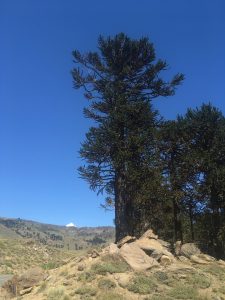 I had another long leg south, but rather than continuing along 40 through the arid plains, I decided to travel closer to the mountains. Thanks to a map from the tourist office in Las Ovejas with up-to-date road conditions, I knew this would involve more dirt, but I hoped the scenery and easier water access would make up for it. Heading out of Las Lajas, I turned west toward the Pino Hachado pass, beginning a long, gentle climb out of the plains. The road roughly follows a river, and while it probably wouldn’t taste the best, it was nice to have easy access to water for a change. 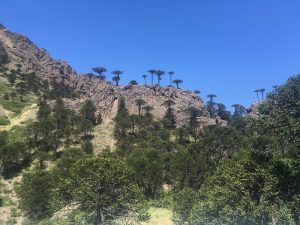 As the road climbs away from the river to avoid a canyon in the foothills, I noticed some strange-shaped trees on the surrounding basalt hills. They looked a bit like Ponderosa pines, with straight trunks and horizontal branches, but there was something off with them. The branches drooped and seemed greener, and some of the trees were a bit like palms, with tall, bare trunks and branches only at the top. I have never been to Africa, but for some reason they seemed like something one would see there. When the road finally came near a stand of them, I got off the bike to take a look, and found they were much weirder than I had anticipated. Rather than having groups of needles, the limbs were covered in broad, hard spines or leaves. It looked like some sort of early attempt at a pine tree, from back when ferns and succulents ruled the world. I later learned that it was an Araucaria araucana, or pehuen in the local native language. 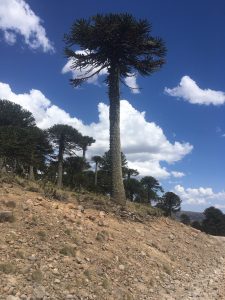 I continued upriver through a sparse forest of these for awhile, then stopped at a dirt road just short of the customs post to begin heading south. I grabbed some water from the side-stream, which I hoped was clean, then felt silly for doing so about five minutes later. This area is littered with springs, some coming right out of the road cut, so I could have clean water almost whenever I wanted. It is also a popular picnic spot, and I passed a dozen or so Argentinian families hanging around their fires, no doubt preparing for an asado.

The road was only moderately unpleasant up to a broad pass, then deteriorated on the descent to join the east-west road from Zapala to Lago Aluminé. After what seemed like forever averaging less than 10 MPH downhill, I reached the main road, which I misremembered to be paved. Instead, I found wretched high-traffic washboard, busy with weekend traffic. Some drivers had become frustrated enough to create their own side-road in places, as I had seen in the Puna de Atacama, so I used that where I could. Fortunately, the road had been paved for the final descent to Lago Aluminé, so I was able to take it at a decent speed. 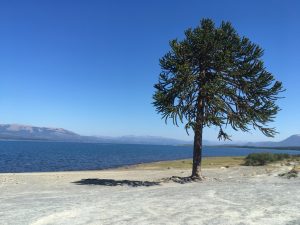 I was eventually headed south, but I needed groceries, so I took a side-trip along the north shore of the lake to spend the night in Villa Pehuenia. This was one of the most tourist-y places I had visited in Argentina, with prices to match, but it was worth it to spend the night on the shore of a giant lake, in a forest of ponderosas and araucaria. The campground host was friendly and talkative, telling me what the strange trees were, and showing me what their nuts looked like and how to eat them. I had passed people gathering something on the ride in, and now I knew what it was.

Pehuen nuts are about the size of a finger joint, incredibly fire-resistant, supposedly high in protein, and taste more or less like other pine nuts. They were a main part of the locals’ diet, which made sense as I looked around and saw them everywhere. I picked up a few and tried preparing them in three ways: boiling, roasting on my camp stove, and roasting wrapped in aluminum foil next to a fire. The last approach worked best, though baking or possibly steaming would probably be better. This being Argentina, though, I should have built a fire and put them in an old tin can. 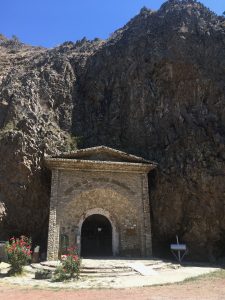 It was surprisingly cool in the morning, so I got a late start back around the lake, and was further delayed collecting a bag of araucaria nuts to experiment with later. The road along the Rio Aluminé was dirt, but in relatively good shape and slightly downhill, so I proceeded at a decent pace, then made much better time in the strange island of asphalt roads around the town of Aluminé. I stopped briefly at a shrine to Ceferino, some kind of local saint, then reached town mid-afternoon. 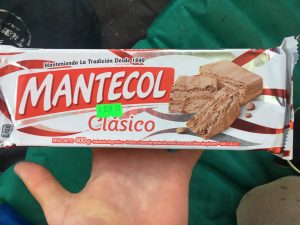 It was hot, and this would be my last civilization for awhile, so I half-napped in the park while waiting for the stores to open. Sitting up and looking around I was surprised to see another bike tourist at the next table over. He turned out to be Francisco (or Pancho), an Argentinian man who had been touring for three years non-stop. He was headed north now, criss-crossing the border and hitting pretty much every pass along the way. Because he was traveling year-round, he had even more gear than I did, including two panniers of winter clothing he hadn’t opened in months. I had hoped to split the 200-ish kilometers between Villa Pehuenia and Paso Tromen into two equal portions, but delays talking to Pancho and finding the ATM in Aluminé (the shiny bank building is buried in a dirt-road residential area), I only made it a few kilometers farther, camping near sunset at a popular spot along the river. 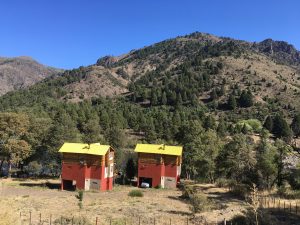 I knew I had a long haul the next day, so I managed to get a reasonable start. The river road was paved until it crossed a bridge, then turned to dirt and added regular rollers, which slowed my progress. Still, it was not bad as far as Argentinian dirt roads go, so I was in a decent mood as I made my way south. The road eventually leaves the Aluminé where it bends east, climbing around 1500 feet before dropping a similar amount to the junction with the Paso Tromen road. This could have been ugly, but I found that a road crew was working at that very moment to pave it. The fresh asphalt was incredible, and even the surrounding dirt was freshly-rolled, so the climb was much less of a struggle than I had feared.

Reaching the pine-treed summit, I stopped in one of the Argentinian roadside shelters (for hitchhikers?) to drink some water and have more sausage and bread. A nearby worker, toiling away by himself at some task and apparently bored, came over and offered me water, asking about my trip. He seemed to think it was a bit crazy, preferring to head into the mountains more sensibly by horse. I eventually continued, leaving the construction to be faced with the original washboard dirt for awhile, then finding more good pavement on the descent to the Tromen junction.

The heat was intense at this lower elevation, and the roadside springs I had seen to the north had disappeared. Too impatient to deal with my overused and half-clogged filter, I dipped my bottles straight into the river, despite knowing that it came from a large lake and passed all sorts of livestock. I had become used to drinking some pretty sketchy water, and figured one more time wouldn’t hurt. (I paid with a day of diarrhea 2-3 days later, but… worth it.) A herd of motorcyclists and the odd tourist passed me while I was at the river, but the road seemed pleasantly quiet. 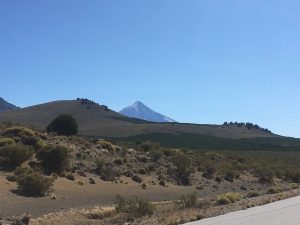 The rest of the ride went much as I had expected, though with the addition of a discouraging headwind. Lanin first comes into view soon after the junction, its cone divided almost perfectly into white and black halves by the edge of its southeast glacier. Most of the climb is gradual and well-paved, and would have passed easily in the morning before the wind and heat. The pavement gives out at the park boundary, though, leaving 10 kilometers of unpredictable dirt. The first few kilometers were freshly graded, and I though my work was almost done; I stopped for more river water, and thought better of scolding a family collecting araucaria nuts, which is clearly forbidden in the park. The last part, though, had not been improved, and was a sandy washboard that, with the headwind, kept me in my lowest gear despite barely being uphill.

Reaching the park office, I thought I would be a good visitor and register for the climb. He told me that I should come back at 8:00 the next morning (ugh, but okaaay…), that I needed crampons, ice axe, and mountain boots for the obviously-dry hike up the northeast side (yeah, got ’em, whatever), and that I needed a radio. A what?! Yep, I would need a radio to fill out the papers (I should have just lied and asked “what frequency?”), he did not have a loaner like the nice guys at Domuyo, and there were none for rent. Still in “good visitor” mode, I sulked out and rolled over to the neighboring campground, where I paid actual money for no showers, no electricity, and a crappy table. I stewed for awhile, then decided “screw you guys, I’m walking up and down your stupid mountain.”

Dozens of these attached to the rock