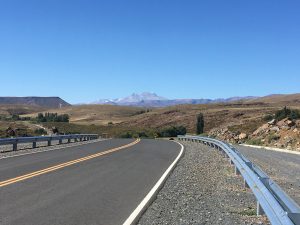 The next peaks on my list were Domuyo and Tromen, two ultra-prominent extinct volcanoes in northern Neuquen, well to the south. I had suffered enough on Argentina’s horrible dirt backroads, so I decided to stick to Ruta National 40 for the commute. If I could count on anything being well-paved, it would be the main north-south highway in the area, and as this is not Chile, the traffic should be both moderate and friendly. Little did I know… 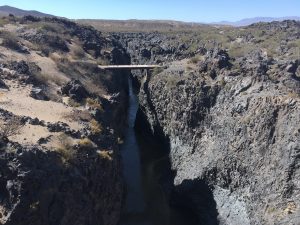 Things looked good rolling out of Malargüe, and I even got a wicked tailwind on the descent to Bardas Blancas, where I stopped for water and talked to an Australian prospector on a motorcycle. Unfortunately, it turns out that about fifty miles of RN 40 between Bardas Blancas and Barrancas are some of the worst ripio I have encountered. Everywhere vehicles could go fast, it was savage washboard; elsewhere, it was either mounded-up loose gravel or jarring rocks. There was some interesting geology as I entered the volcanic region, including a cool basalt slot canyon, but it was miserable work. I had hoped to get to Chos Malal in two days, but instead had to camp one night in an abandoned building in the middle of the dirt section, then again in Buta Ranquil, a miserable little town east of Tromen. 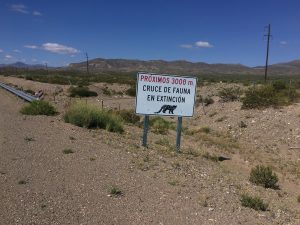 By the time I descended past the Tromen turnoff on my way into Chos Malal, after fighting a headwind for much of the day, I decided that I would only do Domuyo. I woke up in the dark around 6:00 the next morning, heard the same wind blasting away from the north and east, and decided to take the day off. It would be a headwind on the way to Domuyo, and the Chos Malal campground had decent WiFi and actually hot water. I had hoped to fix my rear brake, but my day off coincided with Carnaval, a holiday falling 38 days before Easter (WTF?) which I had never heard of, but which is important and widely observed in Argentina. Most businesses, including the bike shop, were closed, so I had plenty of time to sit around town in the wind, which kept up all day. 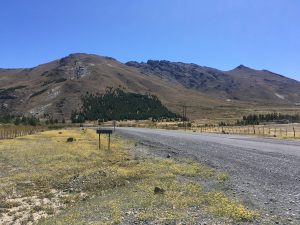 The next day dawned calm, and after waiting for the bike shop to open so I could buy new brake pads, I started late for Las Ovejas. Though it starts with a 2000-foot climb, this stretch is actually a pleasant ride, with good pavement and little traffic. Nearing the first of two passes on the way to Andacollo, I was stunned to see… actual pine forests! I had not passed a single naturally-occurring pine tree in the mountains since arriving, and seeing something so proper and familiar was surprisingly moving. Dropping down the other side, I passed some cars stopped at what turned out to be a gushing pipe attached to a road-side spring, then stopped when I saw a car parked next to some volcanic cliffs. Looking around, I quickly spotted climbers at the base of a sport route, and stopped to watch the leader slowly make his way to the anchor. Trees, water, climbers… this was looking good. 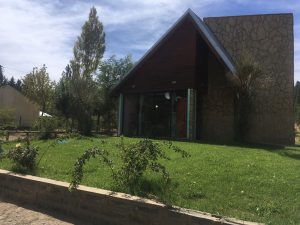 From Andacollo, I crossed another pass between two river valleys, then cruised up-river to the town of Las Ovejas. It was only 5:00, and Varvarco was just twenty-some kilometers farther, but the pavement ended, and I did not want to spoil a good day. Instead, I pulled into the municipal campground, where there was no one to collect my money, and bought some perishables for dinner. I then stopped by the tourist office, which had slow WiFi and very friendly staff, who gave me a schematic map of the area and, better still, an up-to-date map of Neuquen showing which roads were paved. It seems like there has been a big, recent push to promote tourism in the region, as the tiny herding towns of Las Ovejas and Varvarco, both on a dead-end road in the middle of nowhere, have shiny, modern tourist information offices. 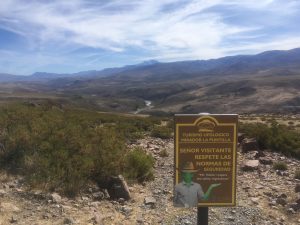 The next day, I was immediately thankful that I had not continued to Varvarco, as the road turns to washboard just north of town. A couple of miles in, I passed a grader in the middle of repairing it, and eventually moved over to the freshly-graded side. A truck pulled up next to me while I was stopped for some reason, and a woman in back asked if she could take my picture. I couldn’t see any reason why not, and was surprised when she produced a DSLR with a massive lens. It turns out that Estrella and her fellow passenger were working on an article for a tourist magazine, scheduled to come out in October. I spent ten minutes or so posing for photos, then continued my slow progress north as she sprinted ahead to get some action shots. This is not how I expected to get into a magazine… 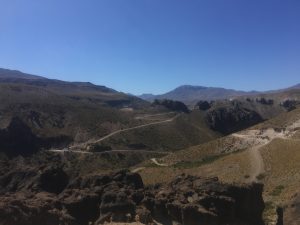 The road improved a bit after Varvarco, where it sees less traffic. Biggar describes a “rough track” leading from Aguas Calientes to the Domuyo trailhead, but there is now a well-graded dirt road heading there from about three kilometers earlier. I ran into the magazine crew there again, posing for more photos, then cranked out the climb to the trailhead around 2500 meters. I was surprised to find some sort of refugio or ranger station, and was just getting ready to inspect it when a buff military guy came out to ask what I was planning. I told him I wanted to climb Domuyo, and after ascertaining that I had warmer clothes than my bike shorts, he had me fill out a liability waiver and emergency contact form, and loaned me a radio (they do that sometimes down here). I asked if I could camp in the parking lot, and he invited me to store my bike in the shed, and sleep on a bed in the infirmary. The three guys stationed there had running water, electricity, and a (shockingly cold) shower; I was living large. I set my alarm for 6:00, cooked my usual glop, and tried to sleep early. 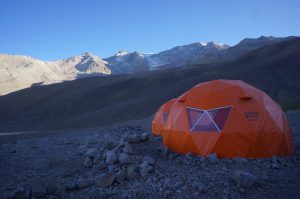 My alarm got me halfway awake, and the bed collapsing finished the job. I loitered a bit in the luxurious electric light, then started off up the trail just after headlamp time around 7:00. I crossed a completely unnecessary bridge, then continued a surprisingly long ways up the south bank of a river through talus and old moraine, following the best of several cow-paths. I reached the supposed normal base camp at a lagoon and, as promised, I radioed base camp to reassure them that I had not fallen off the trail. I thought I had seen some tents slightly higher, and soon realized they were not tents, but three semi-permanent dome structures: a locked kitchen tent, plus dining and sleeping tents. It turns out that someone (the army? Tourist ministry?) has recently installed a refugio around 3000 meters in which you can pay to sleep. I found my (free) accommodations in the army shelter much more comfortable and sensible. 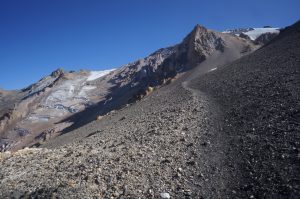 There are two main trails above the refugios, and I chose the right one, which looked more like an up-trail. Domuyo would be every bit as miserable as Sosneado without the trails, but with them it was actually fairly pleasant, if long. The route climbs a ridge on the mountain’s south side, so it is surrounded by glaciers on both sides. The southeast glacier appears to be the largest, descending far into a valley leading back toward Chos Malal. From the ridge where it finally comes into view, the route climbs what can only be described as class 5 dirt. If it were not for several hundred feet of hand-line, this would be moderately dangerous without snow, as it would be hard to stop a fall. Thanks to the line, it is merely strenuous, since I did not have an ascender and had to half-drag myself up hand over hand. I was grateful to have the mountain to myself, because it would be foolhardy for more than one person to be on the line at once given the amount of debris inevitably kicked loose. 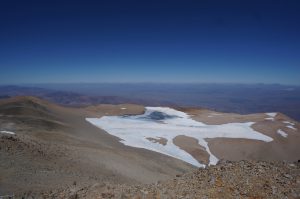 Above the line, more steep trail leads eventually to the small, shallow crater, home to a small, half-frozen lake. From the summit, I could see other volcanoes in all directions, most of which I could not name. There was of course Tromen back to the southeast, looking brown and uninspiring; I was glad to have skipped it. To the southwest, I could make out two glaciated volcanoes toward the border, one of which may have been Lonquimay. I radioed down to say I was at the summit, hung out for awhile, then headed down. 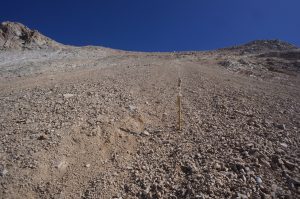 It was slow going until below the handline, where the trail is low-angle and soft enough to plunge-step through much of the scree. I took the other trail down toward the orange tents, finding that I had guessed correctly on the way up: this was definitely a down-trail. I skipped past the refugio tents, then stopped at the lagoon to grab some water. Four local men passed me as I was there, headed up to the refugio for the night. Evidently the army guys had told them about the crazy gringo out dayhiking the peak. 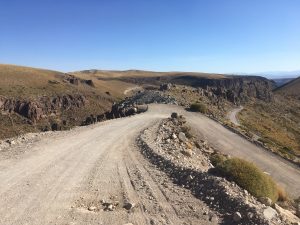 I hung out talking to the head army guy for awhile, then decided I needed to take off. If I made it to Varvarco that evening, I could get back to Chos Malal the next day. It was downhill and not far, but there were two climbs where I knew I would be pushing my bike. Before I left, the army guy gave me a bag full of apples and pears, a kilogram of polenta, and some crackers. It was a mixed blessing, since calories are always welcome, but I was not looking forward to having an extra five pounds or so in my trailer. The forty or so kilometers back to Varvarco were as grim as I had anticipated, and I got there right around dusk. The municipal camping was once again unguarded, and I even had it to myself. I cooked a late dinner, then almost immediately passed out.

I made it to Las Ovejas by around mid-day, where I bought a bunch of ham and cheese to go with my crackers on the ride back to Chos Malal. It was hot, but I still enjoyed the smooth and quiet pavement, and there was plenty of water along the way. The spring between the two passes was downright crowded, with one guy even pulling up in a pickup to fill several five-gallon jugs from the pipe. This spring seems to be a tourist attraction in its own right. 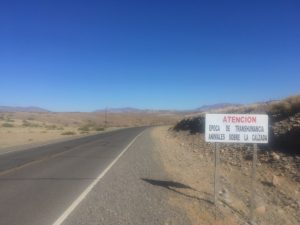 I saw several signs warning of an “epoca de transhumancia” (epoch of transhumanism?) on the road between Chos Malal and Varvarco. This had me slightly concerned, but fortunately I was not accosted by any transhumans during my time in the area. The tourist information sign between Las Ovejas and Varvarco was not enlightening, merely saying that “the transhumance is a form of extensive livestock production.” Anyone have a clue?

How far are they taking it?

I could improve this if they paid me

That does not help

My bike got tired

West from high up

Glaciers and volcanos to the NW

One response to “Volcan Domuyo”