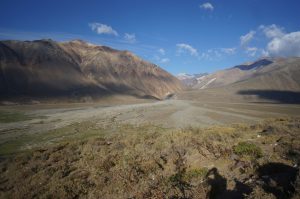 Volcan Overo was supposedly an easy peak, with the remains of a mining tram and an old road leading most of the way to the summit. I ate breakfast while the army boiled more water in tin cans around a fire, then took off up-river by bike. Since most people go no farther than the old hotel, the road improved dramatically, and I actually enjoyed riding for the first time in awhile. A bridge has been washed out higher up, but the ford was only knee-deep, and without a trailer I could keep my bike dry. 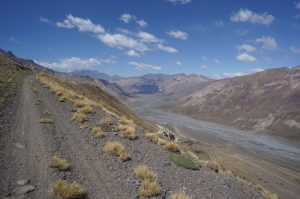 While it was mostly smooth riding to the old mining facility, the road up the mountain was more than I could handle. It is popular among dirt-bikers, so while most of it is not steep, it is too loose to be easily rideable. I stashed my bike behind one of the mine buildings, put the front quick-release in my pack to deter thieves, then took off walking. I started regretting my decision to walk when the road turned rideable again, but it was probably the right choice. The impatient dirt-bikers had cut a lot of the flat switchbacks, and I was able to do the same on foot. 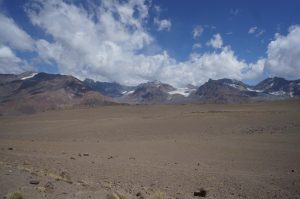 It was insanely windy, and I had to stop behind some boulders to put on my down parka and goggles. I reached another cluster of buildings on a flat spot in the early afternoon. One was being used as a refugio, and was still in decent shape, while the rest were missing roofs and doors. I sat out of the wind for awhile, then continued up the road. However, I still had a long traverse to reach the summit, and a long trip back to base camp, so I eventually gave up before the end of the road. Like Tinguiririca, Overo is a large mound surrounded by more impressive neighbors. To the north lie several (unnamed?) peaks with large glaciers, while Cerro Sosneado dominates the view to the south. I checked out the latter on my way home, scouting for the most likely route. 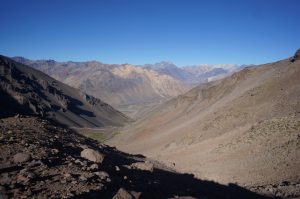 With no army to disturb me, I got a good night’s sleep and was off by first light the next day. From the refugio, Sosneado’s summit is five miles away and 10,000 feet above — a big climb, but not unreasonable. Biggar’s route description for Sosneado, “easy by the northwest ridge,” is clearly nonsense, since the peak does not have a northwest ridge. However, I approached up the valley to its northwest, and found a few cairns and a couple of camps. 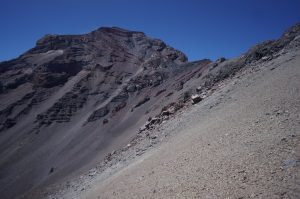 Above the upper camp, I reached a saddle between the Atuel valley and a buried glacial remnant to the east, then turned up a northern spur of the peak’s west ridge. I found a bit of a use trail at first, but that soon disappeared, and I was left to fight the choss in its original state. I wasted some time trying to climb a large choss-tower before bypassing it to the left, then fought my way farther up the ridge. This appears to be the correct way to the summit, as it joins the west ridge east of an obnoxious and tricky-looking subpeak. However, it is a miserable slog up every kind of unstable choss. Just below the subpeak, I wrestled with a flat rock until it was stable enough that I could sit on it with care, then almost fell asleep on it. I was less than a mile and about 1500 vertical feet from the summit, but I just didn’t have it in me.

On the way back down, I decided to cut my losses and head out the next day. I had plenty of food to make the two-day trek to the plane crash (two days are necessary, because the Rio Atuel can only be crossed in the morning), but I had had enough. I lacked the will for a thigh-deep stream crossing and a long hike with an overnight pack. The wind that had tormented me the whole time finally died down the next morning, and even turned into a bit of a headwind as I neared El Sosneado and pavement. I stopped for a ham sandwich at the gas station, then rode back to Malargüe to recover and fix my bike. I had broken yet another spoke on the awful dirt road, so I figured it was time to have the wheel completely rebuilt.

Back of choss tower