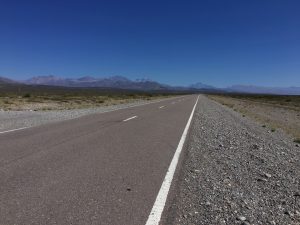 Though the Sosneado valley was the wrong direction from Malargüe, I had several reasons to visit. First, it is home to two ultra-prominence peaks, Cerro Sosneado and Risco Plateado, only a few miles apart on opposite sides of the Rio Atuel. Second, Biggar’s guide describes the valley as scenic and a good spot for wildlife-viewing. Third, the abandoned hotel near some hot springs sounded like a great place to camp for a few days. My visit to the Atuel valley turned out to be rewarding, but not for any of these reasons.

It looked like about 110 kilometers to the hotel, the first fifty on pavement, and the rest on dirt for which, according to Biggar, four-wheel drive was “not really necessary.” Since several of the roads he described as requiring it had been moderate by bike, and since I would be heading west and up-valley, presumably with the afternoon upslope winds, I figured it would be a straightforward ride. I rolled out of the nice Malargüe campground late, making it to the gas station town of El Sosneado for a late lunch. The attached convenience store had WiFi, and the other patrons were eating some nice-looking ham sandwiches. I was not smart enough to realize that they had bought them at the butcher’s next door, so I ended up paying too much for a crappy gas station sandwich, a grapefruit soda, and some “Super Roly” alfajores. These were the kind I had bought way back in Potrerillos, and I wanted to see how they tasted without the mold. They also have a ton of calories.

I took my time over lunch, downloading podcasts and taking care of business before an expected 4-5 days away from civilization, then grabbed some water and headed up the road. I soon found that while four-wheel drive might not be necessary, the road was classic high-traffic Argentinian dirt, badly washboarded everywhere it wasn’t too rocky for people to drive quickly. I saw some compact cars, but the drivers had to be slow, careful, and indifferent to their cars’ suffering. Also, unlike everywhere I had been in the Andes farther north, the afternoon wind came from the west. Things were looking grim. 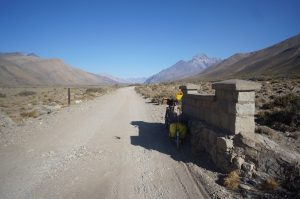 I had slogged about half the distance, and was sitting on a rock debating what to do, when a pickup stopped and the driver asked if I needed anything. I said I was fine, and we talked for a bit while his wife looked on from the passenger’s seat, and several small children waved from the back. They turned out to be heading back to Buenos Aires after a family vacation that seemed to involve an insane amount of driving. As he was about to leave, he asked if I wanted some water. I was low, and not looking forward to filtering from the silty river a few hundred yards away, so I said yes. From a cooler in the back, he produced not just water, but a 2-liter bottle of ice and a beer. That made my decision easy: I backtracked a hundred yards to a ruined barn that served as a bit of a windbreak and pitched my tent. Hopefully the wind would die down overnight. 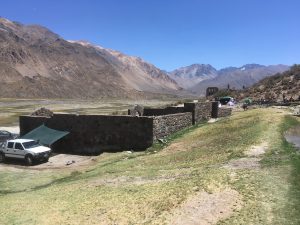 It did not. I folded my tent in the wind (I’m getting good at this), then fought another thirty kilometers of washboard and headwind to the hotel and hot springs. Both were disappointments: the “hot” springs were lukewarm at best, the hotel contained an unpleasant amount of trash and graffiti, and both were too crowded for my taste. I found a shady spot outside, where I sat to have a random daytime meal and read a bit on my phone. My leisure was interrupted several times by the wind blowing things off of where I had hung them from my bike into a nearby mud puddle. 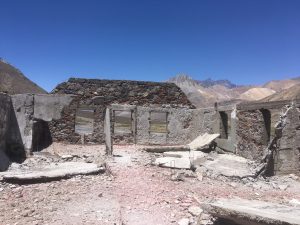 I was not loving life at this point, trying to figure out how best to spend the time and food I had invested in this excursion, when an older man approached and asked if I wanted to share his food. If you know me at all, you know that I would never decline such an offer. I then spent most of the afternoon hanging out with a pair of older couples from Malargüe, eating their steak, bread, and home-grown peaches, and exercising my still-pathetic Spanish. As usual, the men did most of the talking, but as they left, one of the women gave me a bag of bread, meat, and cheese for the road.

Biggar mentions a refugio a few kilometers up the road as a base camp for Cerro Sosneado, and I almost passed it by mistake before a group headed downstream clued me in as I was getting water from a stream. The building looked very military, and there were a couple of cars outside, but no one was home, so I threw down my things in one of the rooms and made myself comfortable. While I was in the middle of figuring out how to spend my days in the valley, several vehicles pulled up outside and, a few minutes later, guys in camo opened the door.

This is where things would have started going badly in the States, possibly involving extrajudicial proceedings, but fortunately I am in Argentina, so the soldiers just said “hi” and moved in around me. Representatives of the local mountain regiment were out for a training exercise and, perhaps as a side-hustle, were guiding some tourists to the Uruguayan plain wreck made famous for the subsequent cannibalism by the book (good) and movie (bad) Alive. I had read the book at an impressionable age, so it was exciting to be so close to the events decades later.

These being Argentinians, the first thing they did upon arriving was to make maté. I don’t particularly like the taste, which is something like strong, sour green tea, but I accepted a bit when offered, and have to admit that the system for drinking it is genius. It is sipped through a straw from the bottom of a small cup, so the leaves float on top and do not need to be filtered out. Hot water is poured into the cup a bit at a time from a thermos, so every sip is both hot and freshly brewed. If it gets weak, more leaves can be sprinkled in. I am picky about the temperature of my coffee, so I may have to try this with coffee grounds, though I promise not to be that guy who comes back from Latin America with a maté cup preaching its virtues compared to coffee (caffeine with the other chirality, maybe?).

The Ejercito Argentino are also a bunch of cowboys, so instead of boiling their water over a portable stove as I had done, they gathered wood, built a bonfire, then set a half-dozen old tin cans full of water in it. When one got hot enough, its owner would reach in with a leather glove to pluck it out and pour it into his thermos. A bit later, the really cowboy troops arrived leading a string of mules, which they would take up to the crash site. Not only are they amazingly capable on scree and talus, but mules are much better than humans or vehicles at crossing the area’s treacherous glacial rivers. Talking to one of the troops, I learned that the Rio Atuel crossing on the way to the plane is thigh-deep at mid-morning, the safest time to cross. I was pretty sure I could do it with a stick for balance, but… it was something to think on later.

The tourists seemed to be associated with a Buenos Aires law firm, so they mostly spoke a bit of English. One, a law student, spoke it particularly well and was eager to practice, so I had a translator and English conversation partner for the evening. He invited me to share their meal, which I eagerly accepted, though I was not yet hungry again. At this rate, I would leave the valley with more food than I brought in. Another of the tourists was well-off enough to have taken his daughter skiing at Aspen, which was shocking to me even in pre-inflation Argentina. Apparently I was hanging out with the 1%. 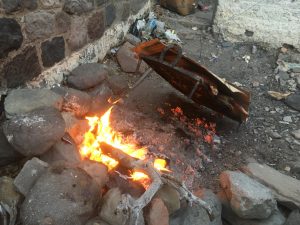 A bit before dark (between 8:00 and 9:00 in this bizarre time zone), the grill-master took over the fire to begin the asado. They had attached a whole lamb (or kid, possibly lost in translation) and a substantial portion of a cow to a large iron grill, which they strung at an angle slightly downwind of the fire next to one corner of the building. With the grill properly hung, they tied an old cardboard box over the meat. With the back-end of the lamb on top and closest to the fire, and the beef on bottom, everything would cook at the proper rate in this arrangement. However it would take several hours, meaning we would eat around midnight. This was good news for my appetite, but bad news for my intended alpine start. 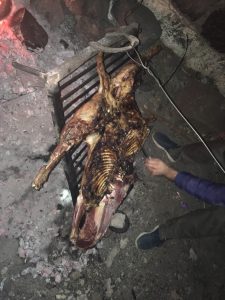 Before the asado, there was a picado, i.e. appetizer, consisting of a large pile of commissary cheese and homemade sausage. There is apparently some rule about when one is allowed to start eating it, so I stared hungrily at it for most of an hour while waiting for others to dig in. Finally, sometime after 11:00, the meat was ready. Rather than grabbing plates and forks, everyone grabbed rolls out of a giant sack, tore them open, and cut off slices of meat with their knives, impressive 5-6″ things sheathed under the belt in the small of the back. Sawing away with my tiny, dull Swiss army knife, I felt even less manly than usual. The meat was delicious, and the supply was regularly refreshed as the grill-master chopped off newly-done parts.

Butchery complete, we wandered off to bed sometime around midnight. The tourists and other soldiers had taken the other rooms, while I was in with the cowboys. They spoke no English, and their Spanish was fast and hard for me to understand, so we did not talk much. While I topped off my increasingly leaky air mattress, they unrolled their blankets, put saddles at one end and boots at the other, and quickly went to sleep. There was no way I would manage the 3000-meter climb of Cerro Sosneado the next day, but fortunately I had other things to do.