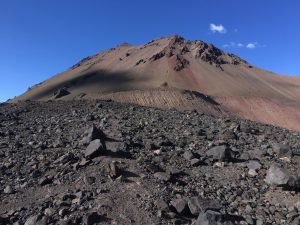 Biggar’s guidebook claims that the Morado Valley contains some of the most “alpine” climbing in the high Andes. This seems to be true in both positive and negative ways: the rock is a bit more solid, and there are large and interesting glaciers, but the glaciers are also in rapid retreat, leaving behind a mess of loose rock and lateral moraines. I went in hoping to climb Loma Larga, Cortaderas, and Punta Italia, three of the highest and most interesting peaks. However, I ended up sitting in my tent reading for a day, hiking the much lower and easier Cerro Union, then giving up on the approach to Loma Larga, a three-mile slog up loose rocks leading to a nasty-looking icefall. There may still be good summer climbing on these peaks, but I am coming to the conclusion that the high Andes are best in the Spring, when the worst of the debris is covered with snow, and before large penitentes have formed on the glaciers. 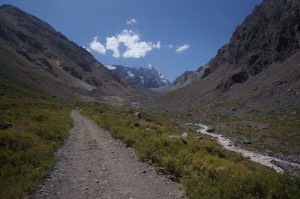 Though it involved a bit of pushing on the way up, and foot-dragging on the way down, it was worth the effort to get my bike to around 2600 meters on the road up the Morado Valley. The upper part of this road, which leaves the current mine road just before the gate, is blocked off to cars, though some appear to reach it from another route within the mining area. I stashed my bike at the end of the drivable part, then continued on foot as the route gradually turned into a trail, ending at Laguna El Morado. Though only at 10,700 feet and 33 degrees south (the latitude of Los Angeles), the lake has a glacier at its far end, and is full of small icebergs in the morning. Though spectacular, it is unfortunately a disgusting brown rather than the expected glacial blue-green. 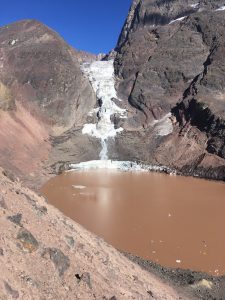 I set up my tent in the space with the best wall and least horse manure, then read Farthest North on my phone while listening to the regular icefalls on the other side of the lake. My plan was to climb Cerro Morado the next day, supposedly a moderate scramble. However, looking at Biggar’s vague and terse route description, my photo of a map from the nearby Monumento Natural, and the mountain itself, I could not figure out a moderate line. Maybe the glacier had completely changed, or everything would make more sense in the morning. 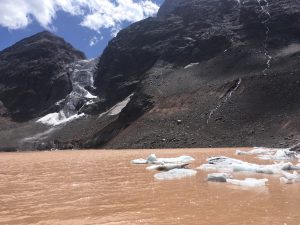 I woke to find a fresh batch of ice cubes in my lake, but the route was no clearer than the previous afternoon. An unbelievable lassitude came over me, after breakfast, and I decided to sit in the tent and read for a bit instead of starting for the peak. “A bit” turned into a few hours, after which I decided I needed some hot chocolate. I thought about hiking the use trail up Cerro Union, but decided I would rather listen to the icefall and read about Nansen’s journey over the polar ice. Before long, it was time for dinner and bed, with nothing accomplished. At least the need to go and get more water for hot chocolate had forced me to put my pants on. 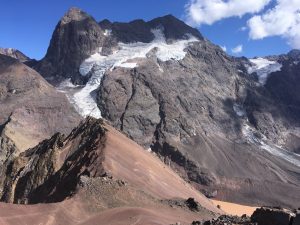 I was little more motivated the next day, but at least managed to make the short hike up to Cerro Union. The summit had a good view of Morado nearby, and Cortaderas and Punta Italia across the way (Loma Larga is hidden). I though that I could see a possible route up Morado, though the lower part looked slabby and difficult, and the glacier crossing higher up seemed dubious. The route to the Loma Larga-Cortaderas col looked even more questionable, with several miles of glacial debris leading to a badly-broken icefall. I sat around for awhile taking pictures, then returned to camp, where I wasted the rest of the afternoon. Some cowboys or goat-herds came by, one with an ice axe and technical tool on his pack for some reason, but they left after a short time. 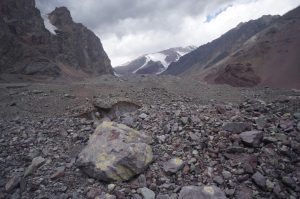 The next day, I had enough motivation to at least pack up camp and start toward the Loma Larga-Cortaderas col, hoping to find a camp spot somewhere near where the glacier branches, then climb them both from the saddle the next day. I sketched my way down the old lateral moraine, then hiked up where the glacier used to be, finding an old tent spot, but no other signs of human passage. I admired the twenty-foot-high tunnel where the river emerges from the glacier, then made my way up onto the ice. The glacier is mostly covered in rock nearly to the point where it splits at the valley head. Since the rock is all sitting on moving, melting ice, it is permanently unstable. It is also uneven, with many ridges and small lakes. I hiked about a mile up the glacier with my overnight pack, then gave up. Not only did it look hard to find a tent spot, but the icefall looked like an enormous pain to climb. The best summer route up Loma Larga nowadays may be to follow the scree-ridge from the Loma Larga-Meson Alto col. Do locals still climb these peaks?

I hiked the trail back down to my bike, then camped for another night. I still had plenty of food, and it would have been a long day to return all the way to San Jose. This valley had been a disappointing bust, and I was looking forward to getting back on pavement and trying somewhere else.