Tres Cruces Norte is the lowest of the three Tres Cruces peaks, being just over 6000 meters, with not quite enough prominence to count as a peak by whatever definition is used in this part of the Andes. While I had in theory left myself the option of climbing Tres Cruces Central, I knew I lacked the energy and will. Even the pathetic 2500-foot climb to Norte, plus a downhill hike and bike back to the Orange House, was about all that I could handle at this point. Fortunately it was a much more enjoyable peak than Sur, with no loose talus, a bit of almost-scrambling, a couple of interesting lakes along the way, and a great view of the higher Tres Cruces peaks to one side, and the Salar de Maricunga to the other. It was kind of a weak ending to my Atacama trip, but held just about the right amount of challenge and reward. 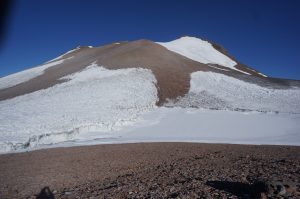 From my camp below the Central-Sur saddle, I made a long, mostly level traverse north around Tres Cruces Central. There was no established path, and no best or most level path, but the side-hilling was not so bad. However, as soon as I started climbing to the Central-Norte saddle around 5700m I was painfully slow, almost to the point of wanting to turn back. The final 1000-foot climb to the summit looked like a slog, so I spent awhile sitting next to the frozen lake at the saddle, eating Mantecol and psyching myself up. 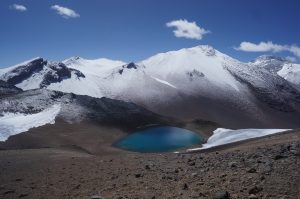 The climb out of the saddle turned out much easier than I had expected. First, I found a switchback boot-pack up the sand and scree. Second, I was able to kick steps up some rare non-penitente snow. Far sooner than I had hoped, I found myself at the 5950-meter sub-summit. The traverse to the true summit, at the far end of the plateau a bit under a kilometer away, took longer than it should have, but I was cheered by views of a liquid lake, and by a bit of solid rock. I may have even used my hands in one or two places. I am curious why some bodies of water remain liquid in the Atacama, while others freeze. Somehow the tiny tarn at 6000 meters between the two southern peaks was liquid in the morning, despite it being quite cold there, while the larger lake at the northern saddle was frozen. Perhaps contact with a neighboring snowfield or glacier makes just enough of a difference to freeze a high lake, while the solar intensity so close to the equator keeps water liquid even though air temperatures are (I think) below freezing all day and night. 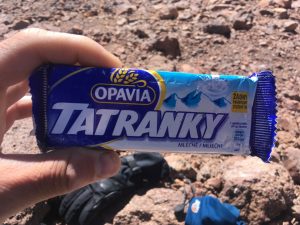 I had many reasons to take my time at the summit: this was my last Atacama peak this trip, and possibly ever; it was sunny and not too windy; the views were great in all directions; there was a summit register; and previous climbers had left about 500 calories of candy. In the interest of “picking up litter,” I ate all the candy, including some “tatranky” that I only later realized later had expired in 2012. Oh, well, calories are calories. 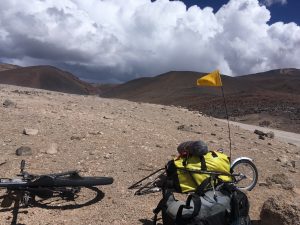 After signing the register, I said “goodbye” to the Atacama, and took my time returning to camp, then packing up and slogging down to my bike. Fortunately I had left a waypoint where I stashed it, because I took the wrong one of the many vehicle tracks. It was crazy-windy by the time I reached it, and clouds were covering the higher Tres Cruces peaks, so I opted to spend another night in the Orange House. It was over 120 miles to Copiapo from there, but also over 12,000 feet downhill, so it seemed like it would be a reasonable one-day ride.

Tres Cruces Central from the climb to Norte

Central and Sur from Norte