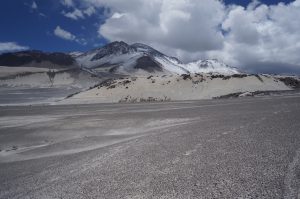 [There is still a fair amount of catching-up to do, but with shorter excursions and more civilization, that should start happening. — ed.]

El Muerto is a high 6000m peak next to Ojos del Salado, sharing much of its road approach. Its slightly lower elevation makes it much less popular, which counts as an advantage to me. The Alpenvereinskarte shows routes up Muerto, Ojos, and Cerro Medusa from the Muerto-Ojos saddle at 5500m, so that seemed like an efficient base camp. In the end I only tagged Ojos and Muerto, the former via the standard route, and used a base camp in a sheltered dell around 5450m with easier water, but it was still a good route choice. 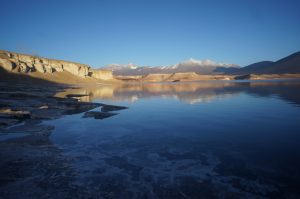 Waking at a reasonable hour at Laguna Verde, I hummed a little Bach a bit more happily and loudly than necessary as I packed, hoping to exact the morning person’s passive-aggressive vengeance upon my late-talking neighbors. I could have backtracked a few miles to top off on Agua Dulce water, but (1) I was suck of its seaweed taste, and (2) I thought I had enough to reach my intended camping area, which seemed likely to have some kind of water. I took some photos of the sunrise scenery near the lake, said “good morning” to the Germans as they headed toward Mulas Muertas for acclimatization, then began the short ride. 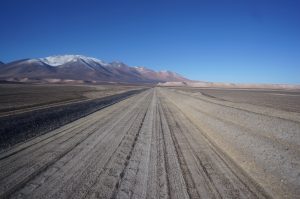 Road to the Refugio Murray

I followed the pavement for a bit, admiring the fresh snow in all directions, then took off on a dead-straight dirt road headed for the refugio at the base of all Ojos del Salado climbs. It was good dirt by Atacama standards, but still the usual washboard, so I spent my time hunting left and right for the least-bad path. Most of the way there, I turned off on a corner-cutting road up the wash. It was an almost unridable mixture of washboard and sand in this direction, but I was still moving at a fast walk, and reasoned that it would be slightly faster in the other direction, and therefore was worth riding. 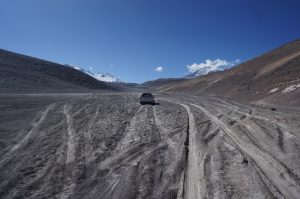 I found the main road from the refugio no better when I finally joined it, but the same logic still, so I gradually ground my way toward the peak. Where the “road” crossed the wash and spread into a half-dozen tire tracks made by drivers desperately struggling with the sand, I was amused to pass an SUV stuck axle-deep. I had to push my bike a bit, but that was far easier than pushing a car. I finally switched from cycling to walking where the road left the wash. In retrospect, it might have been more efficient to keep going, since there were numerous ridable sections above, and even one downhill, but the climb looked like it would require a lot of pushing above 15,000′, and there were some convenient rocks in which to hide my bike. The Russians passed me slightly higher up, racing by on a side-road in their Hilux, with the woman driving and not even slightly slowing down to acknowledge my presence. 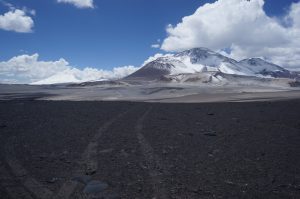 El Muerto, with skiable Incahuasi behind

Rounding a bend, I was impressed to see the amount of fresh snow on Incahuasi and El Fraile. Both peaks had been nearly dry when I climbed them, but the former was definitely skiable now. A more polite driver offered me a lift here, but their truck seemed full, and I was close to where I would leave the road, so I politely declined. The road has several branches here, cutting progressively lower to avoid an un-drivable washout; I was able to cut directly across on foot. 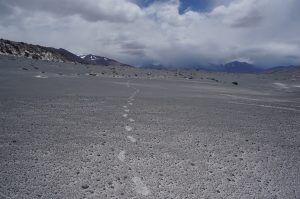 The lonely path I tread

I finally left the road where it wallows through another sandy wash before it turns right and heads for the Refugio Atacama. My path started out as a cross-country slog through sand and boulders, but I soon found some old footprints, then a set of tire tracks following occasional cairns. These made for slightly easier walking than the surrounding desert, so I followed them past rocks that seemed to have been sandblasted by the prevailing winds. Where they turned toward Ojos, I continued up a faint wash, then contoured around toward a point just below the Ojos-Muerto saddle. I dropped slightly into the drainage to its northwest, where I found a nice flat-bottomed area. It was somewhat sheltered from the wind, contained a couple of clear penitente-melt streams, and had numerous flat spots. I chose one to be my home for the next few days, and set up camp just in time to hide from the afternoon thunder-snow.

(I wish I had had appropriate “Death Mountain” music on my phone.) 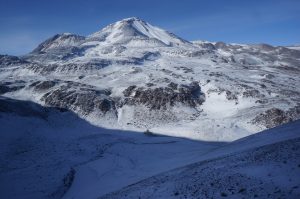 This was a west-facing route with not a whole lot of elevation gain, but I also expected the usual afternoon weather, so I got started at a respectable hour, leaving my tent before the sun reached it. Though it was cold, I was surprised to still find some liquid water making its way across the sand-flats from various buried penitentes. I turned to watch the shadow descend snowy Ojos del Salado as I climbed, highlighting the well-trod switchbacks of the standard route on its sandy north face. 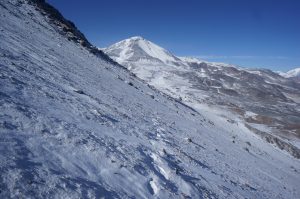 El Muerto does not see enough traffic to have such a path, but I did eventually find an old boot-pack after traversing most of the way around the prominent subsidiary peak to its west. One advantage of the steady precipitation is that it stabilizes the ubiquitous sand, particularly in the morning when it is frozen. This made the ascending sidehill somewhat more bearable, and I hoped it would have softened enough on my descent to allow for fast plunge-stepping. Past the subpeak, the route switchbacks up toward the saddle, then heads through a mixture of sand and rocky outcrops to the summit. The slope to the saddle was unpleasantly loose, so I instead headed left through the rocks, aiming directly for where I thought the summit should be. After a bit of route-finding to keep things class 3, it was mostly a class 2 meander. I found occasional footprints here and there, but since there is little traffic and no obvious “best” route, one is largely left to find one’s own way. 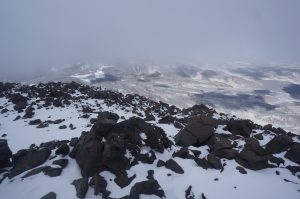 Slowly, oh so slowly, I ground my way to the summit, which is one of several equally-high piles of rock protecting a small icefield in what may be a shallow crater. The clouds reached the summit at almost the same time that I did, but I had already seen most of the surrounding peaks on the way up, with the exception of a clear view of Incahuasi and El Fraile. I sat around looking at the summit glacier for a few minutes, then headed back for camp before it started raining or snowing. I took a higher and sandier line, heading closer to the saddle before dropping down, then followed the bootpack on the long sidehill toward camp. The ground unfortunately had not softened, so the descent was a slow, ankle-punishing scrabble on ball bearings over hardpack. I reached camp in the early afternoon, grabbed some water, made hot chocolate, then spent the rest of the day watching the weather and contemplating how best to do Ojos.

Road to the Refugio Murray

Looking back to Vicuñas

El Muerto, with skiable Incahuasi behind

El Muerto and Ojos, with camp near saddle

The lonely path I tread

Fog in the valley north

Tres Cruces in the distance

This entry was posted in Biking, Sierra Challenge. Bookmark the permalink.